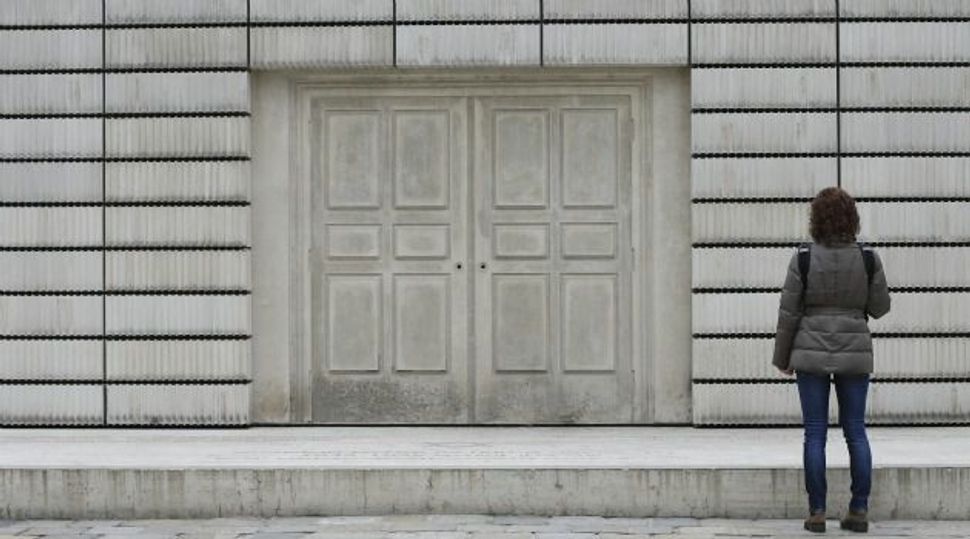 Haunting Past: A woman looks at the Judenplatz Holocaust Jewish memorial monument in the old part of Vienna Image by getty images

Marina Plistiev, a Kyrgyzstan-born Jew, has lived in Vienna for 34 years but still doesn’t like to take public transport.

She recalls the day in 1986 as a teenager when she and her four-year-old brother, whom she’d collected from school with a fever, were told to get off a tram for having the wrong tickets, and nobody stuck up for them, apparently because they were Jews.

“With me (now), you don’t see I’m Jewish but with my children you see that they’re Jews. They get funny looks,” she told Reuters at Kosherland, the grocery store that she and her husband started 13 years ago.

While Austria is one of the world’s wealthiest, most law-abiding and stable democracies, the anti-Semitism that Plistiev senses quietly lingers in a nation that was once a enthusiastic executor of Nazi Germany’s Holocaust against Jews.

After decades of airbrushing it out of history, Austria has come a long way in acknowledging its Nazi past, and the 75th anniversary on Tuesday of its annexation by Hitler’s Third Reich will be the occasion for various soul-searching ceremonies.

But Jewish leaders who fought hard to win restitution after World War Two are on guard against a rising trend in anti-Semitic incidents, occasionally condemned by Austrian political leaders but seen more generally as a regrettable fact of life.

Austrian Jews have grown more vigilant as hooligans have verbally abused a rabbi, Austria’s popular far-right party chief posted a cartoon widely seen as suggestively anti-Semitic, and a debate has opened on the legality of infant male circumcision.

A new poll timed to coincide with the anniversary found that three of five Austrians want a “strong man” to lead the country and two out of five think things were not all bad under Adolf Hitler. That was more than in previous surveys.

The history of Vienna – once home to Jewish luminaries of 20th-century culture such as Sigmund Freud, Ludwig Wittgenstein and Arnold Schoenberg, but later Adolf Eichmann’s testing ground for what would become the “Final Solution” that led to genocide of 6 million Jews – means its Jews are always on the alert.

“Vienna was a very important place for the fate of all European Jews because the automated driving out of Jews was perfected here,” Joachim Riedl, author of several books on Jewish history and Vienna, said at a recent lecture.

Other incidents further afield have heightened concerns. A radical Islamist gunman killed four Jews in France before being shot dead, Hungary’s far-right leader called for a list of prominent Jews to be drawn up help protect national security, and Jewish cemeteries have been desecrated in Austria’s eastern neighbour.

Seeking to avoid being forever branded as the country that welcomed absorption by the Third Reich and refused to atone for it, Austria has made gestures to underline its disowning of both the Nazi past and previous manifestations of anti-Semitism.

Last year, Vienna renamed part of the elegant Ringstrasse boulevard circling the inner city that had been named after Karl Lueger, the mayor who modernised Vienna in the 19th century but became popular for his anti-Semitic rhetoric.

“We cannot choose our history,” said parliament president Barbara Prammer. “We must bear this responsibility.”

Rabbi Andrew Baker of the American Jewish Congress advocacy group has seen a marked change since a 1991 poll that he helped design found that most Austrians thought it was time to put the memories of the Holocaust behind them.

“There was still a social anti-Semitism that kind of defied embarrassment,” he said. “The Austrians have come a long way since then, but they had a long way to go.”

Today’s Austrian Jewish community of 15,000 is diverse, formed mainly of post-war immigrants from eastern Europe and the former Soviet Union.

“This city is something very remarkable. It has a great Jewish history and a great Jewish community, but they have little to do with one another,” said Israeli-born writer and historian Doron Rabinovici, who has lived in Vienna since 1964.

“This community is living in shoes that are too big for it,” said Rabinovici, best known in English for his book “Eichmann’s Jews: The Jewish Administration of Holocaust Vienna 1938-1945”.

Before the 1938 annexation, the “Anschluss”, Austria’s Jewish population was 195,000, the same size as present-day Linz, a provincial capital not far from Hitler’s birthplace.

Two-thirds of them were driven out in the “Aryanisation” programme immediately following the Anschluss and all but about 2,000 left behind were killed in concentration camps. Today’s Austrian Jewish community is almost entirely in Vienna.

“The most terrible thing was not the way hundreds of thousands of Austrians celebrated Hitler’s arrival, but the enthusiasm with which they dispossessed the Jews,” recalled Ari Rath, a Holocaust survivor who fled Vienna at the age of 13.

Rath, who went on to become the long-time editor of the Jerusalem Post, was back in the city of his birth speaking to a group of schoolchildren about his experiences, as part of a parliament-sponsored education project.

“We went from being people to non-persons overnight,” he said in fluent German, a language he suppressed for decades.

“It’s a different Austria now, but you cannot forget it took until 41 years after the war … before Austrians began seriously to confront the Nazi past of this country.”

He was referring to the so-called Waldheim Affair of the mid-1980s, in which President Kurt Waldheim was outed as having hidden his knowledge of German atrocities during his wartime past as a Nazi military officer. The case triggered a long-suppressed international debate about Austria’s history.

Austrians, many of whom had wanted a union with Germany, maintained for decades that their country was Hitler’s first victim, ignoring the fact that huge, cheering crowds had greeted Hitler in March 1938 with flowers, Nazi flags and salutes.

Within days of March 12, tens of thousands of Jews and dissenters were under arrest, imprisoned or packed off to concentration camps. Jews were shut out of jobs and schools, forced to wear yellow badges, and had their property confiscated.

Ariel Muzicant served as president of Austria’s official Jewish organisation, the IKG, from 1998 until last year.

As a young activist during the Waldheim affair, he was key in persuading the IKG to break with its low profile and tackle the backlash of anti-Jewish feeling that the affair unleashed.

“I did not just go and beg. I told them: ‘These are our rights as a Jewish community. These are our demands.’ I wasn’t what you would call a very silent, docile president,” he said.

Muzicant’s drive led to the restitution of Jewish property, laws to recognise Jewish institutions and customs, and the rebuilding or new construction of schools and synagogues.

Things are not perfect, he said, but they could be a lot worse. “Vienna is one of the most beautiful places in the world. If you’re not Jewish, there’s no better place to live.”

Muzicant’s successor at the IKG’s helm, Oskar Deutsch, has a less confrontational approach. “You don’t want to escalate it,” he said. “But it’s a short way from words to deeds.”

The IKG says the number of anti-Semitic incidents in Austria of which it knows doubled last year to 135.

More common than overt attacks in Austria, where strict laws ban Nazi symbolism and parties, are appeals to shared prejudices through remarks or actions that go mostly unchallenged.

The anti-foreigner Freedom Party of Heinz-Christian Strache, who posted the disputed cartoon, consistently scores above 20 percent in opinion polls and has a chance of joining a coalition government after elections this year.

Still, many Viennese Jews freely stroll through the streets in Orthodox garb, especially in districts such as Leopoldstadt, the former Jewish ghetto where many Jews live again today.

The IKG, while condemning anti-Jewish actions anywhere, is hoping to take advantage of the comparatively favourable position of Jews in Austria to boost its depleted population.

It is working with the government to bring at least 150 Jewish families a year into the country, and has already helped some 20 families from neighbouring Hungary.