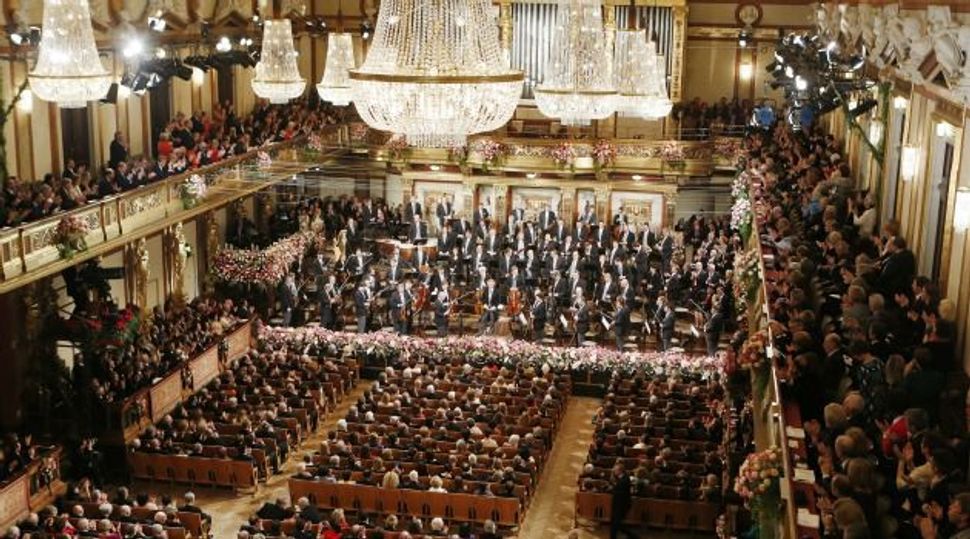 Glitzy Present, Shameful Past: Behind the grandeur of the Vienna Philharmonic lies a shameful past of links to Nazis and honors for war criminals. Image by getty images

The famed Vienna Philharmonic has acknowledged that many of its musicians were Nazi party members during Hitler’s rule and that its director may have delivered a prestigious orchestra award to a Nazi war criminal two decades after the end of World War Two.

The orchestra, which has come under fire for covering up its history, on Sunday night published details for the first time about its conduct during the Nazi era, including biographies of Jewish members who were driven out and sent to death camps.

Austria took until 1991, more than four decades after the war’s end, to formally acknowledge and voice regret for its central role in Hitler’s Third Reich and Holocaust.

The Alpine republic will solemnly mark the 75th anniversary on Tuesday of its annexation by Nazi Germany, an event most Austrians at the time welcomed.

One of the world’s premier orchestras, the Vienna Philharmonic is most popularly known for its annual New Year’s Concert, a Strauss waltz extravaganza that is broadcast to an audience of more than 50 million in 80 countries.

Less well known is the fact that the concert originated as a propaganda instrument under Nazi rule in 1939. The orchestra rarely played the music of the Strauss family, known for the “Blue Danube” and numerous other waltzes, before this period.

On Sunday, the orchestra published a list of recipients of its rings of honour and medals, which were traditionally given to artists but during the Nazi period were given to high-ranking officials and military leaders.

Baldur von Schirach, a Nazi governor of Vienna who oversaw the deportation of tens of thousands of Jews to concentration camps and was sentenced to 20 years in jail by the Nuremberg war crimes tribunal after the war, was awarded the ring in 1942.

In one of the new articles posted on the orchestra’s website (www.wienerphilharmoniker.at), Vienna University historian Oliver Rathkolb wrote that a replacement ring was delivered to Schirach in 1966 or 1967 after he was freed from prison.

According to a reliable witness, the person who delivered the replacement was trumpeter Helmut Wobisch, then the director of the orchestra and a former member of the SS, or paramilitary wing, of the Nazi party, Rathkolb’s article says.

The Vienna Philharmonic’s current chairman, Clemens Hellsberg, told Reuters the orchestra would now have to take a democratic decision as to whether to revoke the awards it made to the Nazis during that period.

Hellsberg wrote a history of the Vienna Philharmonic in 1992, “Democracy of Kings”, in which many of the uncomfortable facts now being published did not appear. He has said he did not have access to all the relevant documents when he wrote it.

Asked on Sunday why it had taken so long to come to this point, he said the orchestra had been quietly working through its history for decades, and now realised it needed to give a proper account of itself online.

Hellsberg was speaking at a preview of a documentary by Austrian state broadcaster ORF about the orchestra’s Nazi-era history, commissioned to coincide with the website additions.

Details of 13 musicians who were driven out of the orchestra over their Jewish origin or relations after Germany’s annexation of Austria in 1938 – five of whom died in concentration camps – were also published on the site for the first time.

Conductor Josef Krips was ousted and worked in a food factory for years, but was allowed back after the defeat of Nazi Germany – and Austria – in 1945, ending the war.

Bernadette Mayrhofer, another of the independent historians from the University of Vienna, said the ostracism of Jewish musicians had begun even before 1938 under Austrofascism, a period of Italian-oriented authoritarian rule in Austria.

“It was known whether somebody had Jewish roots or a Jewish wife,” she told Reuters.

Many orchestra members joined the German Nazi party, illegal at that time in Austria, before the Anschluss (annexation) of 1938. After the war, just four party members were fired during the “de-Nazification” period and another six were pensioned off.

Wobisch, the SS member, was among those sacked in 1945 but managed to rejoin the Philharmonic as lead trumpeter in 1947.

Harald Walser, an Austrian Greens member of parliament who is one of the Philharmonic’s most vocal and persistent critics, welcomed the orchestra’s decision to become more transparent, although he said it did not go far enough.

“It’s a little step in the right direction,” he told Reuters. “But we’re still a long way from having adequate access to the archives.”

The three historians commissioned by the orchestra were given less than two months to write their articles following a decision by the orchestra’s management after this January’s New Year’s concert, an annual focal point for criticism.

All three had previously done work in the field.

Fritz Truempi, one of the three, said it took him three years from 2003 to gain access to research his 2011 book “Politisierte Orchester” (“Politicised Orchestra”), a study of the Vienna and Berlin Philharmonics under National Socialism.

The Vienna Philharmonic says it is not obliged to give public access to its archives, since it is a private organisation, although it does grant access to selected historians and scholars.

The New Year’s Concert helped promote Nazi Propaganda Minister Joseph Goebbels’ desired image of Vienna. He wrote in his diaries that the Austrian capital should be seen as a city of “culture, music, optimism and conviviality”.

Truempi told Reuters: “The New Year’s Concert was invented under the Nazis.”

The orchestra, whose image is closely tied to the 18th century Vienna of Haydn, Mozart and Beethoven, has long been one of Vienna’s biggest tourist attractions an integral part of the Austrian capital’s branding.

Truempi reckons that the orchestra has now finally come to a juncture where it realised that its long-held policy, designed to protect its brand, was actually harming its image.

“I see it also as an issue of image management. For a long time, they tried to maintain a strict control over their brand but, in the end, the political pressure became such that it was the best solution to open up,” he said.