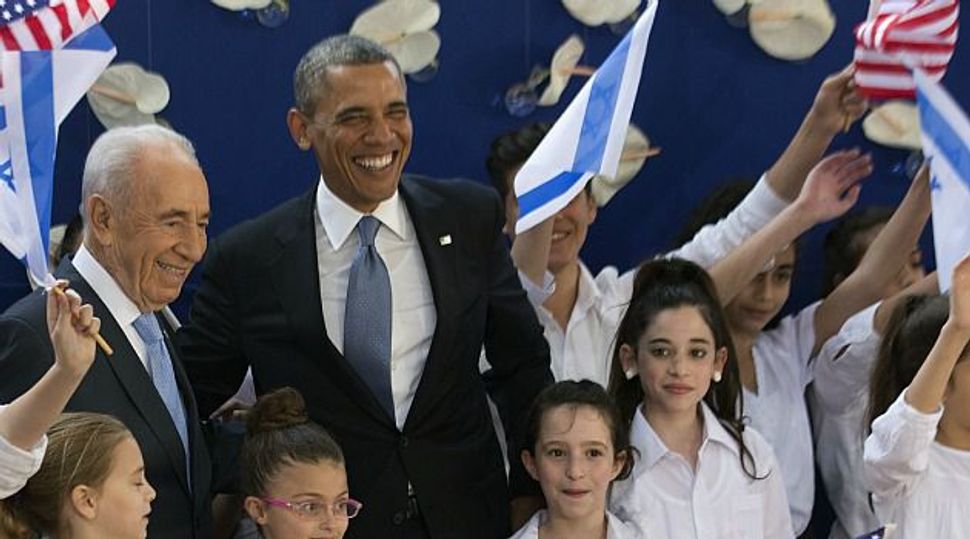 Making his first official visit to Israel, U.S. President Barack Obama pledged on Wednesday unwavering commitment to the security of the Jewish State where concern over a nuclear-armed Iran has clouded U.S.-Israeli relations.

He also stressed the need for Middle East peace at the start of a three-day trip, which is aimed at resetting strained relations with both the Israelis and Palestinians, but is not expected to provide new initiatives or substantial policy moves.

Descending from Air Force One in bright Spring sunshine, Obama briefly embraced Israeli Prime Minister Benjamin Netanyahu, with whom he has notoriously testy ties, before offering smiles and handshakes to waiting ranks of ministers.

?I see this visit as an opportunity to reaffirm the unbreakable bond between our nations, to restate America?s unwavering commitment to Israel?s security and to speak directly to the people of Israel and to your neighbours,? Obama said at a red-carpet welcoming ceremony at Tel Aviv airport.

?I am confident in declaring that our alliance is eternal, is forever,? he said, adding the Hebrew word for forever ? ?Lanetzach? ? to emphasis the upbeat message.

Obama faces strong doubts among Israelis over his pledge to prevent a nuclear-armed Iran and concerns that the civil war in neighbouring Syria might spill over the border, with Western powers reluctant to get involved.

The U.S. president said last week he believed Iran was still more than a year away from developing an atomic weapon and is counselling nervous Israelis to show patience, vowing to use all options to stop a nuclear-armed Tehran.

Shortly after leaving Air Force One, Obama was told by an official to ?follow the red line? marked on the tarmac as he set off to see an Israeli-made Iron Dome anti-missile battery.

Standing alongside Netanyahu, Obama joked: ?He?s always talking to me about red lines? ? a reference to Israel?s demand that Washington establish a red line for Iran?s nuclear programme. ?So this is all a psychological ploy,? he added.

In his own welcoming remarks, Netanyahu cited an Israeli right to self-defence, which he said Obama supported. The Israeli leader had some fence-mending of his own with Obama after the 2012 U.S. presidential campaign during which Netanyahu appeared to favour Obama?s opponent, Republican Mitt Romney.

?Thank you for unequivocally affirming Israel?s sovereign right to defend itself by itself against any threat,? the right-wing Israeli leader said.

Speaking on the tarmac, Obama voiced his hopes for peace – without directly mentioning Palestinians, whom he will meet with on Thursday in the occupied West Bank.

?We stand together because peace must come to the Holy Land,? Obama said. ?Even as we are clear eyed about the difficulties, we will never lose sight of the vision of an Israel at peace with its neighbours.?

U.S.-sponsored peace talks between Israel and the Palestinians have been stalled since 2010 in a dispute over Israeli settlement-building in the occupied West Bank.

The White House has deliberately minimised hopes of any major breakthroughs, a reversal from Obama?s first four years in office when aides said he would visit the Jewish state only if he had something concrete to accomplish.

With both Obama and Netanyahu just starting new terms and mindful that they will have to work together on volatile issues for years to come, they will be looking to avoid the kind of public confrontation that has marked past encounters.

Shortly after landing in Tel Aviv, Obama?s entourage flew by helicopter to nearby Jerusalem and then drove to his city centre hotel. Hundreds of banners boasting of ?an unbreakable alliance? hung from lampposts, but only sparse crowds turned out to watch the president?s motorcade drive through shut-off streets.

Seeking to connect directly with an often sceptical Israeli public, Obama will make a speech to a group of carefully screened students on Thursday afternoon where he is expected to touch on major topics of concern, including Iran.

Israel and the United States agree that Iran should never get a nuclear bomb, dismissing Tehran?s assertion that its atomic programme is peaceful. However, the two allies are at odds over how fast the clock is ticking down on the need for preventative military action should diplomacy fail.

U.S. officials say Obama, the fifth sitting U.S. president to travel to Israel, will urge further caution, with Washington worried that a threatened Israeli unilateral strike might drag the United States into another Middle East war.

Obama will fly by helicopter the short distance between Jerusalem and the West Bank city of Ramallah on Thursday to meet Palestinian President Mahmoud Abbas, avoiding having to cross the Israeli separation barrier that divides the two cities.

Abbas?s allies have expressed bitter disappointment over the lack of fresh U.S. moves. ?It?s not a positive visit,? said Wasel Abu Yousef, a senior official in the Palestine Liberation Organization, led by Abbas.

Netanyahu told Obama at the airport that he was committed to securing peace with the Palestinians, but Western diplomats in Jerusalem remain largely sceptical.

The Israeli leader has just forged a coalition government containing fervent supporters of settlement building in the West Bank, which the U.S. has strongly criticised as a major impediment to lasting peace with the Palestinians.

Along the reception line, Obama stopped only briefly to shake hands with pro-settler leader Naftali Bennett, but had a long exchange with new Finance Minister Yair Lapid, who heads a centrist movement and has said peace-making is a priority.