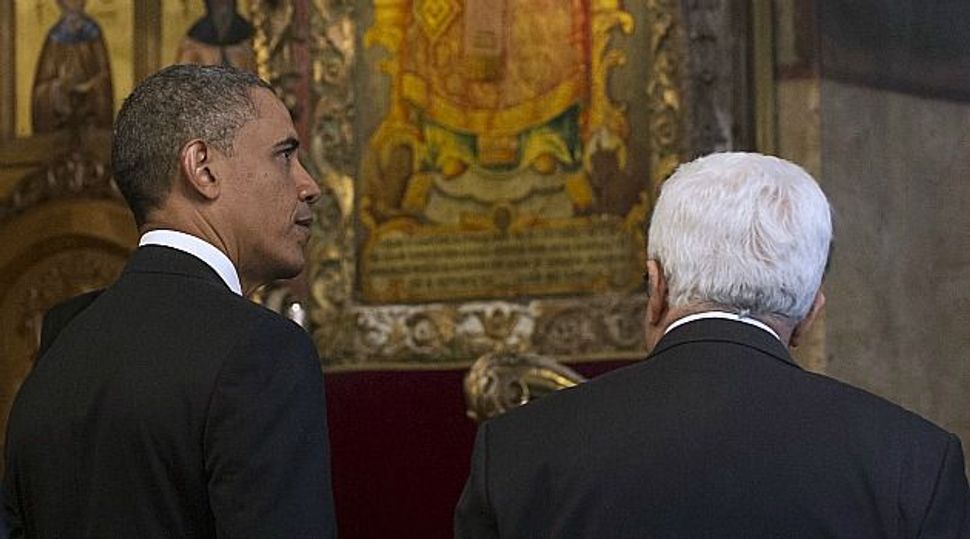 Where?s Our Beef? Barack Obama got a chilly reception from Palestinians and the rest of the Arab world. They are wondering what happened to the famous promise of his Cairo speech vowing a new approach to the Mideast conflict. Image by getty images

President Barack Obama was greeted with calls of “We love you” when he visited Cairo in his first term, seeking to turn the page on the Bush era with talk of a new beginning for ties between the United States and the Muslim world.

Four years on, Egyptians who attended the Cairo University speech feel let down, a view that hardened when Obama, who has had a volatile relationship with Prime Minister Benjamin Netanyahu, showed solidarity with Israel’s leader during his visit there, and stressed the depth of U.S.-Israeli ties.

“If I saw Obama today, I’d say: ‘What happened?’,” said Ahmed Samih, 34, one of several people who shouted out support for the president during his 2009 speech that aimed to change perceptions of the United States shaped by the wars in Iraq and Afghanistan launched by his predecessor, George W. Bush.

Obama connected with many of his listeners back then by quoting from the Koran and urging an end to a “cycle of suspicion and discord” with the Muslim world.

Some left believing they had witnessed history. They cited his tough line on Israeli settlements as one example of a shift.

Obama’s first term brought some change: American troops left Iraq at he end of 2011. But it also was a big disappointment for those hoping for an overhaul of U.S. Middle East policy they have long seen as skewed towards Israel.

With civil war raging in Syria, and the Arab world reshaped by popular uprisings since 2009, some of Obama’s former fans do not hold out hope of change in his second term. Regional turmoil had “made him deepen the strategic relationship with Israel”, Ezzat Ibrahim, a journalist who attended the 2009 speech, said.

The disillusionment was reinforced when Obama arrived in Israel to a warm reception from Netanyahu. “There was new chemistry between them,” said Ibrahim. “The people are very disappointed with this warm relationship.”

The mood angered Palestinians who blame the collapse of U.S.-backed peace negotiations on the Israeli leader’s expansion of Jewish settlements on land where they want their state.

In scenes reminiscent of Cairo, Obama received a rapturous reception from Israeli students when he delivered a speech in Jerusalem on Thursday. He called for peace but offered no new ideas on how to break the deadlock in negotiations.

And despite his call for a concerted effort to secure a Palestinian state, Palestinian officials saw no sign Obama was ready to get tough with Israel – a departure from the Cairo speech in which he was seen to pressure Israel over settlements.

“The United States does not accept the legitimacy of continued Israeli settlements,” he said at the time. “It is time for these settlements to stop,” he added.

“I DON’T SEE A GREAT PRESIDENT”

The statement encouraged the Palestinian leadership to demand a full halt to settlement building before any resumption of talks. A few months later, the United States put pressure on the Palestinians to start talks without a freeze.

He also drew Arab criticism for saying that now is the time for the Arab world to take steps towards normalising relations with Israel – a concession Arabs link to progress in peace talks.

“Coming to the Middle East at the start of his second term might be a good sign, but listening to what he said, I don’t see a great president or one that is capable of doing great things,” Hassan Nafaa, a political scientist at Cairo University, said.

With high hopes for Obama, Nafaa flew back to Egypt in 2009 to attend the speech. “The expectations were sky-high,” he said. “That was the kind of speech we were not used to from a president of the United States.”

But that perception quickly changed as Obama was seen to back down in a stand-off with Netanyahu over settlement building. “Obama was put under a harsh test and he failed that test, and for me the settlements was the real issue,” he said.

Policy towards Israel was not the only area where Obama disappointed his Cairo audience. Having spoken of “government of the people and by the people”, Obama was criticised by Egyptian revolutionaries for being slow to drop U.S. support for veteran autocrat Hosni Mubarak during the 2011 uprising.

Ragia el-Alfy, 23, recalls how people broke into tears during the Obama speech.

“I felt that there was hope in real change, especially because he came after the Bush era. But it vanished so quickly,” she said. “He doesn’t force the Israelis to stop their settlements … he doesn’t take action.”