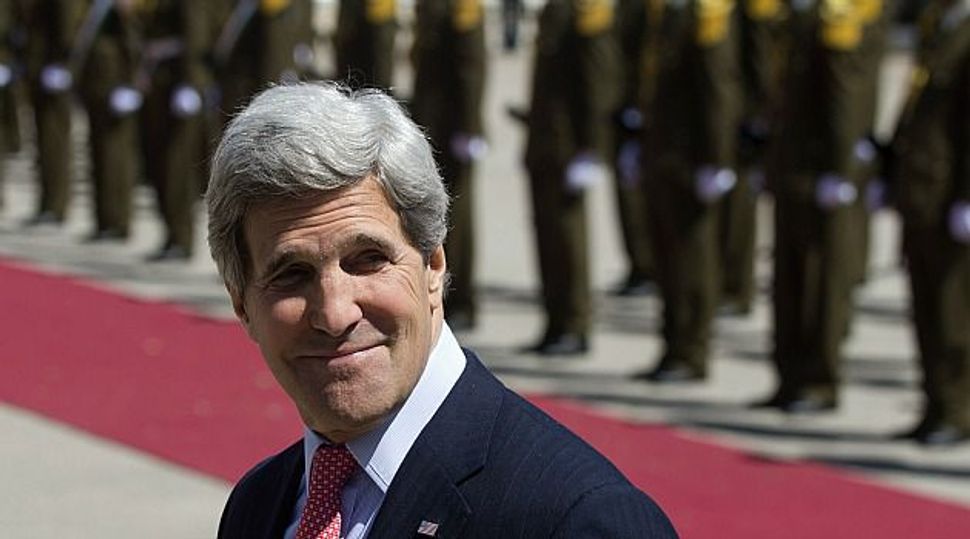 The official gave no details on the meetings, which followed President Barack Obama’s visit to Israel and the Palestinian Territories this week in which he called for fresh diplomatic efforts, but offered no new peace proposals of his own.

Kerry, who accompanied Obama on his trip and then stayed on in the region, met for two hours with Abbas in Jordan’s capital of Amman, a Palestinian source told Reuters. He then went to Jerusalem for talks with Netanyahu that stretched past midnight.

“Secretary Kerry had useful follow up meetings with both President Abbas and Prime Minister Netanyahu. These meetings were the natural next step to the discussions the president and Secretary Kerry had this week (with Israeli and Palestinian officials),” said the senior U.S. State Department official.

“In both meetings, Secretary Kerry reiterated that peace is not only possible, but necessary for the future of the Israeli and Palestinian people,” added the official, who spoke on condition of anonymity.

A Palestinian source said Kerry’s meeting with Abbas had focused on “trying to find common ground between both sides to see if there is ground to resume peace talks”, and cautioned against expecting any quick results.

“It could take some time” to achieve a formal resumption of negotiations, said the source, who spoke on condition of anonymity.

While Obama made Israeli-Palestinian peace a priority in his first term, peace talks quickly ran aground in late 2010 in a dispute over Jewish settlement building in land Israel captured in a 1967 war. Palestinians seek this land for a state.

Making his first trip to Israel as president, Obama appealed on Thursday to the Israeli people to put themselves in the shoes of stateless Palestinians and recognize that settlement activity in occupied territory hurts prospects for peace.

In a showcase speech in Jerusalem to Israeli university students, Obama coupled his plea with an acknowledgement of the Jewish state’s security concerns in a region destabilized by the West’s nuclear standoff with Iran and civil war in Syria.

Speaking ahead of his trip, U.S. officials said Obama would not offer his own peace proposals and said the trip was a chance to take the temperature on both sides and to see how and whether it might be possible to revive direct Israeli-Palestinian talks.

Obama promised that Kerry, Washington’s new top diplomat, would dedicate time and energy to the Israeli-Palestinian problem, one in which the president failed to make progress during his first term.

Obama ended his trip with one tangible accomplishment, having engineered a call between Netanyahu and Turkish Prime Minister Tayyip Erdogan that enabled the two U.S. allies to overcome a diplomatic crisis sparked by the deaths of nine Turks in 2010 during an Israeli commando raid off the Gaza Strip.

Israel apologized to Turkey on Friday for killing the nine Turkish citizens in its naval raid on a Gaza-bound flotilla and the two feuding U.S. allies agreed to normalize relations.

The rapprochement could help regional coordination to contain spillover from the Syrian civil war and ease Israel’s diplomatic isolation in the Middle East as it faces challenges posed by Iran’s nuclear program.

Kerry issued a brief written statement saying that he and Netanyahu had discussed the matter and that he looked forward to the quick, full normalization of ties.

“The reconciliation between Israel and Turkey is a very important development that will help advance the cause of peace and stability in the region,” Kerry said. “This will help Israel meet the many challenges it faces in the region.”