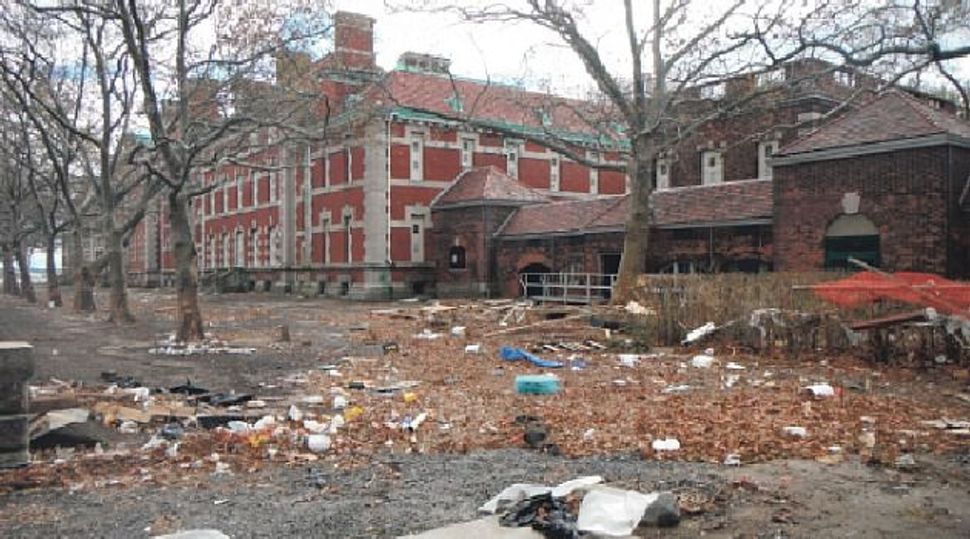 Untold Damage: Sandy inflicted an estimated $59 million in damage to Ellis Island and the Statue of Liberty. The immigrant museum won?t be open anytime soon. Image by getty images

After an extended closure due to Hurricane Sandy, fittingly, the Statue of Liberty will re-open on July 4. However, there remains no firm projection of when Ellis Island will be open to the public.

A National Parks Service representative said that they are still analyzing infrastructure repairs on Ellis Island before making a decision.

Senator Charles Schumer (D-NY) announced the date with park officials. The statue itself was undamaged during Hurricane Sandy, but workers have been trying to repair infrastructural damage for months.

Liberty and Ellis Islands received almost $60 million in federal funds for repairs. Documents from the Ellis Island museum were recently shipped to be stored in Maryland. There was also extensive flooding in the museum’s basement, which disabled the heating, electrical, sewage and HVAC systems.

On October 28, one day before the storm hit the New York area, the statue’s crown re-opened after a $30 million renovation. Schumer said there would be access to the crown on July 4.

he U.S. National Park Service is relocating security operations for the Statue of Liberty over the objections of the New York Police Department, saying on Friday it will move screening to Ellis Island from Manhattan when the statue reopens on July 4.

The statue has been closed to the public since late October because of Superstorm Sandy.

The landmark has been presumed to be a potential target since the hijacked-airliner attacks of Sept. 11, 2001. Officials closed access to the inside of the statue after the attacks and did not reopen it for almost eight years.

The nearly 4 million tourists a year who visit Liberty Island, home of the statue in New York Harbor, previously went through airport-style screening in Manhattan before boarding ferries. That screening will move to Ellis Island, which sits next to Liberty Island and is home to an immigration museum.

“The Park Service’s decision to reopen the Statue of Liberty without screening in Manhattan was made against the NYPD’s recommendation and leaves unresolved the vulnerability to attack on ferry passengers en route to both Liberty and Ellis Islands,” NYPD Deputy Commissioner Paul Browne said.

The decision to move security operations came after a lengthy review, said Linda Friar, a spokesperson for the National Park Service.

The contract for the Manhattan security tent, which was badly damaged in the hurricane, expires at the end of March. Even before Sandy hit, the city’s Parks and Recreation Department had asked the Park Service to remove the tent, Friar said.

The initial security facilities on Ellis Island will be temporary and the Park Service plans to build a permanent structure that can handle extreme weather.

U.S. officials announced plans on Tuesday to reopen the Statue of Liberty to tourists on the Independence Day holiday after a $59 million project to repair damage on Liberty and Ellis islands caused by Sandy.

The museum at nearby Ellis Island, where 12 million immigrants entered the United States from 1892 to 1954, will remain closed until further notice.