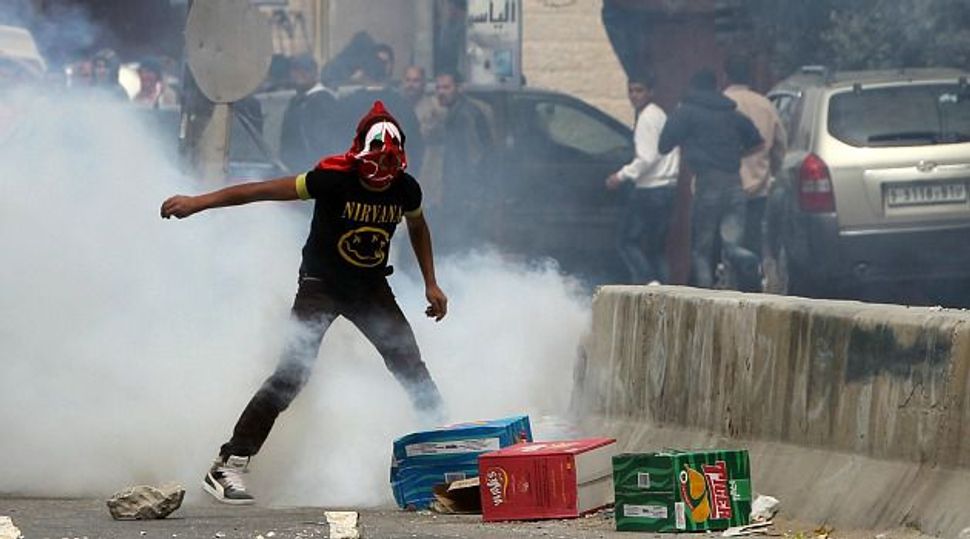 Land Day: Palestinian protesters took to the streets to mark Land Day, the anniversary of a deadly clash with Israeli soldiers in 1976. Image by getty images

Palestinians protested in the West Bank and the Gaza Strip on Saturday and a few were lightly hurt in clashes with Israeli soldiers on the 37th anniversary of a landmark event for Israel’s Arab minority.

The Palestinians and Israeli Arabs each commemorated the killing of six Arab citizens of the Jewish state by Israeli security forces during protests in 1976 over government land confiscations in northern Israel, an event known as “Land Day”.

Two Israeli soldiers were also lightly hurt in a stone-throwing clash, one of a few at various locations in the occupied West Bank, as they used tear gas and other non-lethal means to disperse the rioters, an army spokeswoman said.

Palestinian medical sources said a handful of protesters were treated mainly for inhaling tear gas during the clashes that lasted about an hour.

Palestinian Prime Minister Salam Fayyad said that as part of the day’s events, he had planted an olive tree in the West Bank area known as E1 that Israel has earmarked for a future settlement.

Troops patrolling the border between Israel and the Gaza Strip used live fire to disperse protesters who came close to the fence, the military spokeswoman added. A Gaza hospital source said nobody was hurt.

Israel is wary of growing unrest in the Palestinian Territories, with peace talks stalled since 2010 and Palestinian leaders refusing to return to the negotiating table until Israel halts settlement building in the West Bank.

Most annual remembrances in Israel have largely passed off quietly. In the Israeli Arab town of Sakhnin, the centre of the violence in 1976, thousands gathered for a rally which was addressed by lawmakers and community leaders.

Israel’s Arabs make up about 20 percent of the Jewish state’s population of almost eight million.