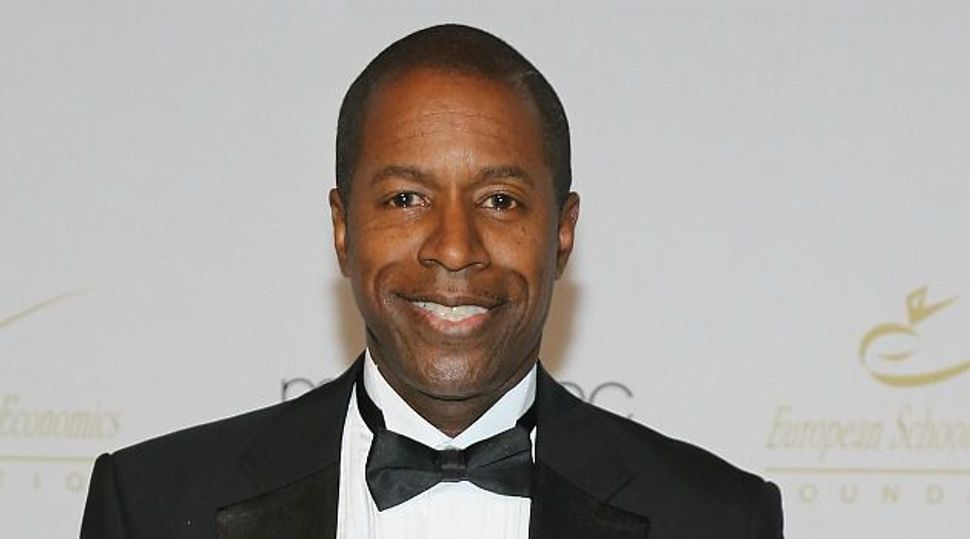 Pay To Play: Malcolm Smith, a state Senator who is considering a run for New York mayor, was charged with bribery in a wide-ranging corruption probe. Image by getty images

A high-ranking Democratic New York State senator was arrested on Tuesday and charged with trying to buy a place on the Republican ticket in the city’s next mayoral race, an effort that prosecutors said was part of a wide-ranging bribery scandal and reflected pervasive corruption in New York politics.

Five other politicians, all Republicans, were also arrested and charged with collectively accepting more than $100,000 in bribes in meetings in parked cars, hotel rooms and state offices, according to court papers.

Authorities described the scheme – potentially one of the biggest political scandals to hit New York in years – as an attempt to game the city’s first wide-open mayoral election in more than a decade. New York will choose a new mayor in November, before Michael Bloomberg’s third term comes wraps up at year’s end.

The charges center on State Senator Malcolm Smith, a Democrat from Queens, who prosecutors said made payments to a city councilman to set up meetings with top New York Republicans to assist in getting him on the mayoral ballot.

Smith and the councilman, Daniel Halloran, a Republican from Queens, were among the six politicians arrested on Tuesday morning in connection to the bribery scandal.

Charges against the six include bribery, extortion, and wire and mail fraud.

“From time to time the question arises, how common is corruption in New York?” said Manhattan U.S. Attorney Preet Bharara at a late-morning press conference. “Based on the cases that we have brought and continue to bring, it seems downright pervasive.”

Recent years have seen another high-ranking New York state Senator, Democrat Pedro Espada Jr., convicted of stealing more than $600,000 from Soundview HealthCare Center, a partly federally funded company he worked at; and a pay-for-play scandal at the state’s pension fund that saw the state comptroller resign and serve 21 months in prison.

Smith’s lawyer, Gerald Shargel, defended his client but said he had not yet fully reviewed the charges. “Malcolm Smith is a dedicated public servant who has served … his constituents in an exemplary fashion,” Shargel said.

Representatives of the other five officials all either declined to comment or did not respond to phone calls on Tuesday morning.

The scandal, uncovered by FBI agents working with an undercover investigator and a cooperating witness, allegedly involved a series of secret meetings in restaurants, hotels and Smith’s Senate office in Albany, New York in which bribes were discussed or money exchanged.

Court documents released on Tuesday showed the people alternating between brazen and cautious behavior as they solicited and received bribes.

At a September meeting at a Manhattan restaurant at which he received $7,500 in cash, City Councilman Halloran told a confidential witness working with the FBI, “Money is what greases the wheels – good, bad or indifferent.”

At other times they were warier. During a February meeting with an undercover FBI agent he believed to be a real estate developer, Queens Republican official Tabone frisked the agent to check for a recording device. He was unsuccessful and the conversation was recorded anyway.

Prosecutors said that two of the politicians charged in the scheme – Tabone and Savino – received a total of $40,000 in bribes for promising to support Smith. Halloran, the Queens Councilman, was said to have gotten $20,500 for setting up a meeting with people Smith believed were supporters but were in fact the cooperating witness and an undercover FBI agent.

Two of the other politicians arrested on Tuesday, Jasmin and Desmaret, were charged for their role in a related bribery incident involving a proposed real estate project in Spring Valley, a suburban town located about 35 miles (56 km) north of New York City.

Smith’s motivation was winning a spot on the ballot as a Republican mayoral contender, since that primary is seen as considerably less competitive than the Democratic contest in liberal New York.

In 2001, billionaire Michael Bloomberg – a lifelong Democrat – won the right to run for mayor as a Republican, though he later abandoned his party affiliation altogether. As Bloomberg prepares to leave City Hall after three terms in office, a handful of Democrats, including Smith, have sought Republican support for their candidacies.

To be listed on the ballot of the other political party, a New York politician must win the approval of the party chairman in at least three of the city’s five counties.

In one January meeting, Smith, who has represented his eastern Queens district since 2000, and the unnamed cooperating witness discussed the cost of the bribes, prosecutors said.

“It’s worth it as long as they’re going to do it,” Smith said, according to court papers released on Tuesday. “He can’t tell you he’s going to do it and then doesn’t do it … You know, don’t waste a pretty penny.”

Halloran helped him in hopes of securing a position as a deputy police commissioner or deputy mayor in a potential Smith administration, U.S. Attorney Bharara, said.

“The integrity of the electoral process for the voters of New York City must be preserved,” Cox said in a statement.