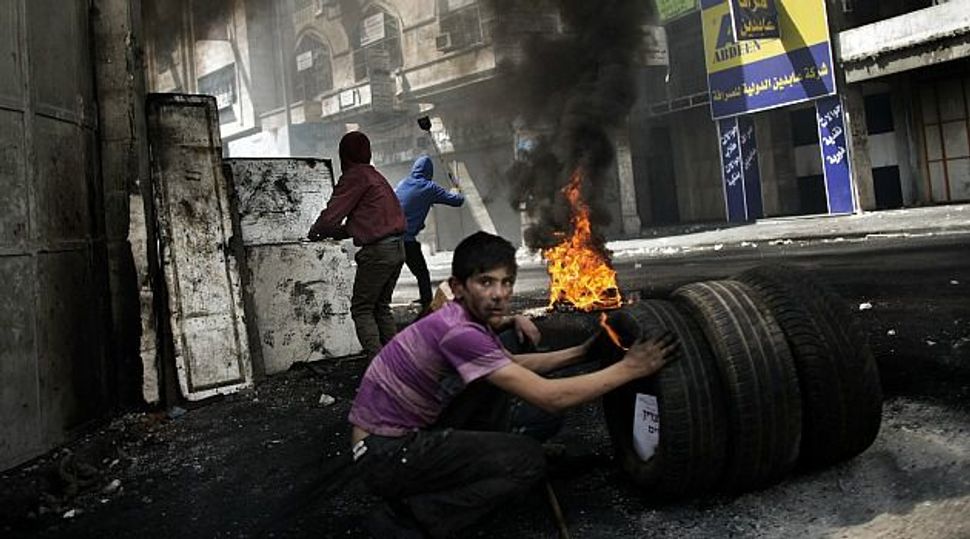 As demonstrations flared in the West Bank over a Palestinian prisoner?s death, Israel also traded attacks with militants in Gaza. It was the first major outbreak of violence there since the conflict last year. Image by getty images

Israel pressed Hamas on Wednesday to rein in rocket-firing militants in the Gaza Strip after the most serious outbreak of cross-border hostilities since the ceasefire that ended an eight-day war in November.

The flare-up, sparked by anger in Gaza over Tuesday’s death from cancer of a Palestinian prisoner held by Israel, included the first Israeli air strike in the Hamas-run enclave since the truce.

By afternoon, the frontier had fallen quiet, an indication that Israel and Hamas were weighing their moves carefully after four months of relative calm that has enabled Gaza residents to rebuild and Israelis near the border to live without the familiar blaring of sirens warning of incoming rockets.

The Israeli military said two rockets fired from Gaza had struck southern Israel in a morning attack on Wednesday, causing no casualties, hours after its planes targeted “two extensive terror sites” in the north of the territory.

Israel launched the air strike after three rockets hit its south on Tuesday. An al Qaeda-linked group, Magles Shoura al-Mujahadeen, claimed responsibility for that attack and Wednesday’s salvo, saying it was responding to the death of the 64-year-old prisoner, Maysara Abu Hamdeya.

Tuesday was the third time since the November truce that rockets from Gaza had struck Israel.

But with a new government and defence minister now in place after weeks of coalition-building since a January election, Israel seemed keen to show resolve, putting the onus on Hamas to prevent any rocket fire.

“(Israel’s armed forces) decided to attack overnight in order to signal to Hamas that we will not suffer any strike on the south. And any shooting will meet a response, in order to restore quiet for the south soon,” Brigadier-General Yoav Mordechai, the chief military spokesman, said on Army Radio.

“I assess that Hamas has no interest in seeing the situation deteriorate,” he said. “Our goal is to maintain the quiet.”

Spillover from the civil war in Syria – mortar and machinegun fire toward Israeli troops in the occupied Golan Heights – has also heightened Israeli concern.

“We will absolutely not allow any sporadic fire toward our citizens and our forces,” Defence Minister Moshe Yaalon said in a statement, referring to the situations on the frontiers with both Gaza and Syria.

Israeli tanks fired at a Syrian post on Tuesday after one such incident in the Golan Heights, which Israel captured in a 1967 Middle East war. Israel’s military said it was unclear whether rebels or forces loyal to Syrian President Bashar al-Assad were manning the position.

In Gaza, Hamas has at times cracked down on hardline Islamist Salafi groups, seeing them as a threat to the stability of the impoverished, Israeli-blockaded territory.

But Hamdeya’s death touched a nerve among Palestinians, who regard their brethren in Israeli jails as heroes in the fight for statehood.

Palestinian officials accused Israel of failing to provide timely medical care for Hamdeya, who died in an Israeli hospital before a procedure for his early release on medical grounds was completed.

Israel denied negligence in treating Hamdeya, who was serving a life term over an attempt to blow up an Israeli cafe in Jerusalem in 2002 during a Palestinian uprising.

Commenting on the Gaza situation, Richard Serry, the U.N.’s special coordinator for the Middle East peace process, said it was of “paramount importance to refrain from violence”.

He said in a statement that renewed violations of the ceasefire threatened to unravel Egyptian-brokered understandings that included an easing of Israel’s restrictions on imports into the Gaza Strip.

Egypt mediated the truce after fighting in which some 170 Palestinians and six Israelis were killed. Israel launched its Gaza offensive with the declared aim of ending Palestinian rocket fire into its territory.

Hamas seized control of the Gaza Strip from Western-backed Palestinian President Mahmoud Abbas’s Fatah movement in 2007 after winning an election a year earlier.

Palestinians want to establish a state in the enclave along with the West Bank and East Jerusalem, territories Israel captured in the 1967 war.