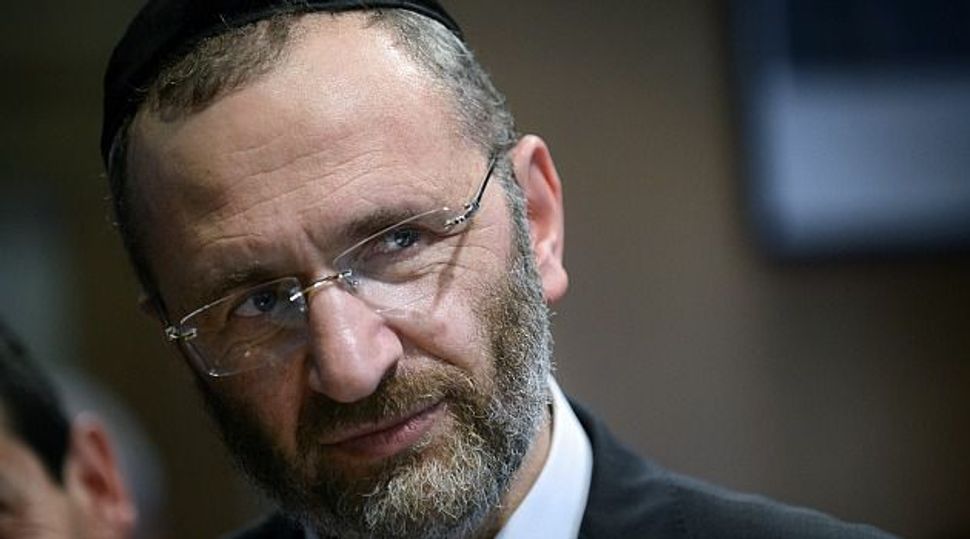 Book of Lies: French chief rabbi Gilles Bernham admits some passages in his book were lifted from other authors. Image by getty images

Gilles Bernheim, The Chief Rabbi of France has admitted that he plagiarized parts of his book, “Forty Jewish Meditations. “

“The plagiarizing unmasked on the Internet is true,” Bernheim wrote in a statement from Israel, where he was spending the Passover holidays, Le Monde reported.

Suspicion about the origins of the book, published in 2011 by Stock editions, spread in March after a website called Strass de la philosophie noticed similarities between Bernheim’s text and the ideas discussed in an interview of philosopsher Jean-François Lyotard by Elizabeth Weber for her 1996 book, “Questioning Judaism.”

According to Le Monde, Bernheim— citing lack of time – relied on a student for much of the research and writing of the book.

“It is the one and only time I made such an arrangement,” he wrote in the statement released Tuesday. “It was a terrible mistake…I have been fooled. However, I am responsible.”

Soon after the affair started, Berheim explained that some of the meditations in his book were based on transcripts of lessons he gave in the 1980s, when he was a rabbi for French Jewish students, Haaretz reported. Transcripts of these lessons were often distributed to students, he said, implying that Lyotard had in fact plagiarized him, rather than the opposite.

Weber, who interviewed Lyotard before his death in 1998, denied Bernhaims claims, explaining that the philosopher had answered her questions without notes.

The Haaretz report added that Jean-Noel Darde, a professor at Paris 9 University, wrote on his website that Bernheim might also have borrowed from books by Elie Wiesel, Jean-Marie Domenach and Charles Dozyinski.

“I apologize to the authors whose texts have been copied, to the people who have read these ‘meditations’ and to my publisher who was not informed of the existence of an outsider,” he wrote in his statement on Tuesday.

As the Grand Rabbi of France, a position he has held since 2008, Berheim is the main religious figure for 600,000 French Jews, the third-largest Jewish community in the world after Israel and the United States.

When asked by Le Monde if he would resign, Bernheim replied he didn’t think it was necessary.

Bernheim has asked that his book be removed from bookstores and struck from his bibliography.