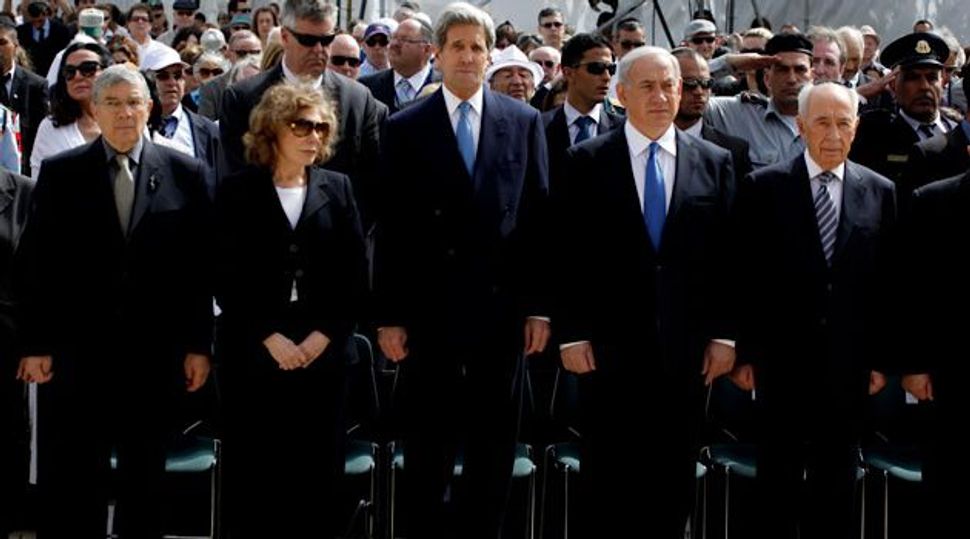 In a solemn address, both leaders warned of the anti-Semitism that still exists in the world, 70 years after the Holocaust. Peres addressed the rise of extreme right parties in Europe as an example of the need for vigilance, JTA reported.

“The map of Europe still contains local stains of anti-Semitism,” he said.“Racism erupted on that land in the last century and dragged it down to its lowest point. Ultimately the murder which came from her, damaged her.”

“Not all the flames have been extinguished. Crises are once again exploited to form Nazi parties, ridiculous but dangerous. Sickening anti-Semitic cartoons are published allegedly in the name of press freedom.”

Speaking to Israeli leaders, foreign diplomats and Holocaust survivors, Netanyahu declared that far from being a thing of the past, hate of the Jews had evolved into hate of Israel, Haaretz reported.

Peres also expressed his incredulity that people and states can still deny that the Holocaust ever occurred.

“The enlightened world must ask itself how — so soon after the ovens were extinguished, after the fight against the Nazi Satan claimed such a heavy death toll from the allied forces — a regime the likes of the one in Iran can still publicly deny the Holocaust,” he said.

According to Yad Vashem, the central theme for this year is defiance, in remembrance of the Warsaw Ghetto Uprising, which occurred 70 years ago this year, The Jerusalem Post reported.

At 10 a.m. Monday morning, sirens sounded for two minutes all over Israel to mark the day, after which officials— including John Kerry, who participated along with Netanyahu and Peres — and survivors gathered to lay wreaths and light torches for the Warsaw Ghetto memorial at Yad Vashem’s Hall of Remembrance.

The “Unto Every Person There is a Name” observance, during which all the names of Holocaust victims were read out in the Knesset, also took place Monday morning.

In a special addition to the ceremonies, Peres addressed 11,000 youths from Israel and around the world currently in Auschwitz, Poland, as part of the annual “March of the Living” trip.

“You are on a march that cannot be compared,” Peres said in the recorded speech, which was broadcasted at 5 p.m. Israel time. “It is a march from the lowest point to the highest peak.”

“There are less Jews today than there were on the eve of World War II. The pain, wounds and void still exist. They live inside us…” he added. “Within only three years, the biggest miracle happened to us. The revival of the Jewish people: The State of Israel, which emerged against all odds.”