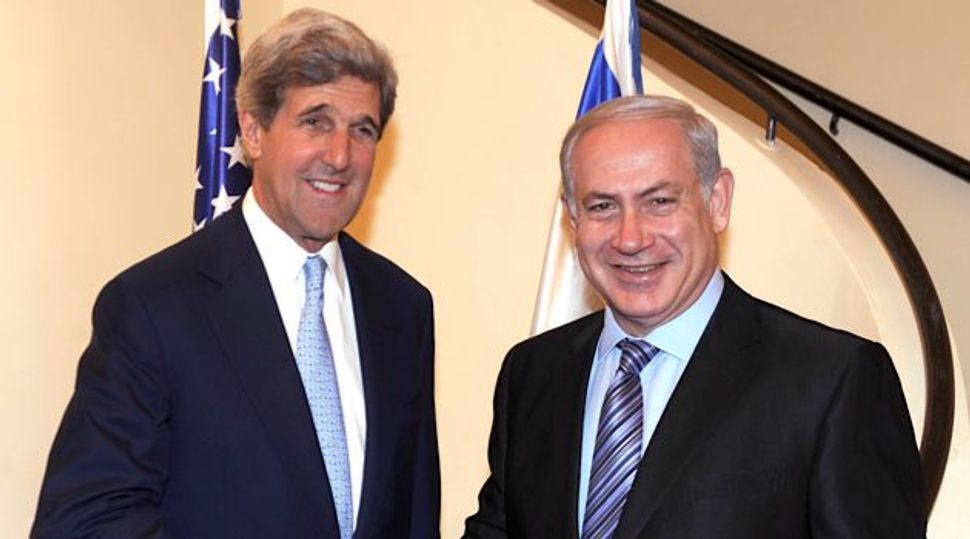 U.S. Secretary of State John Kerry said on Monday he is trying to break down mistrust on both sides of the “festering” conflict between Israelis and Palestinians and would not rush into a new peace process.

Making his third visit to the region in less than three weeks, Kerry met Palestinian President Mahmoud Abbas in Ramallah on Sunday night and was to sit down to dinner with Israeli Prime Minister Benjamin Netanhayu on Monday night.

“I am intensely focused on this issue … because it is vital, really, to American interests and to regional interests to try to advance the peace process and because this festering absence of peace is used by groups everywhere to recruit and encourage extremism,” Kerry told reporters traveling with him.

While Kerry gave no details of his talks, Palestinian officials said he had revisited a 2002 Arab League proposal that offered full Arab recognition of Israel if it gave up land seized in a 1967 war and accepted a “just solution” for Palestinian refugees.

“The U.S. discussed a renewal of the initiative from the Arab League’s part,” Abbas aide Nimr Hammad told Reuters.

Rejected by Israel when it was originally proposed at a Beirut summit in 2002, the plan has major hurdles to overcome.

Israel objects to key points, including a return to 1967 borders, the inclusion of Arab East Jerusalem in a Palestinian state and the return Palestinian refugees to what is now Israel.

Kerry also met with Israeli President Shimon Peres on Monday, following the ceremonies marking Holocaust Remembrance Day, JTA reported. The secretary of state said it was an honor “to share in the uniqueness of that expression of sorrow and honor for this remarkable moment in history which we mark.”

Kerry said he was trying to chip away at the mutual mistrust that has built up during the conflict, whose main issues include borders, the status of Jewish settlements on the West Bank, the fate of Palestinian refugees and the status of Jerusalem.

“One of the reasons for these early interventions is to get right at the issue of mistrust,” Kerry told reporters traveling with him. “I am convinced that we can break that down but I am not going to do it under … time limits.

“This process should not be rushed subject to some sort of external time limit or artificial process because it’s too important,” he added. “So I am having discussions about those steps that would get at this issue of mistrust.”

Kerry said in addition to easing the mutual suspicion that has built up during the more-than-six-decade conflict, he is also looking at ways to bolster the economies of the region, something he believes could improve the climate for peace.

Economic prospects for Palestinians in the West Bank are limited by Israeli restrictions on trade, and the Palestinian government is deeply dependent on foreign aid and bank credit to pay its bills. Help from abroad has plunged in recent years.

Kerry provided no details, however, on precisely how he hoped to revive Israeli-Palestinian peace talks, which collapsed in late 2010 amid a disagreement over Israeli settlement construction on land it seized during a 1967 war.

The Palestinians want the land to establish their own state.

“There is a quiet strategy, which I intend to keep quiet … in order to have the best chance of trying to get something moving,” Kerry said.

Hammad, the Palestinian official, said Israel wanted to modify the Saudi-inspired Arab League Initiative so that it took “the form of a regional cooperation or security” accord.

“Clearly, this is something that is not acceptable from the Palestinian side,” he said.

Israel is wary of the Arab plan partly because it would entail handing back the Syrian Golan Heights, as well as re-dividing Jerusalem, of which Israel annexed the captured Arab eastern part after the 1967 Middle East War.

Most Israeli politicians also oppose the return of Palestinian refugees to what is now the Jewish state and want to hold on to major settlement blocs in the occupied West Bank.

A senior State Department official denied that Kerry himself had suggested modifying the Arab initiative.