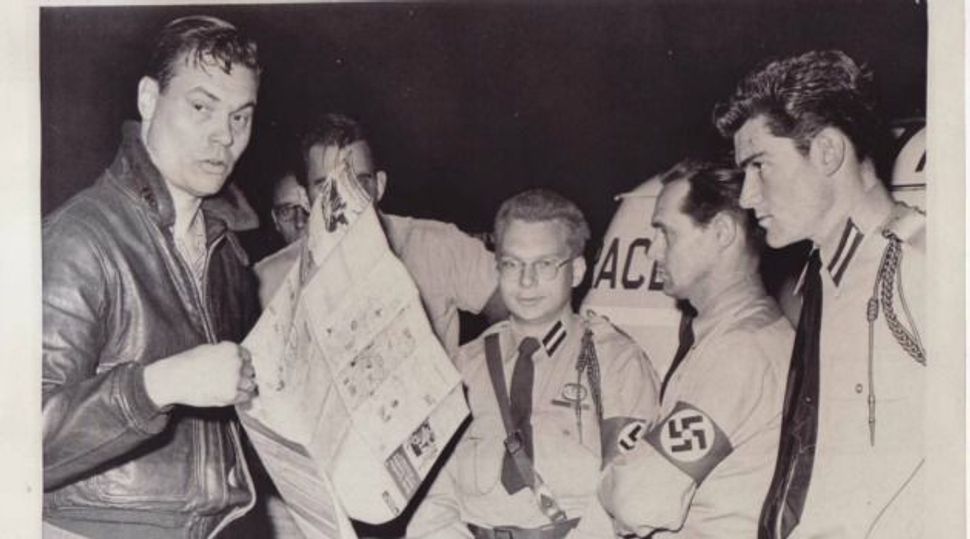 Secret Past: KKK leader Dan Burros, center, killed himself after his Jewish heritage was revealed in a groundbreaking New York Times story.

Phillips, who as a journalist was admired for his style and integrity, died Tuesday in Manhattan from complications of pneumonia. He was 85.

Phillips’ profile of Daniel Burros documented the rise of the 28-year-old Queens man in the ranks of the Klan. Burros was the grand dragon in the New York State Klan, a chief organizer of the national organization and a former national secretary of the American Nazi Party.

The article, which appeared on the front page of the Sunday New York Times on Oct. 31, 1965 under the headline “State Klan Leader Hides Secret of Jewish Origin,” said Burros was Jewish, attended Hebrew school and had a bar mitzvah.

“The article remains a case study in a reporter’s perseverance in the face of intimidation,” The New York Times wrote in an obituary for Phillips, a one-time copy boy and cub reporter. “It is also a case study in the severe, unintended consequences that the airing of fiercely guarded truths can have for the guardian: despite threatening to kill Mr. Phillips if the article went to press, Mr. Burros, in the end, killed only himself.”

Phillips’ story has made Burros a character of fascination to this day. Many cite Burros as the epitome of a self-hating Jew. In 2001, “The Believer,” a film based loosely on Burros’ life, was released to critical acclaim.

Phillips resigned from the newspaper in 1973 to pursue a life of religion, according to the Times.