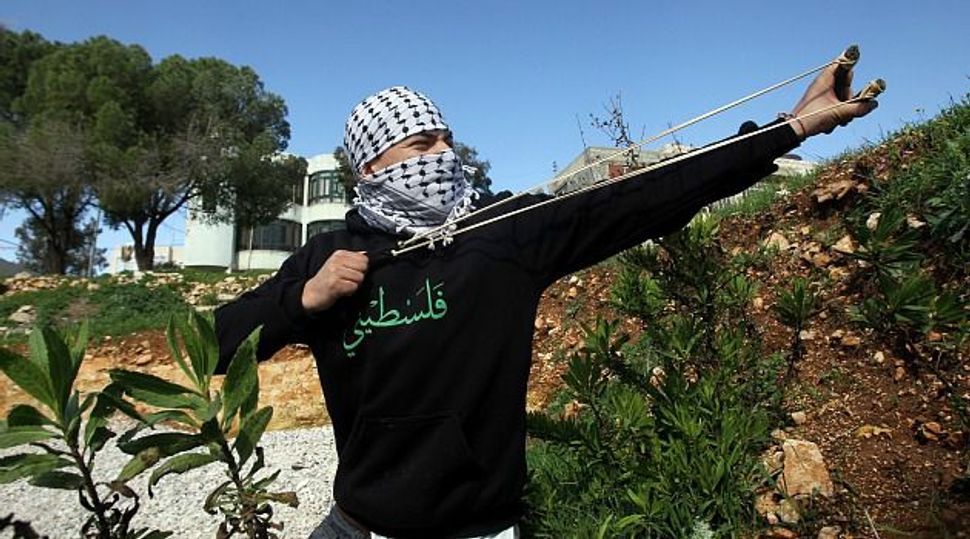 Arab-American: More than 200 Palestinian minors are in Israeli jails, many of them for throwing stones at police or Jewish settlers. One who holds American citizenship is going on trial. Image by GETTY IMAGES

A 14-year-old boy with dual U.S.-Palestinian citizenship went before an Israeli military court on Thursday accused of throwing stones at Israeli cars in the occupied West Bank.

The case has cast a spotlight on the hundreds of Palestinian minors detained by the Israeli military for stone-throwing. Human rights groups have condemned such jailings. Israel’s military says the age of detainees is irrelevant when set against the fact that mass stone-throwing can endanger life.

Mohammed Khalak, his ankles shackled together just above his running shoes, was accused along with two other youths of pelting Israeli military and settler vehicles outside the village of Silwad.

The case was quickly adjourned until next week and Khalak’s father accused the United States of not doing enough to help his son.

“The U.S. government is obligated to do something for us, but it doesn’t even care. They’ve lost the issue somewhere in their back pocket,” Abdulwahab Khalak said, adding that consular authorities had visited the boy but not promised any help.

The U.S. consulate in Jerusalem declined to comment, citing American privacy laws. A U.S. State Department spokesman in Washington on Wednesday said he was unaware of the case.

Khalak said his son, born in New Orleans, was maltreated and had his braces broken from his teeth during the course of his arrest in the early hours of April 5, in which he said heavily armed Israeli forces entered the family home.

Defense of Children International, a human rights group, says that there are 236 Palestinian minors aged 12-17 among a total 4,800 Palestinians in Israeli jails.

“The Israeli military’s treatment of Mohammed Khalak is appalling and all too common,” said Bill Van Esveld, a researcher for Human Rights Watch. “There’s no justification for … shackling him for 12 hours and interrogating him while refusing to let him see his father or a lawyer.”

The Israelis say they need to crack down on potentially lethal stone-throwing by demonstrators.

Stones thrown by Palestinians at an Israeli car outside the settlement of Ariel last month caused a car crash that left a three-year old critically injured. In 2011, Palestinian youths hit the car of American-born settler Yonatan Palmer with rocks outside Hebron, killing him and his infant son.

“These kind of events show you that throwing stones is not a game – it endangers innocent lives,” said an Israeli army spokesman. “The thrower’s age doesn’t change the fact that these objects kill, and it’s something we take seriously.”

Israel captured the West Bank in the 1967 Middle East War, and the territory is now home to some 350,000 Jewish settlers who are subject to Israeli law.

Palestinians are subject to far more strict Israeli military law, which prescribes a maximum of 20 years for throwing rocks at vehicles though offenders usually receive much shorter terms.

Palestinians complain that they face regular stone-throwing by Israeli settlers and say that Israeli troops seldom intervene, even when they witness the incidents.

Israeli troops killed two Palestinian teenagers throwing petrol bombs at them last week, and popular resentment against the military and its detention system have stoked weeks of street protests.

“Look at this oppression – a big strong army has nothing to do but harass little kids? Is this justice? Is this peace?” said Ali Hamed as he watched his 16-year old son, Imad, another youthful suspect from Silwad, in the courtroom dock.