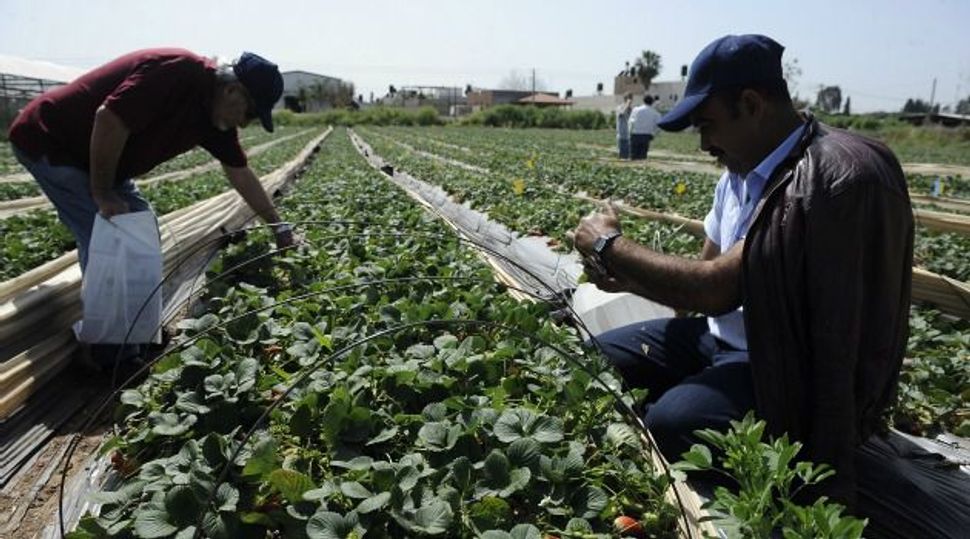 Berry Good: Gaza farmers do lucrative business selling fruits and vegetables for export to Israel and Europe ? when Israel allows them. Image by getty images

Palestinian farmers in Gaza began destroying three tonnes of herbs on Saturday, saying a prolonged closure of the crossing into Israel meant the plants were no longer fit for export to Europe.

Last October, Israel lifted a five-year ban on the lucrative export of Gazan herbs and spices, imposed after the Islamist Hamas group seized control of the coastal enclave, and farmers had hoped to cash in with their latest crop of mint and basil.

But Israel shut its sole commercial crossing into the isolated Palestinian territory last Monday in response to a rocket salvo fired out of Gaza, allowing only a brief reopening on Friday to enable the import of certain goods.

Farmers said the closure came just as they were preparing to harvest two tonnes of mint and a tonne of basil, adding that the herbs were now past their prime for the European market.

“It was too late and we regret that we have had to throw away the farmers’ harvest,” Jamal Abu Naja, director of Gaza’s communal agriculture association, told Reuters. “Repeated closures are threatening this hopeful project.”

The Palestinian economy is bound closely to Israel’s through infrastructure and has few foreign trading partners. Israel’s security cordon around Gaza and its security restrictions in the occupied West Bank limit Palestinians’ ability to compete in export markets and contribute to an unemployment rate of almost 25 percent, the World Bank said last month.

Israel and Hamas, which rejects the Jewish state’s right to exist, fought an eight-day war last November that ended with an Egyptian-brokered ceasefire.

After three months of quiet, militants fired a rocket into Israel at the end of February, with very occasional salvos following in subsequent weeks. Israel has responded each time by closing the Kerem Shalom commercial crossing.

Abu Naja urged farmers to take advantage of the decision to lift the curb last year, pointing to high demand in Europe for spices and herbs, with traders paying $26 a kilo for the Palestinian produce against $0.27 on the home market.

Some 15 tonnes of spices have been exported since January, but the latest crop was mowed down on Saturday and will be burnt after it has dried in the sun, farmers said.

“It took a month to grow this mint and if you don’t export it at the right time, you have to burn it because there is very little local consumption,” Abu Naja said.

To date, some 30 dunam (7.4 acres) have been turned over to herbs, including 20 inside the former Israeli settlement of Gush Katif, from which Israel pulled settlers and soldiers in 2005.

Some 40 Palestinian men and women who used to work in the settlements were the backbone of the current planting teams.

“We chose 40 people, including seven women, who had good experience in order to assure success. Settlers had mainly depended on planting spices when they were here,” Abu Naja said.

Unlike other produce that Israel allows to be exported to Europe, such as strawberries, cherry tomatoes and flowers, spices can be planted and exported the year round.