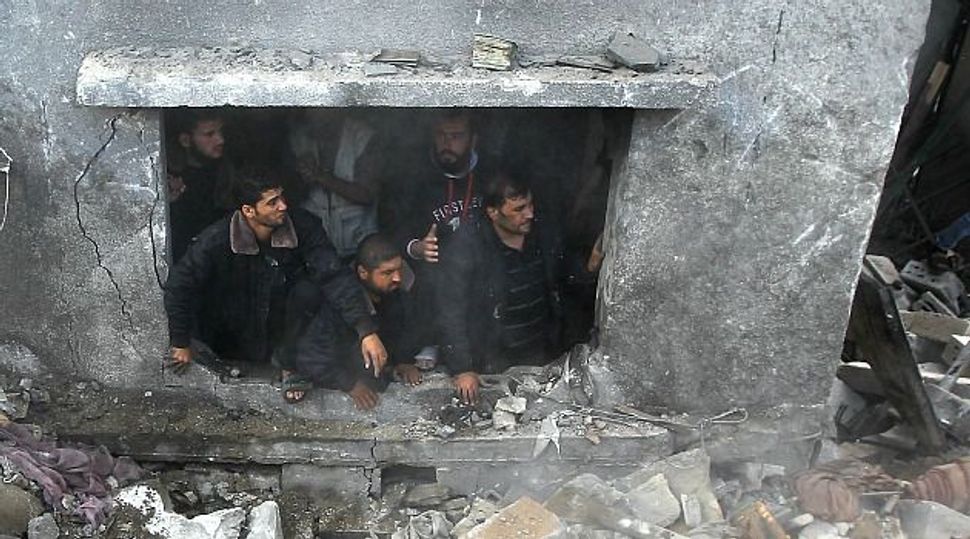 Deadly Strike: Palestinians search through rubble of Gaza building after Israeli strike that killed 12, including 10 members of one family. Image by getty images

Israel has said it will not open a criminal investigation into the death of 12 Palestinian civilians in a November air strike on a house in the Gaza Strip during its war with Hamas.

The Nov. 18 attack on the three-storey home of the Dalu family was the bloodiest of the eight days of fighting between the Jewish state and Gaza’s Islamist Hamas-led armed factions, in which around 170 Palestinians and six Israelis died.

Ten members of the Dalu family were killed, along with two neighbours. Human rights groups said the strike appeared to be unlawful.

An April 11 report by Israel’s Military Advocate General (MAG), released on Sunday, said the attack was aimed at “a senior terrorist operative and several other terrorists” responsible for launching rocket attacks at Israelis.

The report did not identify those militants, nor say whether they had been killed, but said that precautions had been taken to reduce the risk of harming uninvolved civilians and that the military did not foresee the extent of damage the attack caused.

“The unfortunate result occurred despite the efforts made to minimise the collateral damage to uninvolved civilians. As a result, the MAG decided that there was no basis to open a criminal investigation or to take any additional measures.”

New York-based Human Rights Watch (HRW) criticised the report, saying it did not provide independently-verifiable information to support its finding that the attack was lawful.

Israel launched its November assault on the Gaza Strip in what it described as a defensive effort to disrupt Palestinian rocket capabilities. Fighting ended after an Egyptian-brokered truce. The frontier has been mostly quiet since.