No Quick Answers in ‘Terror’ Bombing at Boston Marathon 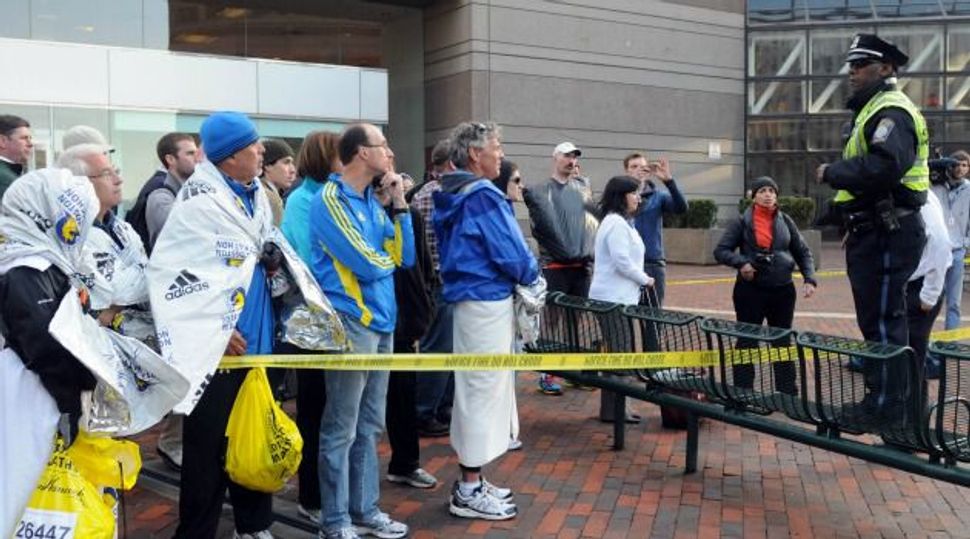 Two bombs packed with ball bearings tore through crowds near the finish of the Boston Marathon, killing three people and triggering a massive hunt for those behind an attack the White House said would be treated as “an act of terror”.

Officials said more than 100 people were wounded by the devices, which were packed with gunpowder and shrapnel to maximise injuries, according a senior law enforcement official briefed on the investigation who declined to be named.

“I saw people who looked like they had their legs blown off. There was a lot of blood over their legs. Then people were being pushed in wheelchairs,” said Joe Anderson, 33, a fisherman from Pembroke, Massachusetts, who had just run the race holding a large U.S. flag.

Some victims would require further surgery in the coming days, said Peter Fagenholz, a trauma surgeon at Massachusetts General Hospital.

“We’re seeing a lot of shrapnel injuries” from small metal debris, Fagenholz told reporters outside the hospital. Doctors treated 29 people, of whom eight were in a critical condition.

An eight-year-old boy was among the dead, the Boston Globe reported, citing two law enforcement sources briefed on the investigation. A two-year-old was being treated at Boston Children’s Hospital for a head wound, the hospital said.

White House officials and investigators said it was too early to say whether the Boston attacks were carried out by a foreign or homegrown group or to identify a motive.

The attack was the worst bombing on American soil since far-right militant and U.S. citizen Timothy McVeigh set off a massive truck bomb that destroyed the Federal Building in Oklahoma City in 1995, killing 168 people.

President Barack Obama said those responsible would “feel the full weight of justice” and the White House said it was handling the incident as “an act of terror”.

The Federal Bureau of Investigation was leading the manhunt on Tuesday, alongside battery of federal, state and local law enforcement agencies.

“It is a criminal investigation that is a potential terrorist investigation,” said Richard DesLauriers, the FBI special agent in charge for Boston.

Agents searched an apartment in the Boston suburb of Revere late on Monday, local media reported but did not elaborate.

Many runners were heading for the finish some four hours into the race when the first bomb detonated, sending up a fireball and smoke from behind cheering spectators and a row of flags representing the countries of participants.

World-class runners had long finished the race but the initial blast, followed moments later by a second, caught scores of other competitors and spectators.

The blasts put police on alert in major cities across the United States, including in Washington, D.C., and New York City, sites of the Sept. 11 attacks.

The annual Boston Marathon, held since 1897, attracts an estimated half-million spectators and some 20,000 participants every year.

Organizers in the British capital said the London Marathon would go ahead on Sunday despite the Boston attack, but security was being reviewed. [ID:nL3N0D2KSX

“Nothing can justify such an insidious attack on people who had come together for a peaceful sports event. I hope that the person or people guilty (of this attack) can be brought to justice,” she said in a statement

No Quick Answers in ‘Terror’ Bombing at Boston Marathon