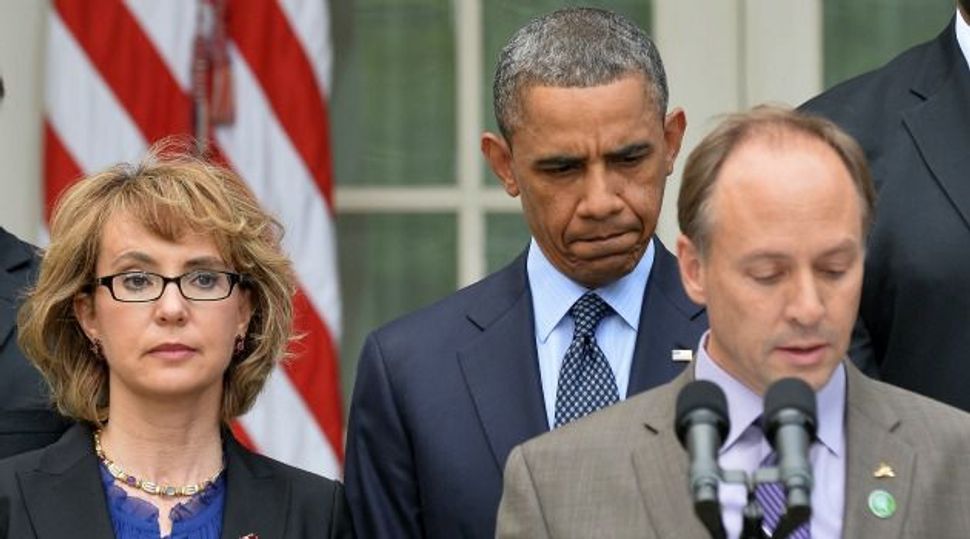 Shameful Day: Wounded ex-Rep. Gabrielle Giffords watches with President Obama as the father of a child killed in the Newtown school rampage spoke about the Senate?s killing of proposed new gun laws. Image by getty images

The U.S. senators who defeated a bill that would toughen background checks for gun purchasers “brought shame on themselves,” former congresswoman Gabrielle Giffords said.

“The senators who voted against background checks for online and gun-show sales, and those who voted against checks to screen out would-be gun buyers with mental illness, failed to do their job,” Giffords wrote in an Op-Ed appearing Thursday in The New York Times Thursday, a day after the measure earned 56 votes – four short of the necessary 60 in the 100-member chamber.

Giffords, who was shot in the head in January 2011 in an assault that took the lives of six others, had joined President Obama and the families of 20 first-graders and six adults massacred in December in Newtown, Conn., in condemning the vote.

After the Newtown massacre, Giffords, who retired in 2012 to focus on her recovery, launched a gun control group with her husband, former astronaut Mark Kelly.

“I’m furious,” she wrote. “I will not rest until we have righted the wrong these senators have done, and until we have changed our laws so we can look parents in the face and say: We are trying to keep your children safe. We cannot allow the status quo – desperately protected by the gun lobby so that they can make more money by spreading fear and misinformation – to go on.”

Giffords, who owns a gun, was scathing in her denunciation of the senators who once were her colleagues.

“Our democracy’s history is littered with names we neither remember nor celebrate – people who stood in the way of progress while protecting the powerful,” she said. “On Wednesday, a number of senators voted to join that list.”

Giffords, a conservative Democrat, was the first Jewish woman elected to federal office from Arizona.