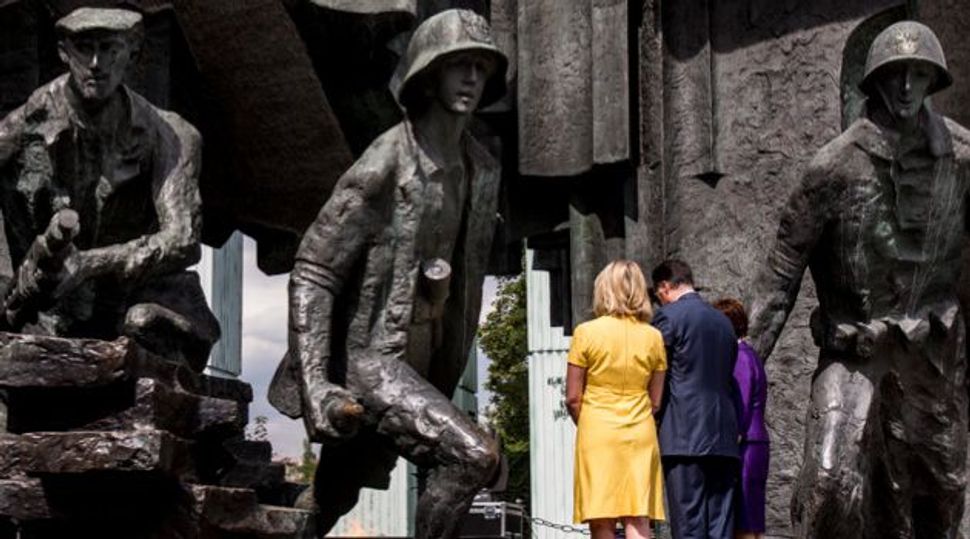 Visitors pay their respects at a memorial for the Warsaw Ghetto. Image by Getty Images

Sirens wailed in two Polish cities as the country commemorated the 70th anniversary of the outbreak of the Warsaw ghetto uprising.

The sirens in Gdansk and Warsaw Friday were part of a series of commemorative events in memory of the failed but fierce armed rebellion that Jews led in the Polish capital in 1943 against the Nazi occupation forces.

The main ceremony was held at Warsaw’s monument to the ghetto heroes and was attended by Polish President Bronislaw Komorowski, Prime Minister Donald Tusk and Israeli Education Minister Shai Piron. Chawka Folman-Raban and Simcha Rotem, who took part in the uprising, were also in attendance. In addition to the sirens, churches in Warsaw rang their bells.

“During the war Warsaw turned into a sea of ruins,” Komorowski said. “The fate of Polish Jews is seen as a special drama, terrifying with scale of atrocities.”

He added: “This uprising dates back to the battle of David and Goliath. The memory of the uprising helps to build a common Polish-Jewish and Polish-Israeli relations.”

Rotem, one of only three living insurgents, said: “People go, but the memory remains. We wanted to choose [our] kind of death. That’s all.”

Heroism, he said, belonged “to the children of the ghetto who took care of the whole family,” though they might have more easily slipped past the ghetto walls.

At the end of the ceremony, Michael Schudrich, the chief rabbi of Poland, and representatives of the Catholic, Protestant and Orthodox Churches held a joint prayer.

On Sunday, Warsaw’s main synagogue is scheduled to host a series of educational events about the uprising, in which about 200 poorly-equipped Jews fought off German troops for about four weeks.