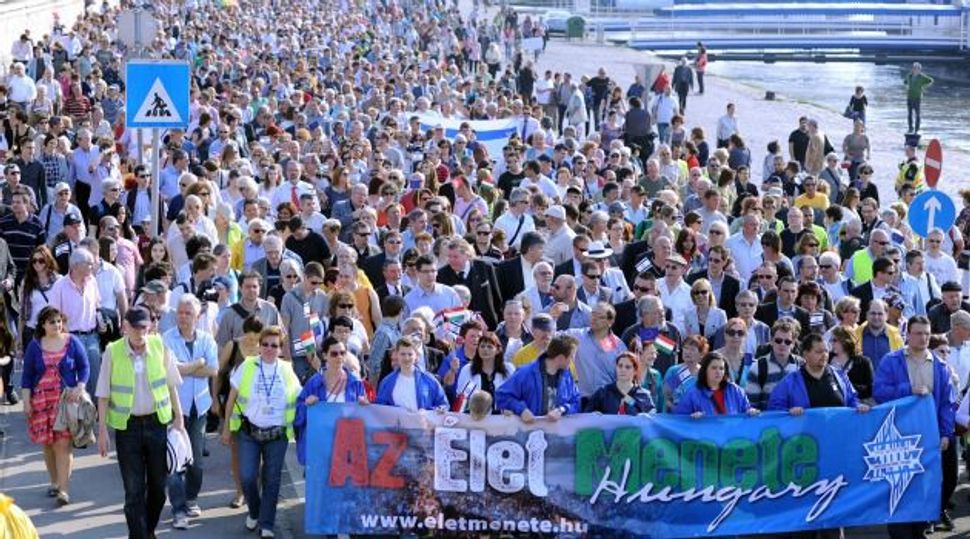 Fighting Back: Tens of thousands march in Budapest to protest rising anti-Semitism in Hungary. Image by getty images

Tens of thousands of Hungarians rallied on Sunday to protest against what they said was growing anti-Semitism in the country which will host the plenary meeting of the World Jewish Congress next month.

The annual March of the Living, which remembers the victims of the Holocaust and usually has a few thousand participants, attracted a much bigger crowd this time, with thousands walking from a square near parliament along the river Danube, carrying Izraeli and European Union flags.

“We have more people here than ever, but this means that there is big trouble,” Gabor Gordon, chief organizer of the event told the crowd. “Racism, anti-Semitism… we need to stop these while we can.”

A far-right association of motor cyclists had also planned a rally for Sunday.

But Prime Minister Viktor Orban ordered the interior minister to ban the bikers from rallying on the day when the country remembers the death of more than 500,000 Hungarian Jews in Nazi death camps in World War Two.

Orban has said no event should be allowed that could hurt the dignity of the participants of the March of the Living.