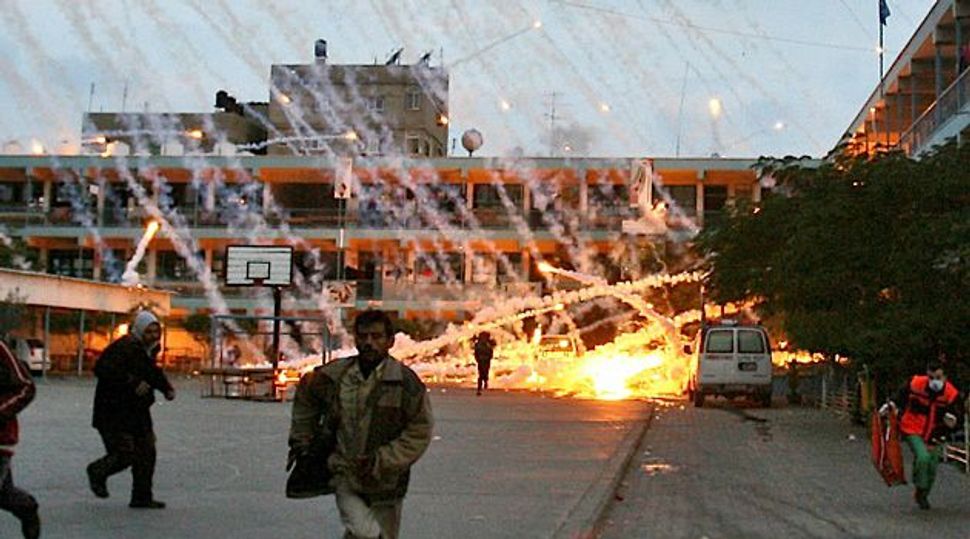 White Phosphorous rains down on a Gazan city during Operation Cast Lead. Image by Getty Images

Israel said on Friday it was phasing out white phosphorus smokescreen munitions whose use during its 2008-2009 offensive in the heavily populated Gaza Strip drew war crimes allegations.

Announcing the plan, the Israeli military did not say whether it would also review its use of weaponised white phosphorus, which is designed to incinerate enemy positions.

While legal when fired to mask troop movements on battlefields, white phosphorus smokescreens produce embers and ash that can burn – a risk in urban areas.

The New York-based watchdog group Human Rights Watch said in a 2009 report that Palestinian civilians “needlessly suffered and died” due to Israel’s use of the munitions in Gaza.

“Israel’s repeated firing of white phosphorus shells over densely populated areas of Gaza during its recent military campaign was indiscriminate and is evidence of war crimes,” the group said.

Israel said its military’s conduct in Gaza was lawful, though two senior army officers were eventually reprimanded for a strike near a U.N. compound that involved smokescreen shells.

Such shells “are to be removed from active duty soon” and replaced by Israeli-developed alternatives to white phosphorus “based completely on gas” around a year from now, the military statement said on Friday, without giving details.