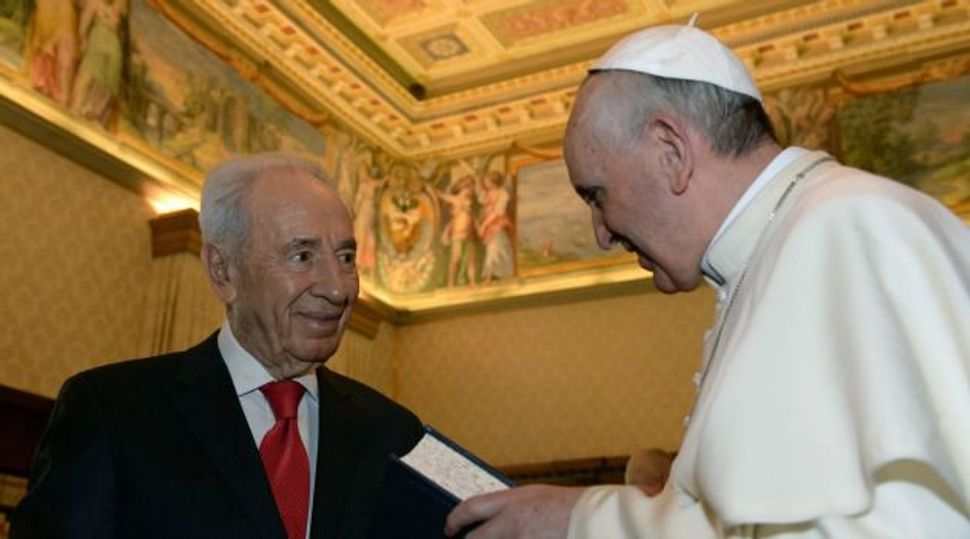 Next Time in Jerusalem: Pope Francis meets with Israeli President Shimon Peres at the Vatican.

Israeli President Shimon Peres invited Pope Francis on Tuesday to visit Israel, at his first meeting with the new pontiff who has appealed for peace in the Middle East.

The pope accepted the invitation “with willingness and joy,” a Vatican spokesman said, but there was no indication when a trip would be made.

“I am expecting you in Jerusalem, not just me but the whole country of Israel,” Peres told the pope in the presence of reporters after 30 minutes of private talks in the Vatican’s Apostolic Palace.

Francis, the former Cardinal Jorge Bergoglio of Argentina, made an appeal for peace between Israelis and Palestinians in his Easter address last month.

A Vatican statement said they discussed prospects for a resumption of negotiations for a solution that would respect “the legitimate aspirations of the two Peoples, thus decisively contributing to the peace and stability of the region”.

They also agreed on the need for a political solution to the civil war in neighbouring Syria.

Both of Francis’s two immediate predecessors, John Paul II and Benedict XVI, visited the Holy Land, including Palestinian territories, in 2000 and 2009 respectively.

Peres asked Francis “to pray for all of us” and told the pope that he would pray for him during a trip on Wednesday to the central Italian city of Assisi, where he will visit the tomb of St. Francis, whose name Bergoglio adopted when elected pope.

Francis will travel to Rio de Janeiro in July to preside at the Roman Catholic Church’s World Day of Youth, a gathering of young people from around the world. He is expected to visit his native Argentina in early 2014.