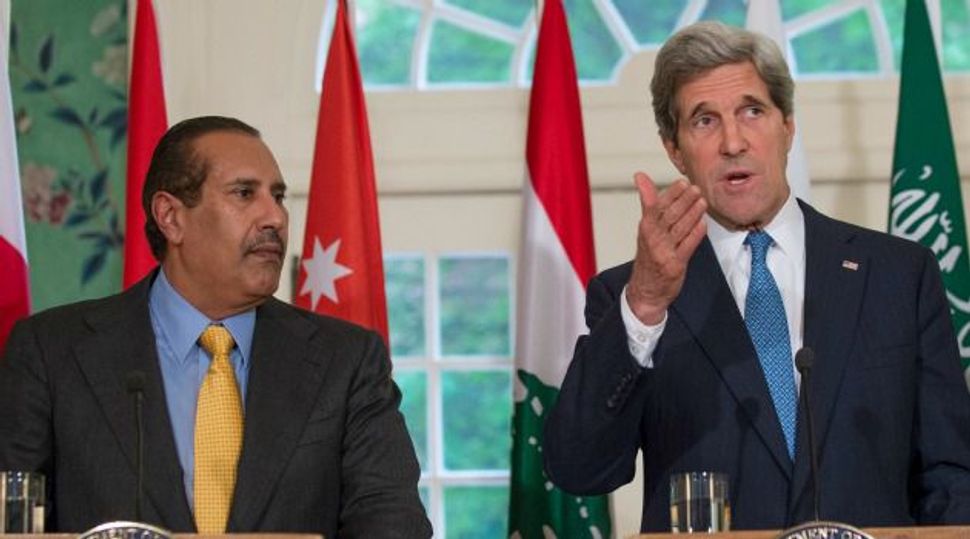 Arab states appeared to soften their 2002 peace plan on Monday when a top Qatari official said Israel and the Palestinians could trade land rather than conform exactly to their 1967 borders.

Sheikh Hamad bin Jassim al-Thani, Qatar’s prime minister and foreign minister, made the comment after he and a group of Arab officials met U.S. Secretary of State John Kerry to discuss how to promote Israeli-Palestinian peace.

Speaking on behalf of an Arab League delegation, Sheikh Hamad appeared to make a concession to Israel by explicitly raising the possibility of land swaps, although it has long been assumed that these would be part of any peace agreement.

“This news is very positive,” Israeli Justice Minister Tzipi Livni told Army Radio on Tuesday. “In the tumultuous world around … it could allow the Palestinians to enter the room and make the needed compromises and it sends a message to the Israeli public that this is not just about us and the Palestinians.”

Kerry has made no secret of his hope to revive peace talks, which broke down in 2010, but it remains unclear whether U.S. President Barack Obama will decide to back a major U.S. effort.

In convening the group, Kerry is trying to ensure that a new peace process would have the backing of the Arab states, who, if they were to offer Israel a comprehensive peace, hold a powerful card that could provide an incentive for Israeli compromises.

“The Arab League delegation affirmed that agreement should be based on the two-state solution on the basis of the 4th of June 1967 line, with the (possibility) of comparable and mutual agreed minor swap of the land,” he told reporters after the meeting at the Blair House, the U.S. president’s guest house.

The Arab League proposal offered full Arab recognition of Israel if it gave up land seized in a 1967 war and accepted a “just solution” for Palestinian refugees.

Rejected by Israel when it was originally proposed at a Beirut summit in 2002, the plan has major obstacles to overcome.

Israel objects to key points, including a return to 1967 borders, the inclusion of Arab East Jerusalem in a Palestinian state and the return of Palestinian refugees to what is now Israel.

The core issues that need to be settled in the more than six-decade dispute include borders, the fate of Palestinian refugees, the future of Jewish settlements on the West Bank and the status of Jerusalem.