Benjamin Netanyahu Says Israelis Would Vote on Any Peace Deal 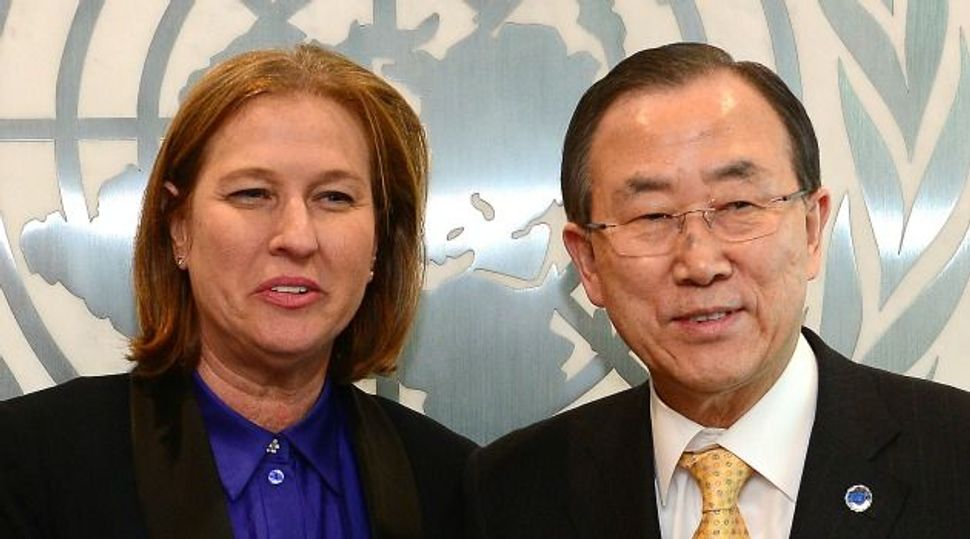 Diplomatic Push: Tzipi Livni, who is in charge of peace talks with the Palestinians, meets Ban Ki-Moon in New York amid a flurry of diplomatic activity. Image by getty images

Israeli Prime Minister Benjamin Netanyahu said on Thursday he would put any peace deal with the Palestinians to a referendum, raising expectations that direct negotiations might soon resume following a two-year stalemate.

It was the second time in just three days that Netanyahu has publicly mentioned the possibility of holding a nationwide vote on an eventual accord and came as U.S. Secretary of State John Kerry met Israeli politicians in Washington to discuss talks.

“If we get to a peace agreement with the Palestinians, I’d like to bring it to a referendum, and I’d like to talk to you about your experiences with that,” Netanyahu said as he met Swiss Foreign Minister Didier Burkhalter.

Switzerland regularly holds referendums on a broad range of issues. Israel, by contrast, has never held a referendum in its 65-year history, and previous peace treaties with Arab neighbours Egypt and Jordan were approved by parliament.

Netanyahu leads a centre-right coalition that includes supporters of the settlement movement, many of whom are fiercely opposed to the idea of allowing the Palestinians an independent state on land seized by Israel in the 1967 war.

By pledging to put any deal to a referendum, Netanyahu could be hoping to avert any immediate far-right backlash to a decision to talk land-for-peace with the Palestinians, promising that the Israeli people would have the final word.

“There is a very serious effort under way to get talks to resume,” said a senior Israeli official who declined to be named. “People are devoting a lot of time and effort to this. It is possible and it is doable.”

U.S. President Barack Obama came to Israel in March and his secretary of state has visited the region three times in little over six weeks.

In a sign of continued diplomacy, Kerry met Israeli Justice Minister Tzipi Livni later on Thursday in Washington and U.N. Secretary-General Ban Ki-moon at the United Nations in New York.

Livni has been designated by Netanyahu to be his chief peace negotiator. She was traveling with one of the prime minister’s top officials and confidants, Yitzhak Molcho.

The State Department offered no detail on Kerry’s talks with Livni, describing them as part of his “ongoing discussions … to explore possible ways forward to resolve this conflict.”

Direct peace talks between Israel and the Palestinians broke down in 2010 over the issue of continued Jewish settlement building on occupied land. Palestinian President Mahmoud Abbas says he will not return to the table until there is a construction freeze. Israel says there should be no pre-conditions.

Unexpectedly highlighting the issue of referendum has fueled hopes that the impasse might soon be overcome. However, there was little sign that the core questions dividing the two sides, including the status of Jerusalem, were any nearer resolution.

The one bright spot, in the view of U.S. officials, was this week’s acknowledgment by the Arab League that their 2002 peace plan may be modified to allow the two sides to trade land rather than conform exactly to their 1967 borders.

“Basically what they say is that the Arab peace initiative is not something which is take-it-or-leave-it but it is negotiable,” Livni told reporters after meeting Ban in New York. “This is … a good message.”

The 2002 proposal offered full Arab recognition of Israel if it gave up land seized in 1967 and accepted a “just solution” for Palestinian refugees.

The Palestinians have said that they would hold a referendum on any eventual accord, with no guarantees that their diverse electorate, including the far-flung refugee population, would accept the likely compromises needed to seal a deal.

Israel passed a law in 2010 for a referendum to approve any handover of East Jerusalem or the Golan Heights, territory which it captured in the 1967 war and has annexed.

Moves are under way in parliament to expand that law to include the West Bank, which has not been annexed and is under Israeli military occupation.

Benjamin Netanyahu Says Israelis Would Vote on Any Peace Deal