Taking Sides in Syria War Is Tough Choice for Israel 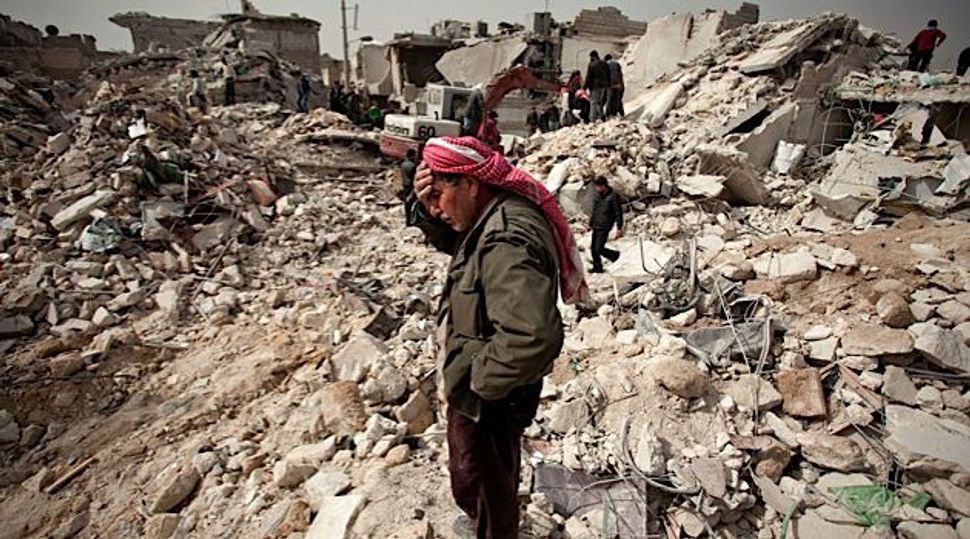 The dilemma Israel faces in trying to formulate a strategy on Syria two years into its civil war is symbolised by a case being heard in a small courtroom near Tel Aviv.

The state is prosecuting an Arab Israeli who briefly joined the rebel forces fighting to topple President Bashar al-Assad.

Arrested after his return to Israel, Hikmat Massarwa, a 29-year-old baker, is accused of unlawful military training, having contacts with foreign agents and traveling to a hostile state.

The trial hinges on the unanswered question of who, if anyone, Israel favours in the war and if the rebels will turn out to be friends or enemies.

The prosecutor in Lod is trying to depict Massarwa as having aligned himself with foes of Israel, but Judge Avraham Yaakov is struggling for clarity. “There’s no legal guidance regarding the rebel groups fighting in Syria,” he told a recent hearing.

Matters were simpler during the decades of unchallenged Assad family rule.

Technically Israeli is at war with its northern neighbour. It captured the Golan Heights in the 1967 Middle East War, built settlements and annexed the land. But belligerence was rare and the borderland has remained largely quiet for decades.

Assad’s Syria is part of the so-called Axis of Resistance along with Iran and Lebanon’s Hezbollah, both arch enemies of the Jewish state. But Syria itself avoided open conflict.

Israel was slow to welcome the uprising against Assad when it broke out in March 2011. Though some leaders now call for his overthrow, planners fret about what might follow.

“The question for us is no longer whether it is good or not if Assad stays in power, but how do we control our interests in this divided, murky situation which could last for decades,” said Ofer Shelah of the Yesh Atid party, which is part of the government coalition.

The dilemma has grown more acute since Islamist fighters linked to al-Qaeda assumed a prominent role in the rebels’ battle plans.

Israelis believe one in 10 of the rebels is a jihadi who might turn his gun on them once Assad is gone. They also worry that Hezbollah guerrillas allied to Assad could get hold of his chemical arsenal and other advanced weaponry.

So Israel has acted with restraint on Syria – shooting at its troops across the occupied Golan Heights only when hit by stray fire and playing down an Israeli airstrike on a suspected Hezbollah-bound convoy in January.

Officials say Israel has also been cool to Western proposals to increase aid to the Syrian rebels to help them match Assad’s superior armed forces.

One Israeli official told Reuters that he responds to any suggestions of a foreign military role with the question: “Do you really know on whose behalf you’ll be intervening?”

But with Prime Minister Benjamin Netanyahu presiding over a new, right-leaning coalition and the Israeli military stretched by keeping vigil over several fronts – including Islamist-ruled Egypt – the message has been far from uniform.

Netanyahu may have contributed to this by framing Iran and its nuclear programme as Israel’s overriding regional concern, bolstering the case for removing Tehran’s ally Assad.

When an Israeli intelligence analyst said last week that Assad’s forces had used chemical weapons, both the Netanyahu government and its foreign allies were blindsided, according to officials.

Washington confirmed the Israeli assessment, thus posing a problem for U.S. President Barack Obama, who had said use of chemical arms would be a “red line”.

Israel’s ambassador to Washington, Michael Oren, said it was not making any policy recommendations to Obama on Syria.

“We think this issue is very complex,” he told Reuters.

Several officials said Israel would be unlikely to attack Syria unilaterally unless it had evidence that chemical weapons had been handed over to Hezbollah.

Lacking enough of the specialised ground troops that would be needed for a search-and-destroy sweep of chemical weapons, Israel would probably have to rely on aerial bombing.

The Netanyhau government might even acquiesce if the rebels acquire the chemical weapons, on the assumption that the insurgents were mainstream Syrians keen to rebuild their country and loath to invite catastrophic war with Israel.

“If the jihadis get the chemical weapons, that’s very bad, but there’s still the hope that these people lack the hard-core military wherewithal, and required technical support in Syria, that would be required to use them,” one Israeli official said.

Indeed, Israeli planners are debating to what extent the radical Sunni Islamists fighting Assad could eventually constitute a direct threat to Israel.

The chief military spokesman, Brigadier-General Yoav Mordechai, sounded the alarm last month by saying the “Global Jihad” – meaning al Qaeda and its affiliates – wielded the most clout on the Syrian-held side of the Golan Heights.

Other Israeli authorities are more optimistic. The Mossad intelligence agency estimates that Syria’s entrenched secularism will dilute enmity to Israel, according to one official.

“The Islamists there aren’t all Salafists, and the Salafists aren’t all al Qaeda, by any means,” the official said.

“We may not make peace, but I think we might find some kind of dialogue, if only for the sake of mutual deterrence.”

Israel has given no indication that it already has contacts with Syria’s opposition. But it has coordinated closely on security with Jordan, a supporter of some rebel factions.

Back in Judge Yaakov’s courtroom, the fate of Massarwa, who faces a maximum of 15 years in jail if convicted, rests on whether the state can prove there is danger to Israel from the Free Syrian Army unit he stayed with for a week in March.

Massarwa’s lawyer, Helal Jaber, hopes the logic of “my enemy’s enemy is my friend” will win clemency for his client, who went to Syria via Turkey in search of a missing brother who had separately joined the rebels.

“The greatest democracies in the world, including the United States, are supporting the opposition to Assad,” Jaber said. “So how can Israel fault someone for doing the same?”

Taking Sides in Syria War Is Tough Choice for Israel