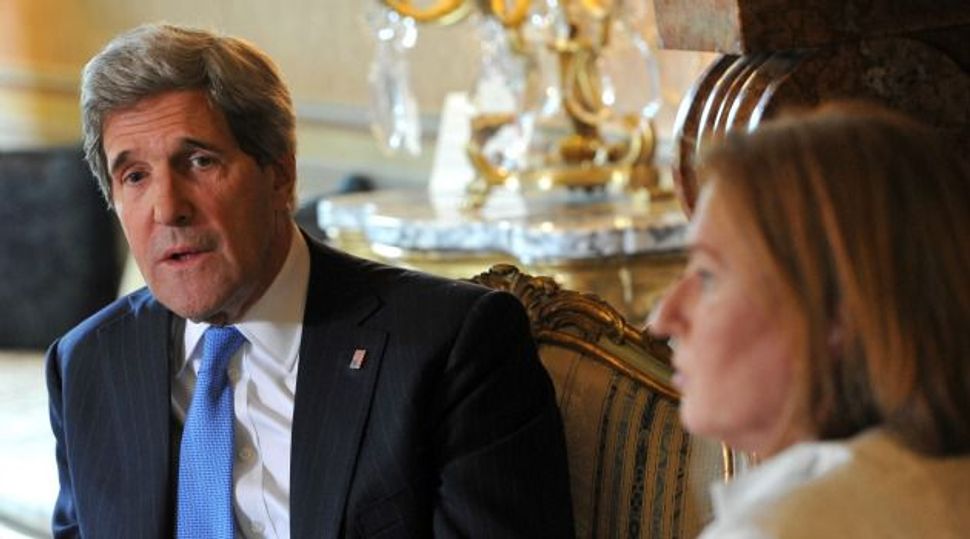 Secretary of State John Kerry suggested on Wednesday that Washington was trying to revive Israeli-Palestinian peace talks within a short time frame as he announced his fourth visit to the region this year.

Kerry will meet Israeli Prime Minister Benjamin Netanyahu and Palestinian President Mahmoud Abbas on May 21 or 22, he said after talks in Rome with Israeli Justice Minister Tzipi Livni, who is overseeing the Israeli effort to relaunch negotiations.

Kerry, who has been holding talks with Israeli, Palestinian and other Arab officials, is expected to meet Netanyahu and Abbas separately.

“I think it is fair to say that we are working through threshold questions and we are doing it with a seriousness of purpose that I think Minister Livni would agree with me has not been present in a while,” Kerry told reporters.

“We all believe that we are working with a short time span. We understand the imperative to try to have some sense of direction as rapidly as we can.”

Israeli-Palestinian peace talks collapsed in late 2010 in a dispute over continued Israeli building of Jewish settlements on West Bank land that the Palestinians want for a state.

It remains unclear, however, whether the two sides are ready to make a serious new peace effort, or how much muscle U.S. President Barack Obama is ready to put behind a new initiative.

The main issues to be addressed in a peace agreement include borders, the future of Jewish settlements, the status of Jerusalem and fate of Palestinian refugees.

In addition to his talks with Israelis and Palestinians, Kerry has worked to line up Arab backing, both to support Abbas in any concessions he might ultimately have to make and to offer Israel the possibility of peace with the wider Arab world.

Kerry scored a diplomatic victory last week when the Arab League acknowledged that Israelis and Palestinians may have to swap land in any peace deal.

Arab states appeared to soften their 2002 peace plan on April 29 when Sheikh Hamad bin Jassim al-Thani, Qatar’s prime minister and foreign minister, said the two sides could trade land rather than conform exactly to their 1967 borders.

His comment, made on behalf of an Arab League delegation, amounted to a concession to Israel. While it has been assumed for at least a decade that land swaps would be part of any peace deal, the Arab League had never explicitly embraced the idea.

Livni said she hoped Arab states would be behind Abbas in eventual negotiations, providing “an understanding, which is very important for us, that peace with the Palestinians means also peace with the Arab world”.