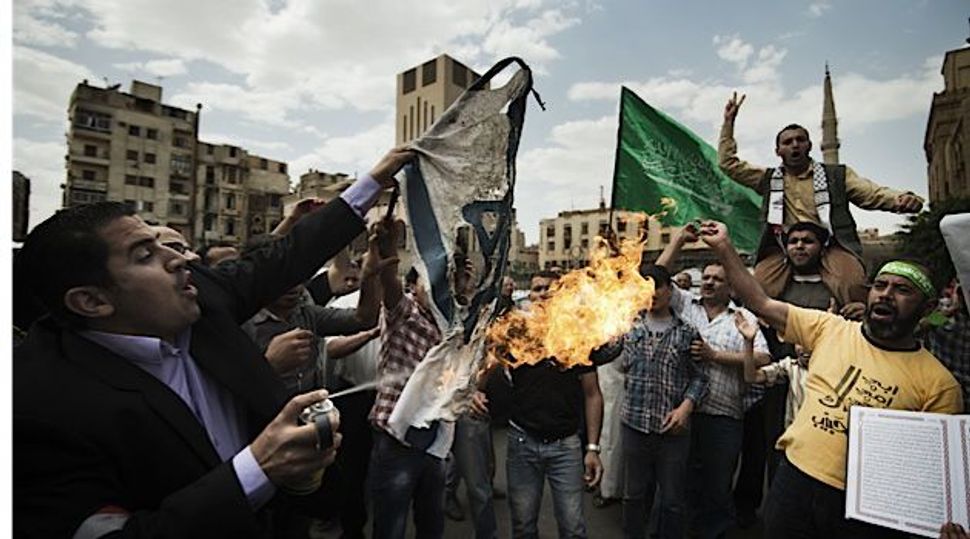 Calls for Israel’s destruction were heard in Cairo at the first anti-Israel rally organized by the Muslim Brotherhood since the movement’s candidate was elected president.

Several hundred participated in the demonstration Friday, chanting “the people want destruction of Israel,” the Associated Press reported. The rally was to protest Israeli airstrikes in Syria and the detention of a Muslim cleric.

The rally near Al-Azhar mosque – the centuries-old seat of Sunni Muslim learning – is the first such protest by the Brotherhood since it came to power after the 2011 uprising that ousted president Hosni Mubarak.

Group officials say they are protesting the Israeli detention of a top Palestinian Muslim cleric in Jerusalem in a rare crackdown that drew fierce condemnation from Palestinians.

The demonstrators were also denouncing Israeli airstrikes in Syria that targeted alleged shipments of advanced Iranian missiles thought to be bound for Hezbollah.

The decision was taken in response to a 24-hour restriction imposed by Israel on Wednesday on Palestinian access to the Temple Mount. The restriction was put in place due to the celebration of Jerusalem Day, which marks the anniversary of the city’s reunification in 1967.

The day before, Palestinian worshipers at the Al-Aksa Mosque on the Temple Mount threw chairs and rocks at Jewish visitors to the site, which also is holy to Jews. Jews are allowed to visit there but are prohibited from praying.