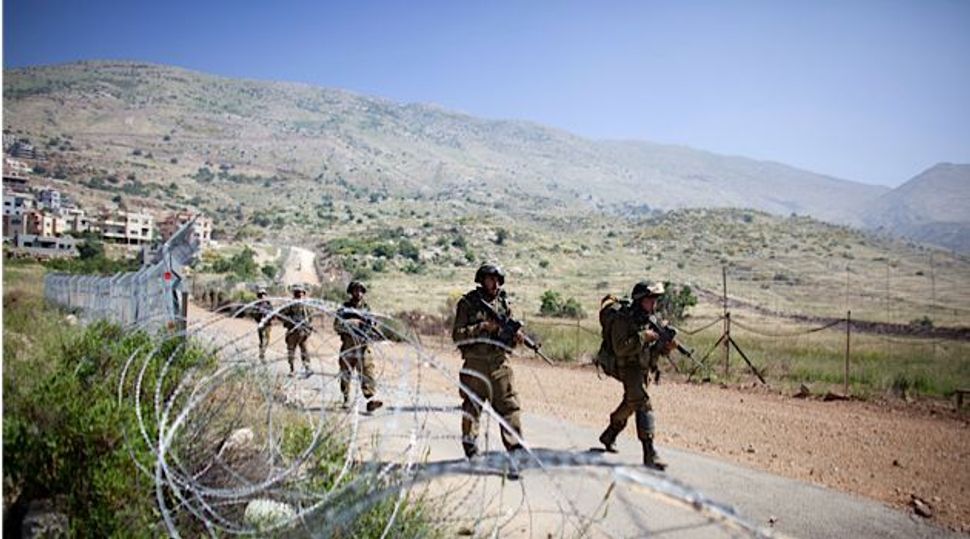 Threats from Damascus and its Lebanese ally Hezbollah to turn the Golan Heights into a “resistance front” against Israel could end nearly four decades of calm across the increasingly tense ceasefire line separating Israeli and Syrian forces.

President Bashar al-Assad, and his father before him, kept the front line between Syria and the Israeli-occupied Golan quiet despite an official state of war between the two countries and Syria’s support for militants in Lebanon and Gaza.

But following Israel’s weekend air raids near Damascus, Assad was quoted as saying he would turn the Golan into a “resistance front” – suggesting he had given a green light to guerrilla groups to launch retaliatory attacks.

Assad’s ally Hassan Nasrallah, head of the powerful Lebanese militia Hezbollah, followed with a promise to support his efforts “to liberate the Syrian Golan”.

“When Assad said this, Israeli officials mocked,” Israeli military affairs analyst wrote in Israel’s Yedioth Ahronoth newspaper. “But when Assad and Nasrallah voice the exact same threat, it should be taken seriously”.

“Hezbollah could begin to find a foothold on the Israeli-Syrian border which, in the absence of a central government in Damascus, is becoming chaotic.”

Hezbollah fought a 34-day war with Israel in 2006, firing thousands of rockets into northern Israel.

Nasrallah said that in response to the Israeli air raid, which intelligence sources said targeted weapons destined for his fighters, Syria would supply Hezbollah with more sophisticated weaponry.

“If the Israeli enemy thinks it can destroy Syria, let me tell you that Syria and Hezbollah can destroy Israel,” Syrian parliamentarian Sharif Shehada told Hezbollah’s Manar television. “When President Assad says Syria has become a nation of resistance, he is certain of what he is saying”.

As well as Hezbollah, Assad could still depend on some loyal Palestinian factions based in Syria to stage attacks on Israel.

A group calling itself the Free Palestine Movement said on Friday its fighters attacked an Israeli observation post in the Golan. Israel’s military said it was unaware of any incident.

The Syrian side of the frontier has already become a battle ground between Assad’s forces and rebels seeking his overthrow, with fighting breaking out even within the narrow, U.N.-monitored separation zone between Syria and the Golan.

Rami Abdelrahman, head of the Britain-based Syrian Observatory for Human Rights, said rebels had been conducting hit-and-run attacks on Assad’s forces near the Golan frontline.

In some areas, particularly along the southern stretch of the 50 mile (80 km) frontier, Assad’s forces have pulled back from their positions, although rebels are unable to assert control because of the army’s superior firepower, he said.

“It’s increasingly shaky,” said a Western diplomat in Beirut who is monitoring developments in the Golan area.

The growing strength of jihadi fighters among rebel ranks is already posing a headache for Israel, which worries that al Qaeda fighters are for the first time winning territory close to its northern frontier.

In the latest blow to stability in the Golan, Syrian rebel fighters seized four Filipino observers this week, the second abduction of U.N. personnel in two months.

The Philippines said in response it aims to withdraw its 342 soldiers, casting further doubt on the future of the 1,000-strong UNDOF force patrolling the sliver of territory which has formed a barrier between the two foes since 1974.

Japan and Croatia have already withdrawn troops and diplomats say Austria, the largest remaining troop contributor, is reluctant to stay if the European Union eases a ban on arms sales to rebels because it would make the EU part of the conflict.

“Imagine the situation where the only neutral party in the area is removed – it would be a free-for-all, it could be very very dangerous,” said Timor Goksel, who served with U.N. peacekeepers in southern Lebanon for 24 years.

“Even with its limited abilities, UNDOF is an important stability agent in the region.”

On the Golan Heights itself, occupied by Israel in the 1967 Middle East War and annexed 14 years later in a move not recognised internationally, Israeli security officials see little threat from the local Druze population who live alongside Israeli settlers.

Salman Sahar-Deen, a Golan Druze, was dismissive of Nasrallah’s threat.

“An absolute majority of the Druze oppose Israeli occupation. But they are split on supporting Syria,” he said.

“What Nasrallah is proposing does not suit our capabilities nor our doctrine. There is always the chance of small groups taking action, but that would be very local.”

For now, Assad’s priority is to crush the two-year-old uprising against his rule. Hezbollah too is focused on supporting its ally in Damascus and would be wary of launching an offensive which leaves Lebanon open to devastating Israeli retaliation.

Goksel said the he did not believe Assad or Hezbollah planned major military operations into the Golan, but the security vacuum on the Syrian side left room for others to act.

“What I’m afraid of, given the fact that no one is really in charge there, is that any group affiliated to Damascus can take matters into its own hands,” he said.

“It happened in Lebanon. When we used to have problems in Palestine someone in the south (of Lebanon) would go and launch a couple of rockets into Israel”