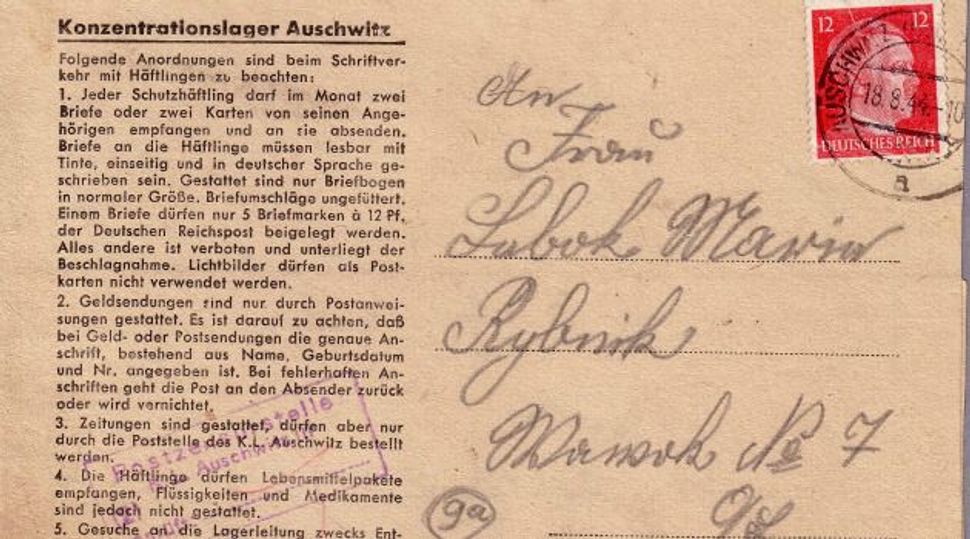 Haunting: A longlost postcard has been uncovered near the site of Auschwitz death camp. Unlike postcards like this one, it was sent before the Nazi Holocaust turned the town into a metaphor for evil. Image by wikimedia commons

Construction workers near the sole surviving synagogue in Oswiecim, Poland have turned up a postcard that sheds light on pre-war Jewish life in the town.

Oswiecim is the Polish town where the Nazi death camp Auschwitz was built. It had a majority Jewish population before World War II.

A lawyer in Paris named Georges Lewinsky sent the postcard on July 17, 1935 to a Jewish client in Oswiecim named Mendel Hoenig, apparently to confirm a business deal.

The postcard, stained and crumpled, came to light this week during construction work to shore up a retaining wall of the Chevra Lomdei Mishnayot synagogue.

The synagogue, long used as a carpet warehouse, was restored and reconsecrated in 2000 to form part of the Auschwitz Jewish Center, a museum, synagogue and education center that highlights the richness of even everyday Jewish life destroyed in the Shoah.

“Dear Sir,” he wrote to Hoenig, “I received your letter of July 12 and immediately I got in touch with Mr. Huault to whom I presented your offer. Mr. Huault will send you directly the order and the advance payment. The cost of my intermediary services would be 16 francs. With best regards.”

Other finds during construction include pages from a Yiddish language Haggadah.