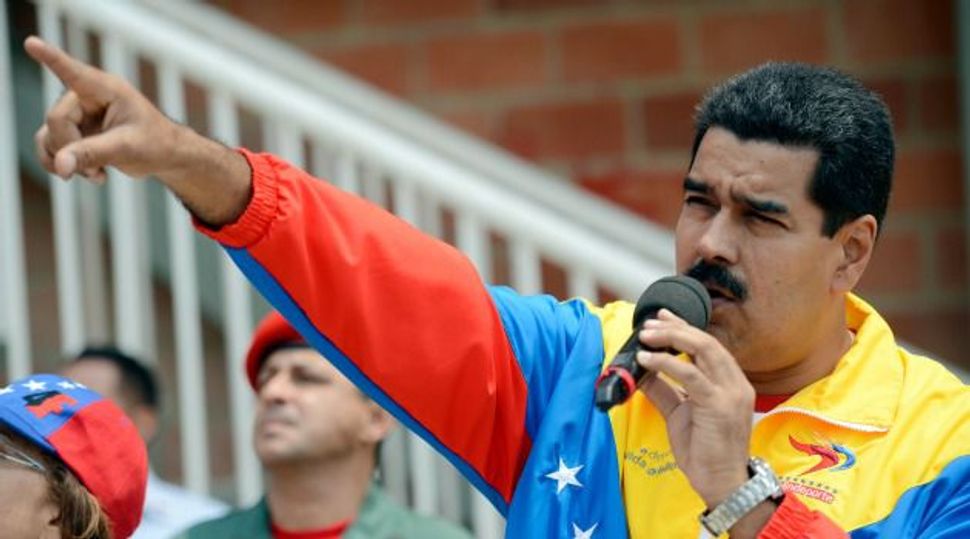 I?m Jewish: Nicholas Maduro has been accused of anti-Semitism, along with his mentor, Hugo Chavez. The new Venezuela president counters by claiming Jewish heritage. Image by getty images

Venezuelan President Nicholas Maduro, denying that his government has an anti-Semitic bent, said his grandparents were of Sephardic Jewish descent.

“My grandparents were Jewish, so many of the Maduros, same as the Moors [Muslims], converted to Catholicism in Venezuela,” Maduro told Apporea, a pro-government media outlet, last week. “The mother of the Minister of Communication and Information Ernesto Villegas is of the same tradition.”

During the interview, Maduro rejected allegations he attributed to Claudio Epelman, executive director of the Latin American Jewish Congress, that his government was anti-Semitic.

“I deeply lament the declarations of Claudio Epelman, director of the Latin American Jewish Congress, who I know and have met with in Venezuela many times, saying that there is anti-Semitism in Venezuela and accusing Chavez and me … if he wants he can accuse me, but he should leave Chavez alone.”

Jews have been leaving Venezuela since Chavez came to power due to a combination of the dramatic rise in violent crime, economic instability and a series of police raids and attacks on Jewish institutions. The Jewish community now numbers about 9,000 people, down from 22,000 in 1999.

During the interview, Maduro condemned the Israeli air strikes against Syria last week and its “aggression” against Iran, but he said he differentiated between Israel and the Jewish people.

“We reject the campaign [against us],” said Maduro. “We are a humanitarian people. We are not anti-Semites.”