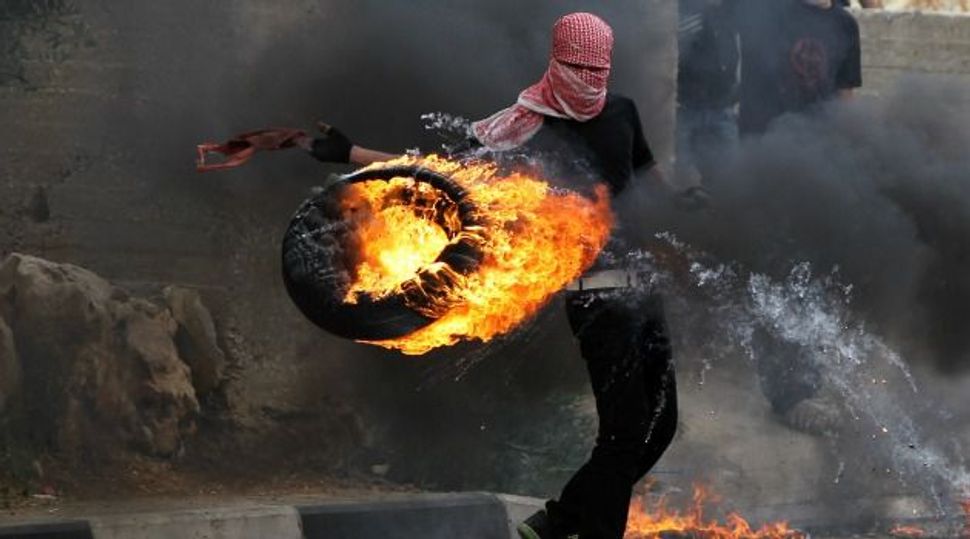 Palestinians clashed with Israeli forces in the occupied West Bank on Wednesday during demonstrations to mark 65 years since what they call the Nakba (Catastrophe) when Israel’s creation caused many to lose their homes and become refugees.

U.S. Secretary of State John Kerry is to return to the region on Tuesday in another bid to revive peace talks frozen since 2010.

But a resolution remains elusive and many Palestinians cling to a desire for refugees and descendants to return to ancestral lands now in Israel – an idea Israel rejects, saying it would spell the end of the Jewish state.

Protesters skirmished with Israeli forces outside a refugee camp near the West Bank city of Hebron and at a prison near Ramallah, leaving several Palestinians injured.

Thousands also rallied in the main square of Ramallah, the Palestinians’ de facto capital while Jerusalem remains under Israeli control, holding up placards with the names of villages depopulated in 1948 and old keys, symbols of lost homes.

“For the sake of my future and to return to my family’s land, I don’t want any more useless negotiations but the path of resistance and the rifle,” said Ahmed al-Bedu, a gangly 15-year-old Palestinian who holds Jordanian citizenship.

Local Arabs and the armies of neighbouring Arab states failed in a 1948 war to stop the Jews settling in Palestine, who cited biblical ties to the land and a need for a Jewish state, which up to that time was under British colonial control.

Many Arab residents fled or were expelled by force from their homes and prevented from returning. Only Jordan, which now has a peace treaty with Israel, gave the refugees citizenship.

According to official Palestinian figures published this week, 5.3 million Palestinians – almost half of their total number in the world – are registered by the United Nations as refugees in Syria, Lebanon, Jordan, the West Bank and Gaza.

Many of them live in the concrete warrens of overcrowded camps, with poor access to employment and basic services.

Mahmoud Abbas, president of the Western-backed Palestinian Authority and himself a refugee from a town now in northern Israel, stoked Palestinian outrage last year by telling an Israeli news channel he did not seek to return home.

Saeb Erekat, Abbas’s top negotiator with Israel, said on Wednesday that sectarian conflicts in Syria and Iraq endangered Palestinians there and that Israel’s “refusal to assume responsibility for the refugee question” and to agree on a “just solution” for them was harming prospects for peace.

The Palestinian Authority seeks an independent state in the West Bank and Gaza Strip with East Jerusalem as its capital – all lands captured by Israel in the 1967 Middle East war. Israel deems Jerusalem its “eternal and indivisible” capital.

Hamas, the Islamist movement that rules Gaza, refuses to recognize Israel or renounce violence against it, saying a refugee return can be attained only through force.

“Any initiatives and solutions that do not secure the return of our full rights will be rejected by our people. Our holy land is not for sale or bargain,” the group said in a statement.

“Resistance by all its forms, and foremost armed resistance, will remain our way to extract our rights.”