Israel Plans to ‘Legalize’ 4 Illegal Settlements in Snub of Peace 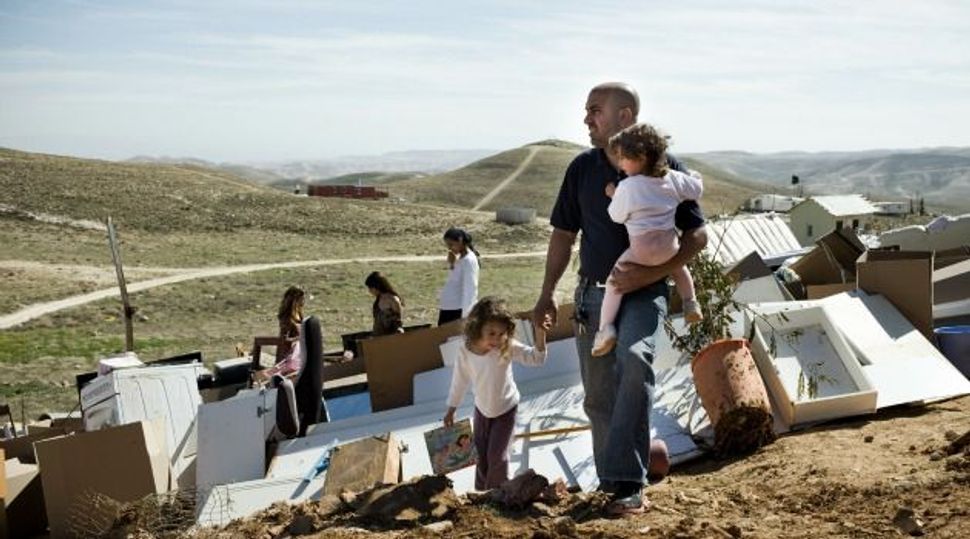 Forced Out: Jewish settlers in illegal outpost watch after home was destroyed by Israeli authorities. Image by getty images

Israel has been sending mixed signals on its internationally condemned settlement policy as Kerry pursues efforts to revive negotiations Palestinians quit in 2010 in anger over Israeli settlement building on occupied land they seek for a state.

In a reply to a Supreme Court petition by the Israeli anti-settlement group Peace Now, the government said it had taken steps in recent weeks to authorise retroactively four West Bank outposts built without official permission.

“The intention to legalise outposts as new settlements is no less than a slap in the face of Secretary Kerry’s new process and is blatant reassurance to settler interests,” Peace Now said in a statement.

A spokesman for Prime Minister Benjamin Netanyahu declined to comment on the government’s response to the court.

Most the world deems all Israeli settlements in the West Bank, which Israel captured in the 1967 Middle East war, as illegal. Israel disputes this and distinguishes between about 120 government-authorised settlements and dozens of outposts built by settlers without permission.

But Peace Now said at the time construction already under way was continuing, and Israel announced last week that it had given preliminary approval for 300 new homes in Beit El settlement as part of a plan Netanyahu announced a year ago.

Kerry, due to meet Netanyahu and Palestinian President Mahmoud Abbas separately next week, has said he believes “the parties are serious” about finding a way back into talks.

The main issues that would have to be resolved in a peace agreement include the borders between Israel and a Palestinian sate, the future of Jewish settlements, the fate of Palestinian refugees and the status of Jerusalem.

Some 500,000 Israelis have settled in the West Bank and East Jerusalem, which was also captured from Jordan in 1967. About 2.7 million Palestinians live in those areas.

Israel Plans to ‘Legalize’ 4 Illegal Settlements in Snub of Peace