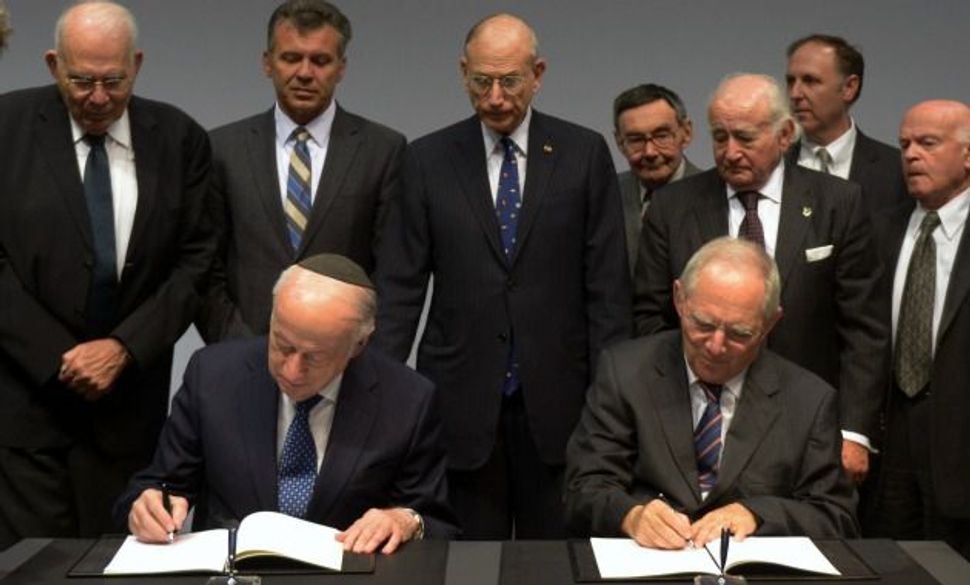 Amid calls that the Claims Conference bungled a warning in 2001 about fraud within the organization, conference leaders appointed a committee to “formulate an appropriate course of action.”

The move, announced by board chairman Julius Berman in an email to board members on Sunday, followed an announcement by the World Jewish Congress that it was setting up its own task force to look into allegations of a cover-up by the Claims Conference.

The allegations concern the Forward’s revelation that an anonymous letter sent to the Claims Conference’s Frankfurt office in 2001 that identified five cases in which restitution was approved for ineligible claimants.

The letter reached the organization’s then-director in Germany, Karl Brozik, who queried Semen Domnitser, the official in New York who approved the cases and who was found guilty two weeks ago of spearheading the $57 million fraud scheme that run unimpeded at the Claims Conference from 1993 to 2009. In his 2001 response to Brozik, Domnitser acknowledged that the cases had been wrongfully approved but led officials to believe that any errors were inadvertent. The fraud scheme continued to run for nearly a decade more.

The Forward later revealed that current Claims Conference officials sought to shift the blame to Brozik, who has since died.

Among those who were CC’d on Domnitser’s response to Brozik was the former chief of the conference, Saul Kagan, it’s then-chief, Gideon Taylor, and its current chief, Greg Schneider, whose formal title is executive vice president.

In recent days, critics have accused the Claims Conference of orchestrating a cover-up of the episode. But Schneider’s office denies the accusations, noting that it was the Claims Conference itself — by way of Schneider — that shared the letter with the FBI and called attention to it during Domnitser’s trial to demonstrate how Domnitser systematically lied to his superiors.

Though Schneider was CC’d on Domnitser’s response to Brozik, a Claims Conference spokeswoman said Schneider did not see the original anonymous 2001 letter and at the time was not the person who would have handled the matter, because several people senior to him were involved. Ultimately, it was Brozik who elected not to inquire further into the irregularities, the Claims Conference said. Brozik is now deceased.

“I have asked our Chairman of the Executive, Amb. Reuven Merhav, to head a Select Leadership Committee of the board to formulate an appropriate course of action for the Conference with respect to the issues surrounding the 2001 letter,” Berman wrote in his email Sunday. “I look forward to its deliberations and recommendation.”

The $57 million fraud scheme discovered in 2009 involved falsifying applications to the Hardship Fund, an account established by the German government to provide one-time payments of approximately $3,360 to those who fled the Nazis as they moved east through Germany, and the Article 2 Fund, through which the German government gives pension payments of approximately $411 per month to needy Nazi victims who spent significant time in a concentration camp, in a Jewish ghetto in hiding or living under a false identity to avoid the Nazis.

In all, 31 people were arrested in connection with the scheme. Twenty-eight pleaded guilty and the three who went to trial were found guilty this month in federal court in Manhattan.