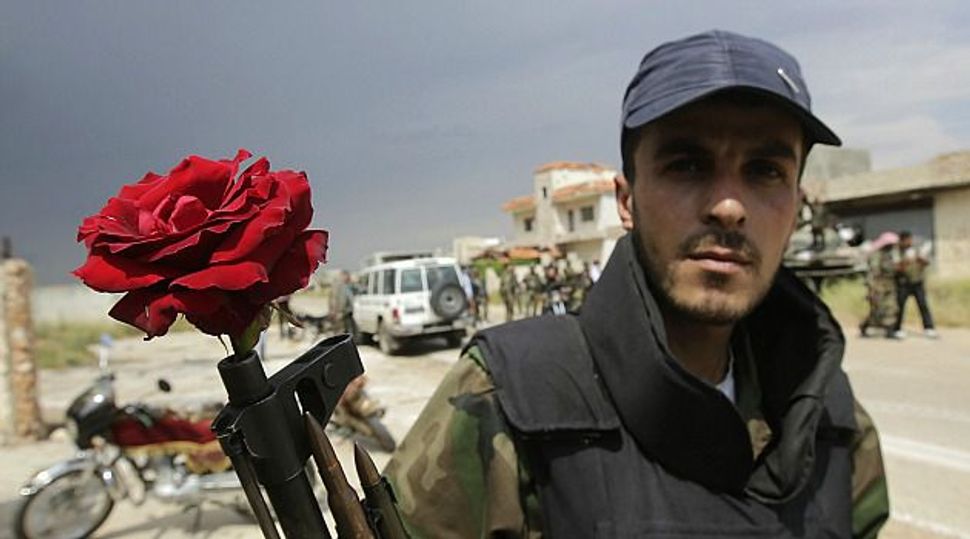 No Peace: Syrian rebel fighter prepares for battle with government forces and their Hezbollah allies. Image by getty images

About 30 Lebanese Hezbollah fighters and 20 Syrian soldiers and militiamen loyal to President Bashar al-Assad have been killed in the fiercest fighting this year in the rebel stronghold of Qusair, Syrian activists said on Monday.

If confirmed, the Hezbollah toll from Sunday’s battles in Qusair near the Lebanese border would highlight a deepening intervention in Syria by the guerrilla group set up by Iran in the 1980s to fight Israeli occupation troops in south Lebanon.

The reported Hezbollah losses also reflect the extent to which the Syrian conflict is turning into a proxy war between Shi’ite Iran and U.S.-aligned Gulf Arab states such as Saudi Arabia and Qatar, which back Assad’s mostly Sunni foes.

Western countries and Russia, an ally of Damascus, back opposing sides in this regional free-for-all which is also sucking in Israel. Three times this year Israeli planes have bombed presumed Iranian arms stocks destined for Hezbollah.

Israeli Prime Minister Benjamin Netanyahu said his country was “preparing for every scenario” in Syria and held out the prospect of more Israeli strikes inside Syria to stop Hezbollah and other opponents of Israel getting advanced weapons.

Israel has not confirmed or denied reports by Western and Israeli intelligence sources that its raids targeted Iranian missiles stored near Damascus that it believed were awaiting delivery to Hezbollah, which fought a war with Israel in 2006.

Syrian opposition sources and state media gave widely differing accounts of Sunday’s ferocious clashes in Qusair, long used by rebels as a supply route from the nearby Lebanese border to the provincial capital Homs. Hezbollah has not commented.

The air and tank assault on the strategic town of 30,000 people appeared to be part of a campaign by Assad’s forces to consolidate their grip on Damascus and secure links between the capital and government strongholds in the Alawite coastal heartland via the contested central city of Homs.

The government campaign has coincided with efforts by the United States and Russia, despite their differences on Syria, to organise peace talks to end a conflict now in its third year in which more than 80,000 people have been killed.

A total of 100 combatants from both sides were killed in Sunday’s offensive, according to opposition sources, including the British-based Syrian Observatory for Human Rights.

“If Qusair falls, God forbid, the opposition in Homs city will be in grave danger,” said an activist who called himself Abu Jaafar al-Mugharbil.

State news agency SANA said the army had “restored security and stability to most Qusair neighbourhoods” and was “chasing the remnants of the terrorists in the northern district”.

However, opposition activists said rebels in Qusair, about 10 km (six miles) from the Lebanese border, had pushed back most of the attacking forces to their original positions in the east of the town and to the south on Sunday, destroying at least four Syrian army tanks and five light Hezbollah vehicles.

The Western-backed leadership of the Free Syrian Army, the loose umbrella group trying to oversee hundreds of disparate rebel brigades, said the Qusair fighters had thwarted Hezbollah with military operations it dubbed “Walls of Death”.

Syrian government restrictions on access for independent media make it hard to verify such videos and accounts.

“NO DIALOGUE WITH TERRORISTS”

The fighting raged as Western nations seek to step up pressure on Assad – Britain and France want the European Union to allow arms deliveries to rebels – while preparing for the peace talks brokered by Russia and the United States next month.

Assad has scorned the idea that the conference expected to convene in Geneva could end a war that is fuelling instability and deepening Sunni-Shi’ite rifts across the Middle East.

“They think a political conference will halt terrorists in the country. That is unrealistic,” he told the Argentine newspaper Clarin, in reference to Syria’s mainly Sunni rebels.

Assad ruled out “dialogue with terrorists”, but it was not clear from his remarks whether he would agree to send delegates to a conference that may falter before it starts due to disagreements between its two main sponsors and their allies.

The fractured Syrian opposition is to discuss the proposed peace conference at a meeting due to start in Istanbul on Thursday, during which it will also appoint a new leadership.

Attacks by troops and militias loyal to Assad, who inherited power in Syria from his father in 2000, have put rebels under pressure in several of their strongholds in recent weeks.

Assad, from Syria’s minority Alawite sect, has been battling an uprising which began with peaceful protests in March 2011. His violent response eventually prompted rebels to take up arms.

Hezbollah has supported Assad throughout the crisis but for months denied reports it was fighting alongside Assad’s troops.

The Syrian Observatory for Human Rights put the Hezbollah casualties on Sunday at 23 dead and more than 70 wounded, while 48 rebel fighters and four civilians were also killed.

Video footage purportedly showed a Syrian tank on fire at a street corner in the town. In another video a warplane was shown flying over the town amid the sound of explosions.

Lebanese security sources said at least 12 Hezbollah fighters were killed in Qusair on Sunday. Seven were to be buried in the Lebanese town of Baalbek and nearby villages on Monday.