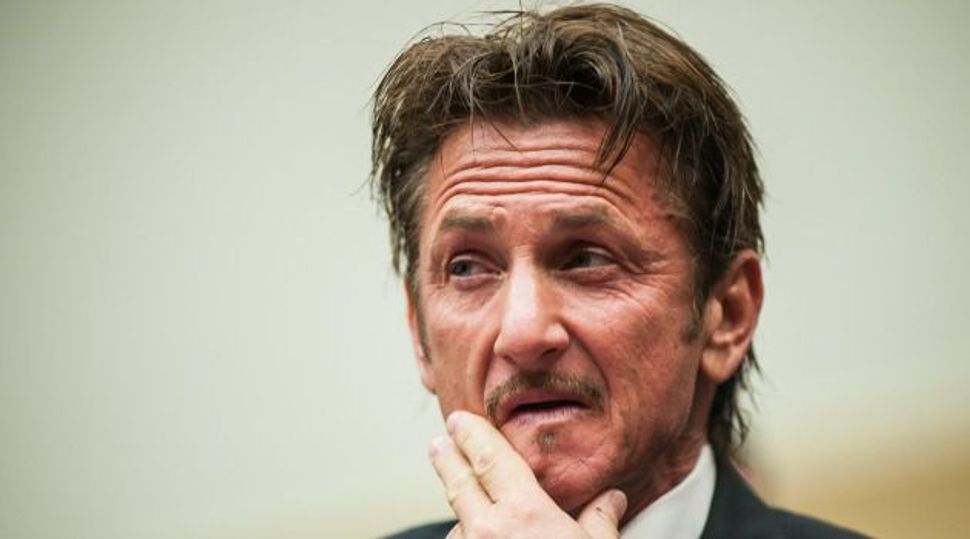 Advocate: Actor Sean Penn speaks at a Congressional hearing on the imprisonment of Hasidic businessman Jacob Ostreicher in the south American nation of Bolivia. Image by getty images

Actor Sean Penn urged a congressional hearing to pressure Bolivia to release a haredi Orthodox father of five under house arrest in the country.

Penn appeared Monday at a hearing on the case of Jacob Ostreicher of Brooklyn, who has been held nearly two years in Bolivia on accusations that he was in business with drug traffickers and money launderers. No proof has ever been provided in court.

U.S. Rep. Chris Smith (R-N.J.), who has gone to Bolivia in an effort to free Ostreicher, held the hearing.

Penn, an Academy Award winner well known for his social activism, told the hearing that he has spoken to Bolivian President Evo Morales and believes that although Morales has the best of intentions, the judiciary is so corrupt in his country that the president is powerless.

Penn urged Congress to write letters to the corporate sponsors of the Dakar Rally motorcycle race, which in 2014 for the first time will go through Bolivia. As the race is a huge moneymaker for the participating countries, Penn said pressure should be exerted on the sponsors to demand the release of Ostreicher.

If Ostreicher is not freed, Penn said, the race should be rerouted to avoid Bolivia, depriving it of money and positive publicity.

The actor said he was “not only personally and thoroughly convinced of Mr. Ostreicher’s innocence, but particularly alarmed by a consensus both among Bolivian officials that the unevidenced prosecution against Jacob Ostreicher was standard operating procedure in the fundamentally corrupt Bolivian judiciary.”

Ostreicher invested in a rice-growing venture in Bolivia and was managing the business when he was arrested on suspicion of money laundering.

Penn said Ostreicher’s only crime was “to have brought a successful rice concession and well-paying jobs to Bolivia.”

Ostreicher’s wife, Miriam Ungar, told the hearing that Ostreicher does not believe he will ever be free and often unplugs his home phone because he is too depressed to speak with his family.

During the hearing, Smith said he would be reintroducing his bill, nicknamed “Jacob’s Law,” that would deny entry into the United States “to officials of any foreign government, including their immediate family members “who are involved in failing to allow due process or are involved in any human rights violations against a jailed American.”