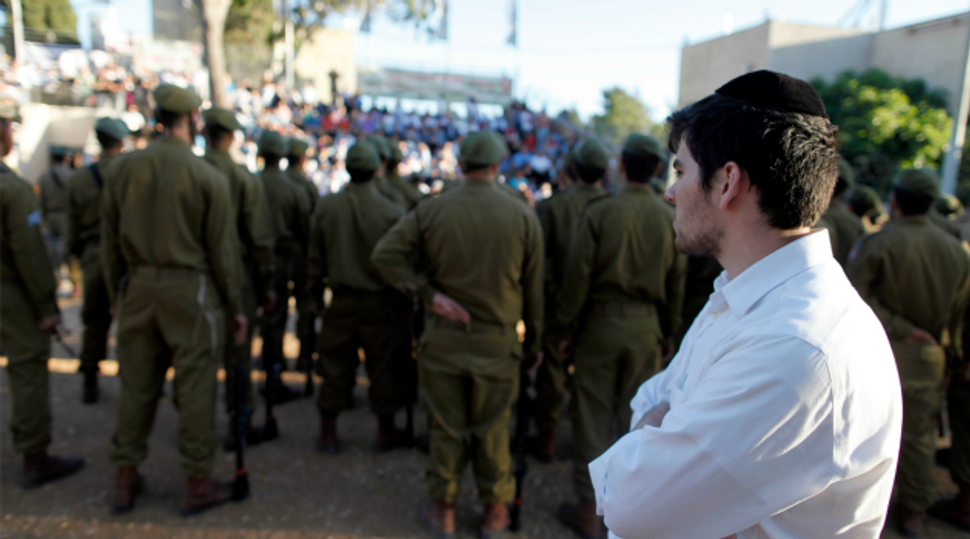 Share the Burded: An ultra-Orthodox Jew watches a military graduation parade. Israel?s coalition reached a deal to phase out the the exemption from national service for Haredi youth. Image by getty images

The issue of “sharing the national burden” is at the heart of heated debate over privileges the ultra-Orthodox minority has enjoyed for decades, and a government-appointed committee had failed to formulate a new conscription law earlier this week.

Defence Minister Moshe Yaalon, a member of Prime Minister Benjamin Netanyahu’s right-wing Likud party, had balked at a clause under which criminal charges would be brought against those trying to dodge conscription.

Netanyahu’s main coalition partner, the centrist Yesh Atid party, threatened on Monday to quit the government unless the issue was resolved.

In a compromise that paved the way for the deal, the committee agreed on sanctions but delayed imposing them during a four-year interim period in which the military will encourage 18-year-old Bible scholars to enlist, political officials said.

Under the proposed law, which still faces ratification in the cabinet and parliament, the number of seminary students exempted from the military each year will be limited to 1,800 of the estimated 8,000 required to register for the draft annually.

Welcoming the agreement on the proposed law, Yesh Atid leader Yair Lapid told a news conference: “The government proved it can make a change, even on the most explosive issues.”

Yesh Atid came second to Likud in the January general election on a pledge to reduce state benefits for Israel’s fast-growing ultra-Orthodox minority and end military service exemptions for the community.

For the first time in a decade, Israel’s government has no ultra-Orthodox members, and main coalition partners had pressed Netanyahu to break with political tradition and enact reforms under a slogan of “sharing the national burden”.

Most Israeli men and women are called up for military service for up to three years when they turn 18. However, exceptions have been made for most Arab citizens of Israel, as well as ultra-Orthodox men and women.