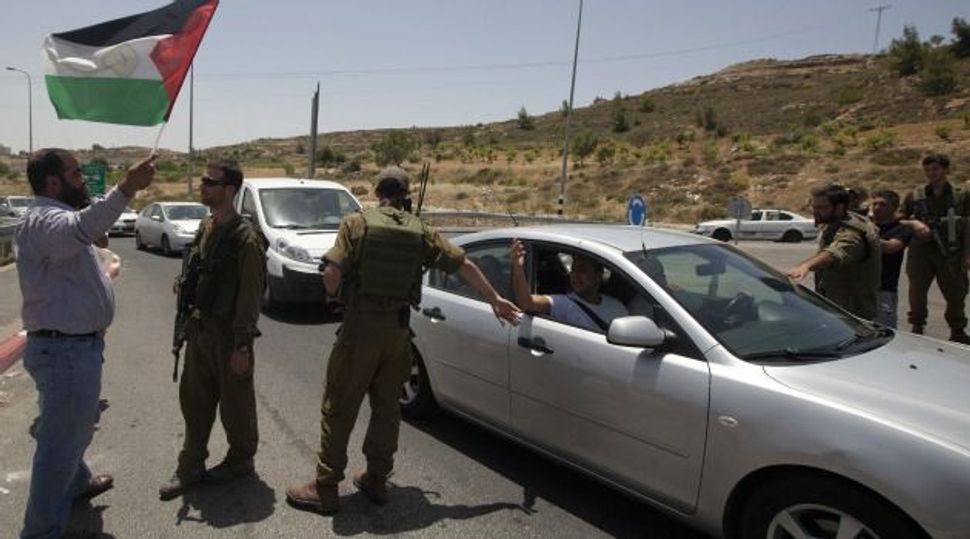 Rising Tension: Jewish settler and Palestinian man face off in West Bank highway. Tensions are increasing in the occupied territory.

Fourteen Palestinian vehicles were vandalised on Wednesday in the occupied West Bank and Arab East Jerusalem in what appeared to be attacks by militant Israeli settlers following the killing of one of their own last month.

No arrests were immediately made in the so-called “Price Tag” incidents. The term is used by militant settlers who say they will exact a price for Palestinian attacks or any attempts by the Israeli government to curb settlement activity.

“Regards from Eviatar. God will avenge his blood,” read a slogan sprayed in the Palestinian village of Zubeidat, in a reference to Eviatar Borovsky, a settler stabbed to death by a Palestinian in the West Bank on April 30.

Israeli police and the military said vandals damaged seven vehicles in Zubeidat and in another West Bank village, Marj en-Naja. Another seven cars were vandalised in East Jerusalem.

“Price Tag” attacks have targeted churches and monasteries, as well as Palestinian mosques and homes and Israeli military installations in the West Bank.

Some 2.5 million Palestinians live in the West Bank and East Jerusalem, which Israel captured – along with the Gaza Strip – in the 1967 Middle East war and Palestinians now want for a future state. Peace talks have been frozen since 2010.

More than 500,000 Jewish settlers live in the West Bank and East Jerusalem. Israel withdrew settlers from Gaza in 2005.