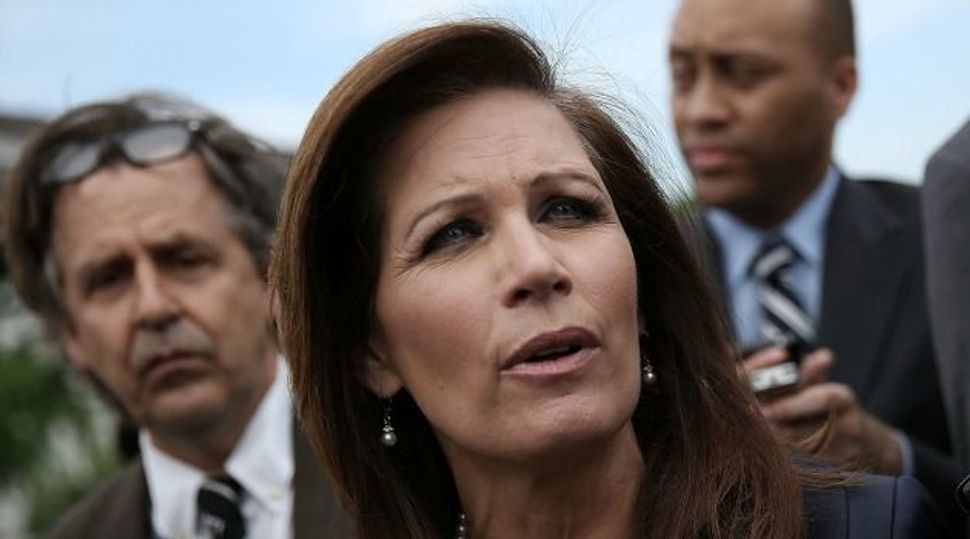 Parting Shot: Conservative Michele Bachmann blasted President Obama?s policies on Israel in a video announcing she would not seek reelection to Congress. Image by getty images

In a video announcing her plans to leave Congress, Rep. Michele Bachmann cited her criticisms of the Obama administration’s Israel policies as among her accomplishments.

“I pointed out this administration’s despicable treatment toward our great friend and ally Israel, and at the same time giving little more than lip service to the ever increasing and dangerous nuclear threat of Iran,” Bachmann said in a video posted Wednesday on her election website.

President Obama had in his first term tense relations with the government of Prime Minister Benjamin Netanyahu because of disagreements over peace negotiations with the Palestinians.

He also enhanced the security relationship and introduced new measures to isolate Iran, and in his second term has generally had good relations with the Israeli government.

In the video, which is nearly nine minutes long, Bachmann said her decision to leave had only to do with what she thought was an acceptable length of time of service for a member of the U.S. House of Representatives, eight years.

She said her decision did not have to do with a strong showing by a Democratic challenger in the last election or questions by a number of law enforcement agencies about how she ran her 2012 bid for the Republican nomination for president.