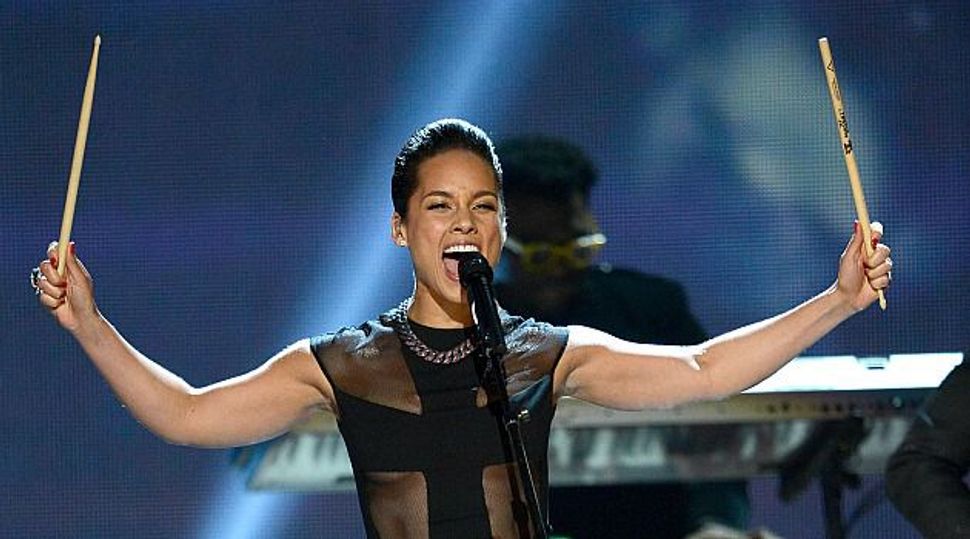 Controversial Show: Songbird Alicia Keys is scheduled to perform on July 4 in Israel. Alice Walker is trying to get her to cancel the gig and join the cultural blockade. Image by getty images

Novelist Alice Walker, who is slated to speak at Manhattan’s 92nd Street Y, called on singer Alicia Keys to boycott Israel and cancel a scheduled concert there.

In an open letter posted on her website, Walker wrote, “It would grieve me to know you are putting yourself in danger (soul danger) by performing in an apartheid country that is being boycotted by many global conscious artists.”

Keys is scheduled to perform in Tel Aviv on July 4.

Walker, who is slated to speak Thursday at the Y, has called Israel the world’s “biggest terrorist,” described suicide bombings as “last-ditch resistance” in saying it was dishonest to engage in “blaming the oppressed for using their bodies where the Israeli army uses armored tanks,” and refused to allow “The Color Purple,” her Pulitzer Prize-winning novel about black life in the segregated South, to be translated into Hebrew. She also participated in a flotilla of ships attempting to break Israel’s naval blockade of Gaza.

A group called JCC Watch called on the 92nd Street Y to cancel Thursday’s event with Walker, at which she is scheduled to discuss her activism and her writing with Eve Ensler, author of “The Vagina Monologues.”

The Y did not respond to a request seeking comment.

“A cultural boycott of Israel and Israeli institutions (not individuals) is the only option left to artists who cannot bear the unconscionable harm Israel inflicts every day on the people of Palestine, whose major ‘crime’ is that they exist in their own land, land that Israel wants to control as its own,” Walker wrote in her letter to Keys. “This is actually a wonderful opportunity for you to learn about something sorrowful, and amazing: that our government (Obama in particular) supports a system that is cruel, unjust, and unbelievably evil.”