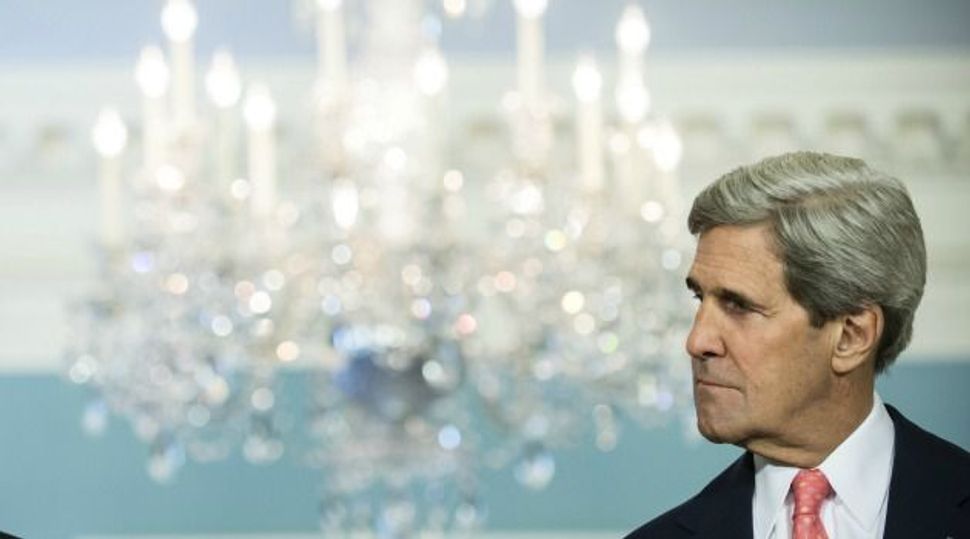 Lone Ranger: Is John Kerry headed for failure in the Middle East? Image by getty images

Four months into his term, U.S. Secretary of State John Kerry is trying, simultaneously, to end two of the world’s most intractable conflicts: the Syrian civil war and the struggle between Israel and the Palestinians.

The two issues, according to an aide, have consumed the vast majority of Kerry’s time and energy – he has already flown more than 100,000 miles to 23 countries, including four trips to Israel – since he took office Feb. 1.

What is unclear, however, is whether all the movement will lead to progress, or whether it will go down as the quixotic, if laudable, efforts of an enthusiastic new secretary of state.

Success, or even progress, could increase Kerry’s clout with foreign interlocutors and at the White House. Failure could tarnish his early months and, in the case of Israeli-Palestinian peace, add his name to a long list of chief U.S. diplomats who have tried and then moved on to other challenges.

Kerry, a former chairman of the Senate Foreign Relations Committee, is well-known in Washington and the corridors of power in foreign capitals, even if he may lack the global star-power of his predecessor, Hillary Clinton.

But what he is attempting is arguably more ambitious than where Clinton – another failed presidential candidate turned chief diplomat – was at the same stage four months into her tenure in the job.

Unlike Clinton though, Kerry is not hamstrung by trying to preserve an ability to run for president again and so perhaps has greater latitude to press Israel to make concessions to the Palestinians without fear of alienating Jewish American voters.

The next several weeks may provide clues on whether Kerry’s efforts in Arab-Israeli peace-making and in trying to find a diplomatic solution to the more than two years of violence in Syria will bear fruit.

Nearly 20 years after the Israelis and Palestinians formally began their peace process through the Oslo Accords, there is deep skepticism on both sides that peace is possible.

Among the issues to be settled in any agreement to end the more than six-decade conflict are borders, the future of Jewish settlements on the West Bank, the fate of Palestinian refugees and the status of Jerusalem.

Palestinian officials have said Kerry has given them until June 7 to let the United States know whether they are serious about the possibility of reviving peace talks.

While Kerry has not explicitly confirmed the deadline – and it could be extended – on May 24 he said “we’re getting towards a time now where hard decisions need to be made.”

Even before taking office, Kerry made no secret of his desire to try to solve the conflict. But he has acknowledged the deep skepticism, saying a week ago that “it is famously reputed to be diplomatic quicksand.”

Having spent most of his career in the U.S. Senate, where personal relationships are vital to getting things done, Kerry believes in the virtue of face-to-face diplomacy and has used his facility with languages to slip into French, German, Italian and even, occasionally, a word of Arabic to charm audiences.

He also makes a point of visiting cultural icons when abroad, laying a wreath at Tomb of the Unknown Soldier in Moscow, touring Tokyo’s Zojo-ji Temple and paying his respects at Ataturk’s Tomb in Ankara.

However, he has been subjected to some withering criticism.

“Despite his good intentions, Kerry so far looks like a naive and ham-handed diplomat who has been acting like a bull in the china shop of the Israeli-Palestinian conflict,” wrote Barak Ravid, diplomatic correspondent for Israel’s Haaretz newspaper.

For all Kerry’s efforts, questions linger about whether U.S. President Barack Obama has any real willingness to try a second time on Middle East peace, having promised to make it a priority at the start of his first term but failing to make any progress.

“It is a Lone-Ranger type of effort so far,” said Marwan Muasher, a former Jordanian foreign minister who is now at the Carnegie Endowment for International Peace think tank.

“The perception in the region is this is a process of buying time … that the White House is not serious about committing to what it takes to get this issue resolved,” Muasher added.

A senior U.S. official disputed the notion that Kerry was naive and said the Obama administration was prepared to abandon the effort if it judges that the Israelis and Palestinians are not serious about pursuing peace.

“That’s what shows he’s not naive,” said the official of Kerry’s willingness to pull back if he does not see both sides as ready. “There’s too many things going on in the world … You could bang your head on this for years and years and years.”

Rob Danin of the Council on Foreign Relations think tank said that Obama’s legendary control over foreign policy decision-making meant Kerry must have had a White House green light to explore the Syria and Israeli-Palestinian initiatives.

“Clearly these approaches have been initiated and designed by Secretary Kerry,” Danin said. “But given the equities involved, it is inconceivable to think that he is freelancing.”

Kerry appears to be attempting something equally ambitious in trying to end the Syrian civil war, which began as peaceful protests against President Bashar al-Assad’s government and has evolved into a full-scale sectarian conflict.

More than 80,000 people are believed to have been killed in the fighting, which has made millions of people homeless and begun to draw in regional parties such as Lebanese Hezbollah, which is fighting on the side of Syrian forces.

Efforts to try to address the conflict at the U.N. Security Council have been stymied by vetoes by Russia, which has a naval base in Syria and has backed Damascus with arms deliveries.

However, after talks with Russian President Vladimir Putin and Foreign Minister Sergei Lavrov, Kerry announced in Moscow on May 7 that the United States and Russia would try to bring the warring parties to a peace conference.

Kerry initially said the conference could be held by the end of May, and then suggested it might happen in early June. There are now signals that it could slip until July, in part because of the difficulties the opposition has in unifying.

In the meantime, Assad has begun an offensive to capture the strategic town of Qusair in what many see as a bid to link territory from the capital Damascus up to his Alawite community’s heartland on the Mediterranean coast.

The move is widely seen as an attempt by Assad to try to strengthen his hand ahead of the peace conference.

On Kerry’s part, his push for the conference may in part be an effort to demonstrate that Washington has left no stone unturned in pursuing diplomacy before deciding whether to arm the Syrian rebels, a step Obama has so far resisted.

“It is entirely possible that Secretary Kerry realizes that the only way that he is going to affect the president’s calculations on arming the opposition is to first demonstrate that he has gone the extra diplomatic mile – and failed,” CFR’s Danin said.