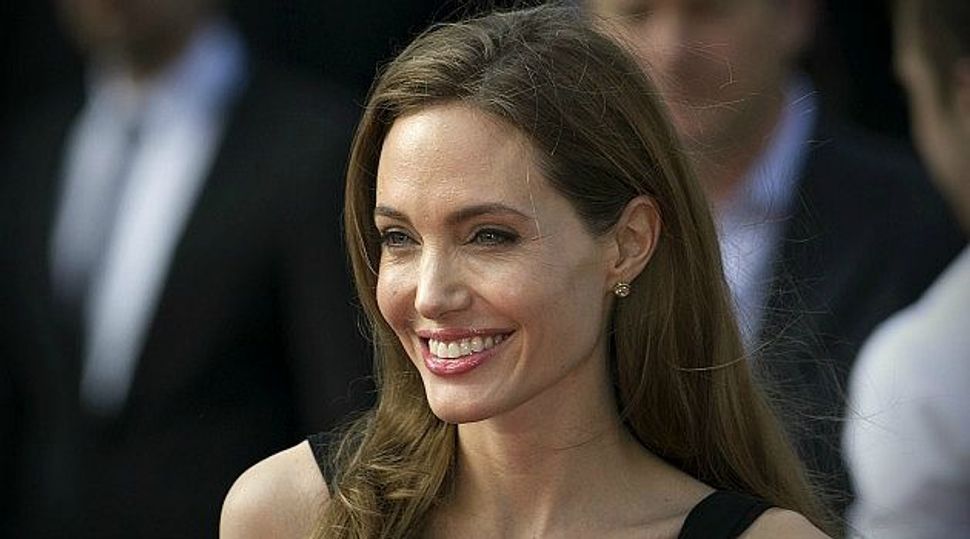 Still Stunning: Angelina Jolie smiles for fans at a movie premiere in London. The Hollywood superstar was making her first appearance since she announced she underwent a double mastectomy over breast cancer fears. Image by getty images

Angelina Jolie made her first public appearance since announcing her double mastectomy on Sunday, joining fiance Brad Pitt on the red carpet in London where she welcomed the debate on women’s health that the surgery had sparked.

The Oscar-winning actress has stayed out of the spotlight since announcing her operation in a New York Times column last month, saying the decision was made after finding she carried a gene giving her an 87 percent chance of getting breast cancer.

The 37-year-old mother of six, praised for her courage in publicly announcing her surgery, is now reported to be planning another operation to remove her ovaries as the BRCA1 gene also gives her a 50 percent chance of ovarian cancer.

Jolie disclosed she has the BRCA-1 gene mutation that leads to higher rates of breast cancer.

The mutation is more prevalent among European Jewish women than the general public.

Many doctors and Jewish breast cancer advocates cheered her decision to have the surgery, and to discuss it publically. Some have warned that preventive surgery may not always be the best option for every woman.

On the red carpet for the world premiere of Pitt’s latest movie, zombie blockbuster “World War Z”, Jolie praised her partner as being “a wonderful man and a wonderful father.

“I’m very, very grateful for all the support … and I have been very happy just to see the discussion of women’s health expanded and that means the world to me,” she told reporters.

“After losing my mom to these issues, I am very grateful for it,” added the American actress, wearing a long black, backless Yves Saint Laurent dress.

Jolie’s mother, actress Marcheline Bertrand, died from ovarian cancer in 2007 at the age of 56 and her aunt, 61-year-old Debbie Martin, died last week as a result of breast cancer.

Jolie missed her aunt’s funeral to accompany Pitt to London for the premiere of “World War Z”, an adaptation of Max Brooks’ 2006 apocalyptic novel.

Pitt’s production company Plan B Entertainment bought the screen rights to the novel about six years ago and it is one of the big box office releases this summer, but it is under pressure to perform before even opening.

It was due to be released late last year but suffered setbacks amid reports that the budget had ballooned above $200 million and Pitt clashed with director Marc Forster.

In “World War Z”, Pitt plays United Nations representative Gerry Lane who is enlisted to help stop a zombie pandemic that is toppling armies and governments and threatening to destroy mankind.

Pitt said he was proud of the film and also of Jolie for her decision to have a mastectomy for the sake of their family and to share that experience.

“When she’s faced with a problem – and we have known this was coming for some time – she takes it by the horns,” Pitt, 49, also dressed in black, told reporters. “I’m super proud of her. She’s a bad ass.”

Asked how important it was to have her on the red carpet with him, Pitt said: “It’s just more fun to do these things with each other. More fun when she’s around and same for her.”

“World War Z” marks Pitt’s first foray as the star and producer of his own potential franchise.

Pitt said his own children’s reaction to the book sparked the project which ultimately was about survival and family.

“The boys love a zombie,” he said.