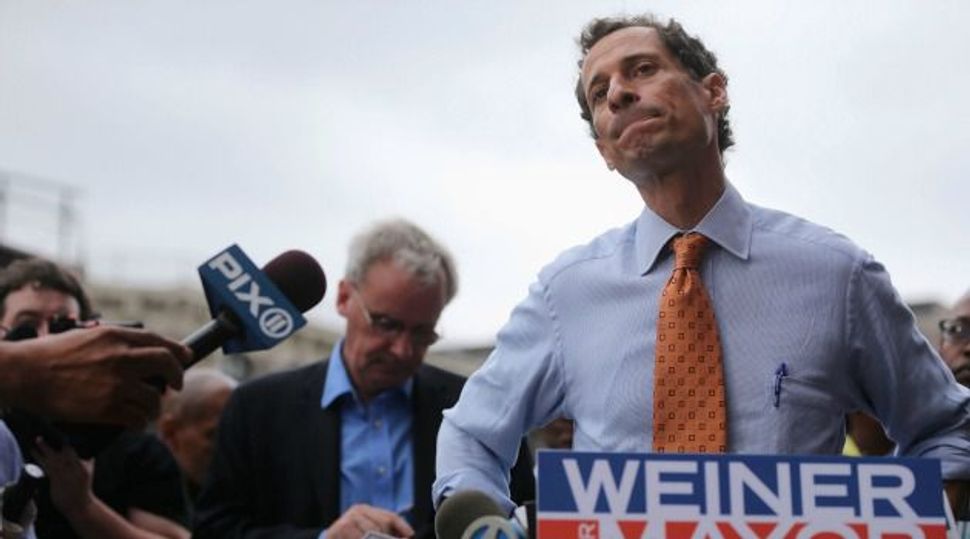 Sporting his trademark grin, the disgraced ex-congressman held an Israeli flag and waved at some 35,000 participants who turned out in sweltering near-90 degree heat.

“When people describe me as being hawkish on Israel, I don’t disagree,” he told the New York Post. “Frankly, they are an island of democracy in a sea of tyrannical regimes.”

Weiner is the only Jewish candidate in a crowded Democratic field including Council Speaker Christine Quinn and Bill Thompson, who nearly unseated Mayor Michael Bloomberg four years ago.

He has yet to catch on with Jewish pols or donors since announcing his comeback plans last month. But he predicted he will win the lion’s share of Jewish votes, noting that he has represented heavily Jewish sections of Brooklyn and Queens.

““The things I’m talking about in this campaign are unifying themes,” he told the Post. “It doesn’t matter where you live, it doesn’t matter what your faith is — you probably believe that this city has become harder for the middle class to live in.”

Despite saying all the right thngs, Weiner got a mixed reaction at best, with jeers and lewd insults flying along the parade route. He was forced out of Congress after sending inappropriate text messages to young women.

“The thing you most need in a mayor … is moral integrity, and this man has trampled on integrity,” Sandy Lebowitz of Midwood, Brooklyn, once Weiner’s political base, told the Daily News.

“He embarrassed himself, and someone like that shouldn’t be elected,” added Karen Gordon of Riverdale, the Bronx.

Not everyone was ready to count out Weiner.

“What he does in his private life and whatever else he’s done in the past, I’m willing to overlook for the sake of New York City,” Jack Gindi of Brooklyn told the Post.