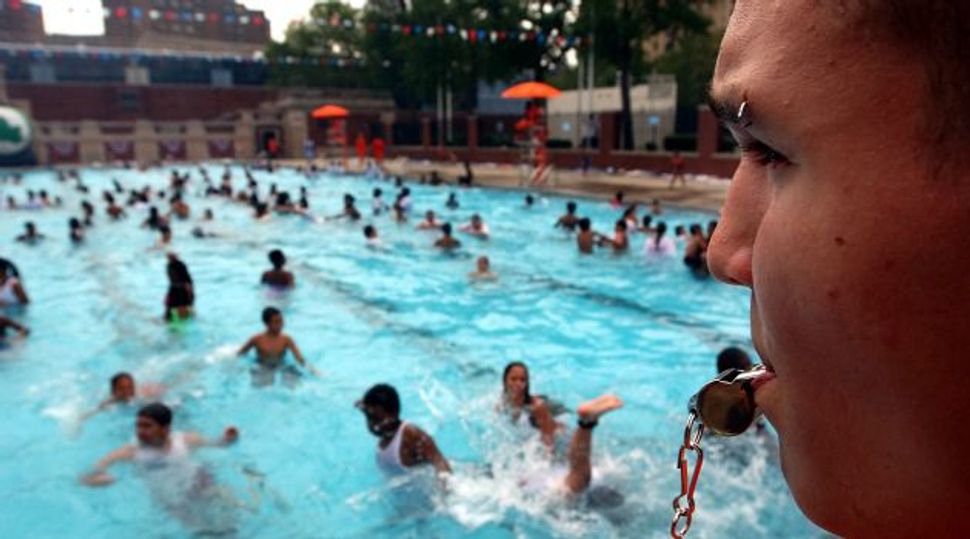 Sweating the Summer: Hasidic women love the pool as much as anyone. But they won?t dip their toes in the water unless there are no men around ? including the lifeguard. Image by getty images

Ultra-Orthodox women in Williamsburg, Brooklyn, want to experience the joys of summer like everyone else. But that may not be possible this year, due to a lack of female lifeguards at the local Metropolitan Recreation Center pool.

With all the clothing restrictions Hasidic women face in the sweltering heat, shedding the layers for a dip in the city’s public pools is allowed. But the pool area must be male-free, and that includes the lifeguard.

There are female-only swim periods at the public pool, which is within walking distance of Hasidic neighborhoods.

But the past two years the female lifeguard took her summer leave in July and August, and was replaced by a man. That is a full two months in which Hasidic women are barred from the pool, lest they commit a breach of modesty.

At a Williamsburg and Greenpoint Community Board 1 meeting last month, Hasidic women voiced their frustration.

“There are hundreds of women who come to the sessions,” Rose Herschkowitz of South Williamsburg told DNAinfo.com. “When there’s a male we don’t come. It’s for modesty… A lot of women cut their membership to the pool because of the lost months of swimming.”

Herschkowitz, 57, attends the three times a week female-only sessions. Both she and her 86-year-old mother rely on the pool as a source of physical fitness.

Edward Janoff, the North Brooklyn Parks leader and the director of the Open Space Alliance, told the DNAinfo that the city is trying its best to secure a female lifeguard, but that they “can’t guarantee it.”

In the meantime, Williamsburg’s female swimming aficionados will have to make do with the few days in June in which their usual female lifeguard will be present. If the summer heat arrives, that is.