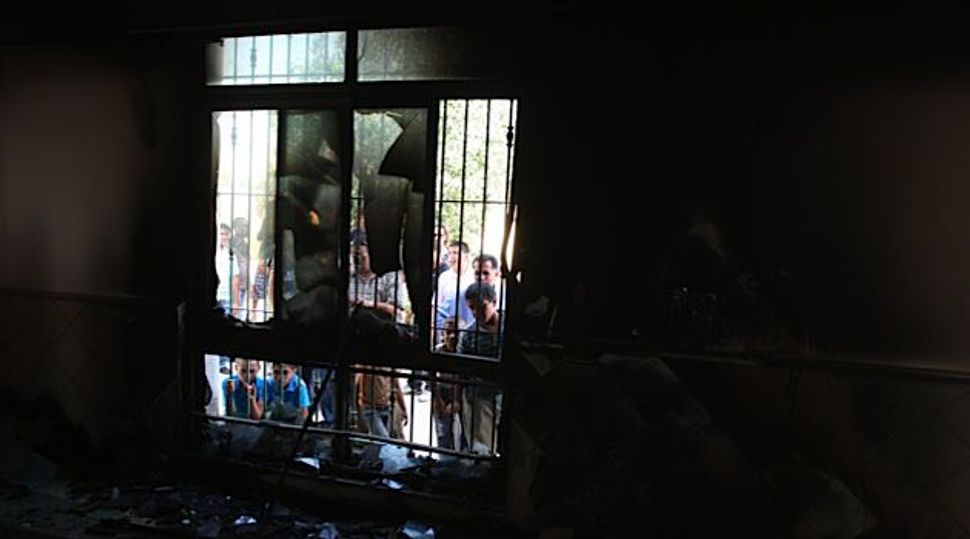 Attacks: Palestinians from the village of Jabaa, east of Ramallah, look through broken glass inside a mosque which settlers tried to burn last summer. Image by Getty Images

Israel approved new measures on Sunday against Jewish ultranationalists who vandalise Palestinian property in a drive to mire security forces in sectarian violence in the occupied West Bank.

Saying they sought to avenge attacks on Jewish settlers, the vandals have torched and spray-painted Palestinian mosques and cars and chopped olive trees in so-called “Price Tag” raids. Churches and Arab property inside Israel have also been hit.

With their potential for upending the West Bank’s relative quiet should Palestinians strike back, and for discouraging any future Israeli evacuation of unapproved settlements, the incidents worry Prime Minister Benjamin Netanyahu’s rightist government. But arrests and prosecutions have been rare.

Netanyahu’s security cabinet said in a statement it had empowered the Defence Ministry to designate “Price Tag” vandals as members of “illicit organisations”, which would in turn “significantly expand the investigative and prosecutorial tools available to the security forces and law-enforcement”.

The statement did not elaborate. An official told Reuters the decision would could effectively bring Israel’s handling of Price Tag suspects into line with its crackdowns on Palestinian militants, entailing longer detentions and jail sentences as well as more intrusive surveillance and interrogations.

The Justice Ministry was separately seeking parliamentary ratification defining Price Tag attacks as “terrorism”, alongside Palestinian and other politically motivated attacks on Israelis, the official told Reuters on condition of anonymity.