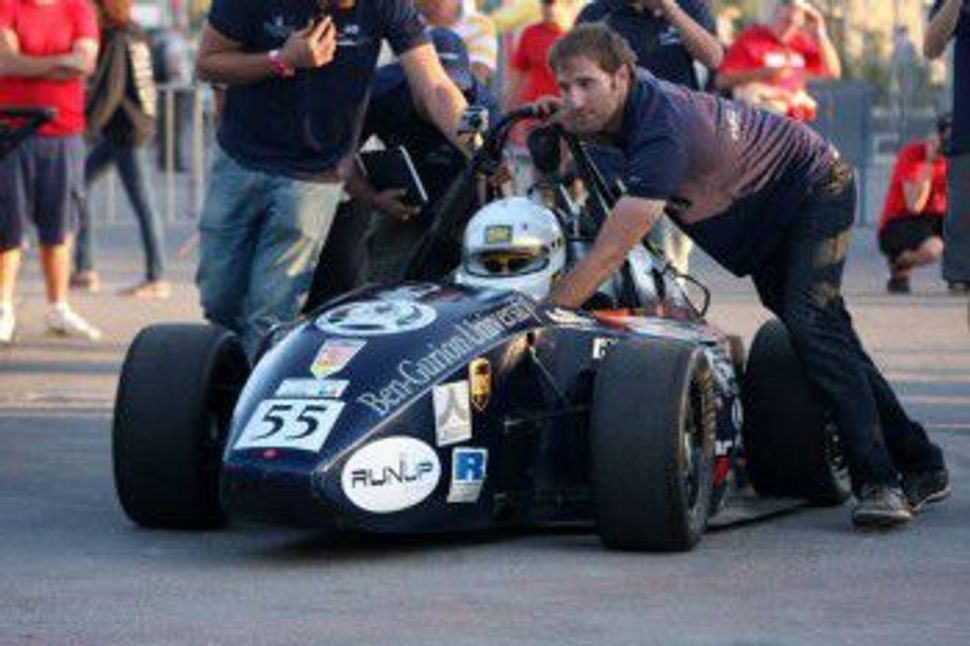 Dror Hazan, right, one of the managers of the Ben-Gurion University Formula project, pushing Rani Dekel, who is driving the race car during the Jerusalem Formula event, June 14, 2013. Image by Raz Schweitzer/Ben Gurion Racing

Last week, Rani Dekel was doing doing donuts on the streets of Jerusalem in a blue and orange Formula race car with hundreds of thousands cheering him on.

On Sunday, the car’s skeleton sat in a bare laboratory at Ben-Gurion University in the southern city of Beersheva, its colorful siding stacked on a shelf in the corner and its essential parts shipped off to auto workshops across Israel.

But Dekel doesn’t mind losing his car. In a couple of months, he’ll have built a new one. 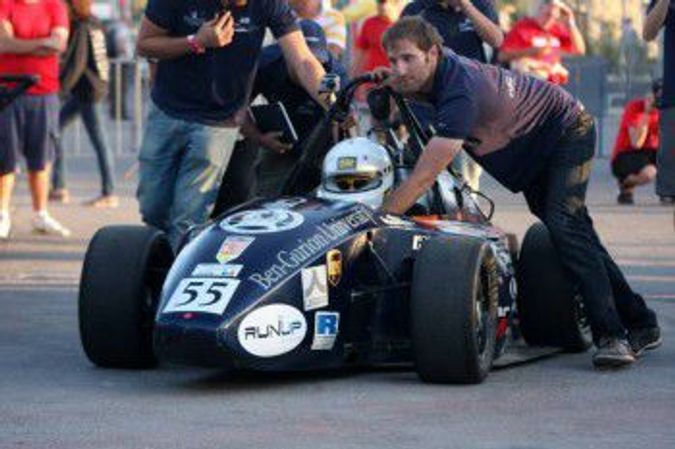 Dror Hazan, right, one of the managers of the Ben-Gurion University Formula project, pushing Rani Dekel, who is driving the race car during the Jerusalem Formula event, June 14, 2013. Image by Raz Schweitzer/Ben Gurion Racing

Dekel is part of a team of 35 Ben-Gurion automotive engineering students in the midst of a yearlong project — to design and construct a Formula race car that four of them will drive in an international competition in Italy in September.

“Building the car is super intense,” Dekel said. “It’s your whole life. It’s your focus. You get there and you’re showing what you planned and built and dreamed about.”

Dekel’s car was the only Israeli-made vehicle in last week’s Jerusalem Formula show, the biggest auto racing event in the country’s history.

In Formula 1 racing, drivers sit in low cars built by leading European carmakers such as Ferrari and Mercedes and careen around twisting tracks at speeds in excess of 200 mph. The brand is especially popular in Europe. Israel has no car industry, let alone a motor sports league, so a delegation of auto racers zooming around Jerusalem was thrilling for locals. The show featured top international auto racers doing laps, spins and donuts — a spinning maneuver — in the shadow of the Old City walls.

But while a reported 250,000 Israeli racing fans had their eyes on the streets of Jerusalem, the future of the sport in Israel lies an hour south, in the sands of the Negev Desert and the nearby engineering labs of Ben-Gurion University. Next year, the country’s first motor sports complex is slated to open just north of Beersheva.

“One thing is for sure: There’s an Israeli audience that’s interested,” said Dror Karavany, who manages the development of the Bnei Shimon track.

For the student team at Ben-Gurion, though, Jerusalem Formula was merely a milestone en route to the main event: a sleeker design and a strong finish at Formula SAE, a competition in which student teams worldwide race homemade cars through the streets of Varano de’ Melegari, in northern Italy. Last year, the Israeli team placed 11 in a field of 42.

The Ben-Gurion team began working toward this year’s race last summer, when the students split into pairs and each tandem chose a part of the car to design. Each pair then spent a couple of months studying its part before starting the design on a computer.

“The car is a huge number of different specialties that go into one machine,” said Dor Efroni, one of the project’s managers. “No one thing is more important than the next. Each small aspect needs to be perfect.” Last year, Efroni worked on the car’s steering system; this year he’s in charge of the gearshift. His goal, he said, is to find the optimal balance between the engine’s weight and the car’s acceleration.

The main difference between last year’s model and the current one is that the motor oil is now in a container next to the engine rather than under it, which allows for the engine to be lower and the car faster. Last year’s car went from zero to 60 miles per hour in less than 4 seconds.

After the car is designed on screen, the students work with Israeli auto shops to build the parts, often using their own street-legal cars to move parts from the Negev up north. Students from Jerusalem’s Bezalel Academy of Arts and Design fashion the car’s siding.

Efroni wants the car done by July, followed by testing and driving training before it is shipped to Italy in September.

“It’s a crazy feeling,” Efroni said of the competition. “It’s four days of a huge high.”

Dekel and Efroni both said they would pursue jobs building Formula cars if the industry existed in Israel, but the country has no racetracks or racing teams.

With the opening of the Bnei Shimon complex, which has been in the works for nearly a decade, that may change. The complex will feature a 1.3-mile paved track for rally cars and motorcycles, and a school for race-car driving.

At a later stage, the 80-acre complex will include an automobile museum and a track suited to Formula cars. For now, Karavany hopes foreign drivers will be drawn by Israel’s weather, which allows for driving in winter when racing is impossible in Europe.

Backers of the project also hope the driving school will help fix a chronic problem in Israel: deaths on the road. “When someone learns safe driving and race-car driving, only then will he learn his limits as a driver,” said Zion Ofri, a lead investor in the Bnei Shimon complex. “Then he learns to drive cautiously.”

Some in the small world of Israeli motor sports would rather see the country invest in races featuring stock cars and motorcycles, which could use the Bnei Shimon track next year, rather than Formula 1.

But for enthusiasts like Dekel, the chance to drive on the streets of Jerusalem is an experience unlike any other. “It was like being Madonna’s opening act,” he said. “To make so many people happy was like magic.”