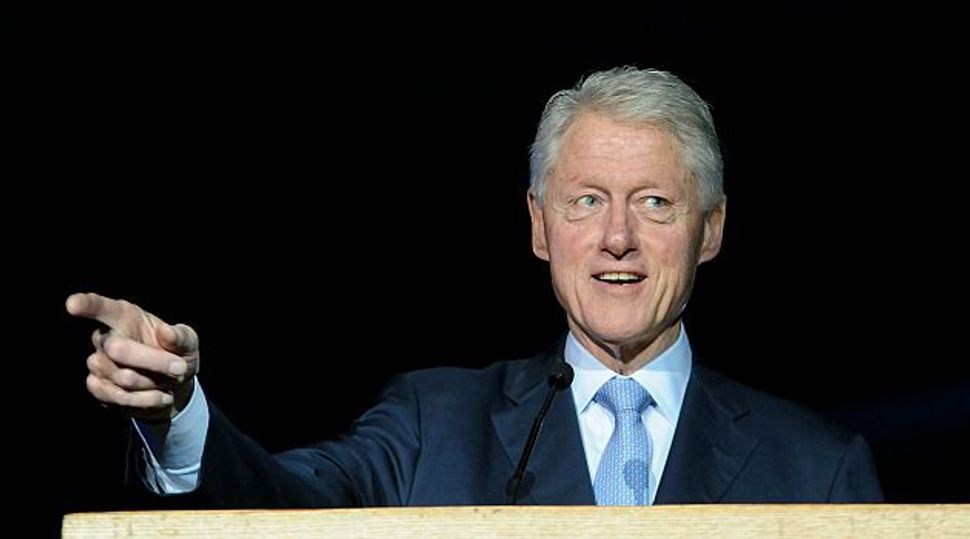 Former President Bill Clinton urged Israel to seek a two-state solution to reach a longlasting peace with the Palestinians in a closely watched speech in Tel Aviv.

Pushing the efforts of Secretary of State John Kerry, Clinton told the Israeli audience that there is no alternative an agreement that would create a Palestinian state alongside Israel.

Clinton illustrated the importance of making difficult compromises by recalling a conversation he had with then Israeli prime minister Yitzhak Rabin just before the peace ceremony of the Oslo agreement with Yasser Arafat, then a reviled terrorist in the eyes of most Israelis.

“I said to Yitzhak, ‘You know there are going to be a billion people watching this on television, you have to shake (Yasser Arafat’s) hand,’” Clinton recalled. “I’ll never forget what he said. He said, ‘ I suppose so. After all you don’t make peace with your friends.’”

Clinton’s speech brought to an end a saga involving the Jewish National Fund, the Peres Academic Center (PAC) and the $500,000 fee Clinton was supposed to receive for the speech.

The former president announced he would donate the money he received for his keynote address to a fund sponsoring scholarships for the college’s students. The JNF backed out of sponsoring the event after receiving heavy criticism for improper use of donor’s money. By donating his fee back to the PAC’s scholarship fund, Clinton is bailing out the small academic institution that was left with the half a million-dollar bill when JNF withdrew its sponsorship.

The speech was part of an event in honor of Israeli president Shimon Peres, which took place at the PAC campus in Rehovot. The majority of Clinton’s speech was devoted to praising president Peres’ role in maintaining Israel’s security.

“He is clearly the world’s greatest visionary,” Clinton said. “One of the reasons he’s lived this long is that he always lives in the future, not that past. He is always thinking about tomorrow.”