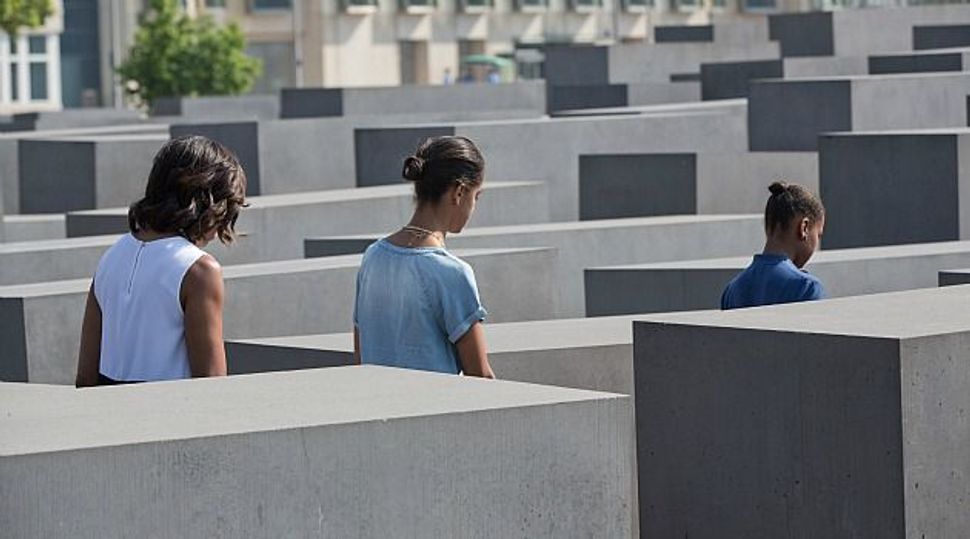 According to Uwe Neumaerker, director of the memorial, the Obamas made their way Wednesday morning through a part of the sea of 2711 stele that make up the memorial, which was designed by American-Jewish architect Peter Eisenman and opened to the public in May 2005, on the 60th anniversary of the end of World War II. They also were guarded by helicopters hovering over the area.

The Obamas were accompanied by Auma Obama, President Barack Obama’s half-sister, about whose existence he reportedly learned only after his father’s death in 1982. Auma Obama, 53, studied in Germany and lives in Kenya, where she was born.

The visit took place as President Obama stopped in Berlin for meetings with Chancellor Angela Merkel and opposition leader Peer Steinbrück following the G-8 Summit Meeting in Ireland. Obama is to address a crowd of some 4,000 registered guests at the Brandenburg Gate later in the day, a location that is reserved for heads of state.

Around that time, all windows facing the site must remain closed, including the offices of members of parliament. Even movement in front of windows reportedly is banned.

The First Lady and her daughters were scheduled to spend the day immersed in the modern history of Berlin, including the Holocaust memorial visit and a stop at a memorial dedicated to the history of the Berlin Wall, which divided East and West Berlin and symbolized the Cold War between the superpowers for 28 years. The wall was rendered superfluous in 1989, and German unification soon followed.

Obama and her daughters threaded roses through the narrow slots of a Berlin Wall memorial honouring those who died trying to cross the Cold War barrier at a site which holds special poignancy in the once divided city.

Accompanied by Angela Merkel’s husband Joachim Sauer, who like the German leader hails from the former East Germany, President Barack Obama’s family toured the Bernauer Strasse memorial where desperate residents of East Berlin once tried to jump from their windows into the western half of the city.

At Bernauer Strasse, the wall, erected in 1961 by East Germany’s communist rulers to prevent citizens from fleeing to the West, cut right in front of the apartment blocks.

Two years after the wall went up, U.S. President John F. Kennedy visited the west of the city and delivered his famous “Ich bin ein Berliner” speech in which he pledged not to abandon the citizens of Berlin. President Obama’s visit has been timed to coincide with the 50th anniversary of that speech.

“I bring with me the enduring friendship of the American people, as well as my wife Michelle and Malia and Sasha,” Obama told a wildly-cheering crowed during an address next to the Brandenburg Gate, where the wall once stood.

“You may notice they are not here. The last thing they want to do is listen to another speech from me, so they are out experiencing the beauty and the history of Berlin, and this history speaks to us today.”

Bernauer Strasse was the scene of some of the first deaths as people tried to flee.

Yet the street also recalls stories of hope – when residents managed to dig a tunnel to reach the west and where the first segments of the wall were knocked down in 1989.

In scorching sunshine, Michelle, her daughters and the president’s sister Auma mounted a viewing platform from where they could look down onto a stretch of the actual wall and the so-called death strip.