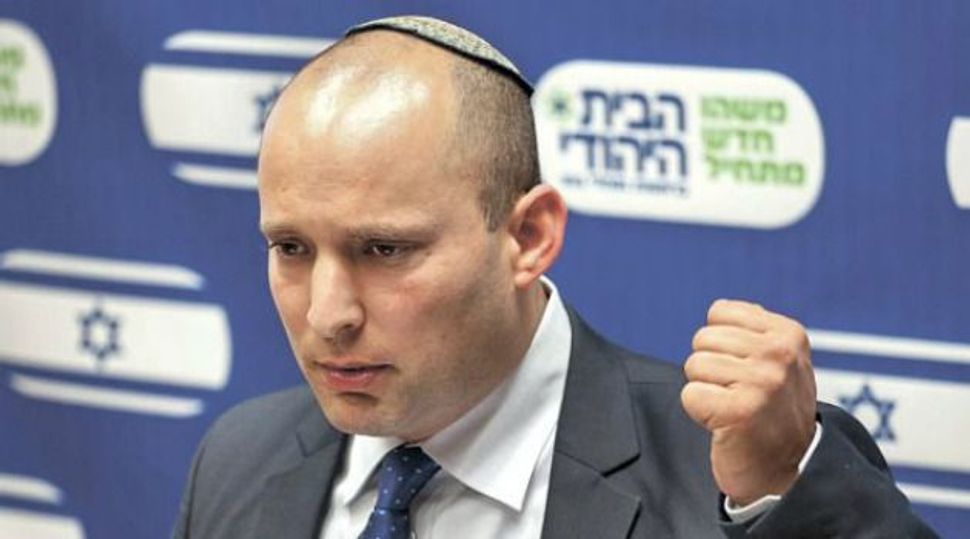 Foreign Criticism: American Jewish leaders fight back against Israeli officials like right-winger Naftali Bennett who says Israel should forget about the two-state solution. Image by Haaretz

American Jewish leaders Abraham Foxman, Rabbi Rick Jacobs and David Harris condemned recent statements by senior Israeli officials about the impossibility of a two-state solution, calling them irresponsible and saying they undermine the credibility of the government.

Earlier this week, Economy Minister Naftali Bennett told a settlers group that the idea of a Palestinian state had reached a “dead end.” His remarks came days after Deputy Defense Minister Danny Danon told Israel Radio that the government will not agree to the establishment of a Palestinian state based on pre-1967 borders and Defense Minister Moshe Ya’alon called the Arab Peace Initiative “spin” during a speech in Washington.

“I think these are all irresponsible statements which do not in any way reflect the commitment of the Israeli government, not to mention the long-standing position of the U.S., that the two-state solution is the only possible solution,” said Rabbi Jacobs, president of the Union for Reform Judaism.

Jacobs, who is in Jerusalem this week to attend the President’s Conference, added: “I think President Clinton said it best last night [at the 90th birthday celebration for President Shimon Peres] when he said a two-state solution is not the fantasy; a one state solution is. This is a black and white issue and Bennett and the others are irresponsible to speak otherwise.”

Foxman, director of the Anti-Defamation League, told Haaretz that the statements “undermine the seriousness of the Israeli government” and compared them to the popular children’s game “whack-a-mole,” in which the furry animals pop up and need to be hammered down time after time.