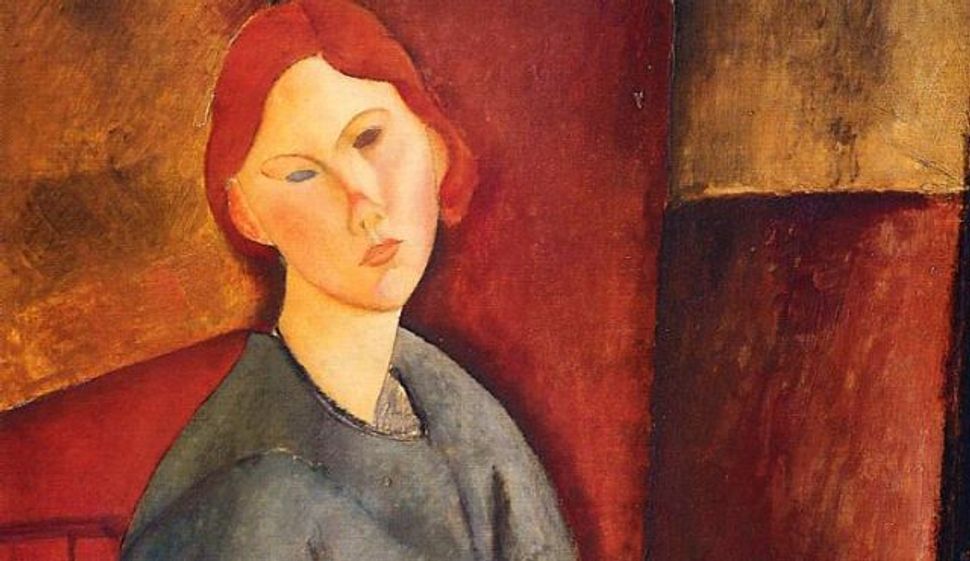 For Sale: The painting ?Portrait de Anne Bjarne? by Amadeo Modigliani will be auctioned off in Israel, but the painting won?t be present. Image by Haaretz

A masterpiece by Italian Jewish artist Amadeo Modigliani, estimated to be worth NIS 30 million (8.25 million dollars), will be offered at public auction in Israel in the coming weeks. It is the most expensive painting ever to be auctioned in Israel. But the painting itself won’t be making an appearance.

Modigliani’s painting is one of 91 works to be shown in Israel in photographs and on film. The Israeli Tax Authority is demanding 18 percent value added tax for the entry of each item into Israel. To avoid the tax, the original paintings will stay in New York, making the U.S. Department of the Treasury the beneficiary of the taxes on their sale.

The Modigliani, called “Portrait de Anne Bjarne” (oil on canvas, 65 x 100 cm), was painted in 1919 and comes from the private collection of millionaire Meshulam Riklis. It is one of 415 works offered for international sale by Matsart Auctioneers and Appraisers. Some of the revenues will be donated by the Israel Dignity Fund, headed by Tali Riklis, for art workshops for disabled Israel Defense Forces soldiers at Beit Halohem veterans’ rehabilitation centers.

To date, three people have expressed interest in the Modigliani – an Israeli, a Spaniard and a Chinese national. They are expected to fly to New York to examine the painting up close.