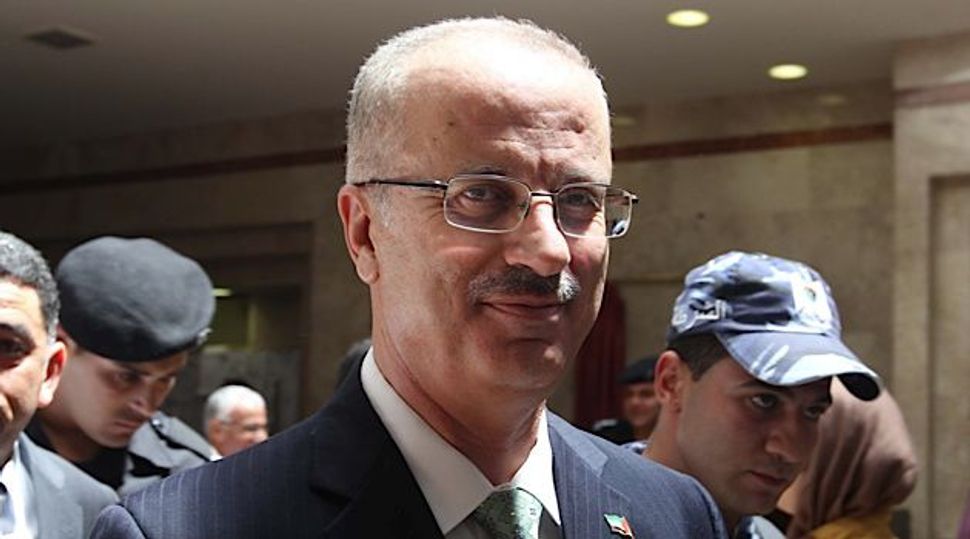 Officials told Reuters that Rami Hamdallah, an academic and independent who became prime minister two weeks ago, decided to step down after a dispute over authority with his deputy, who is an Abbas loyalist and is close to the ruling Fatah party.

“The president accepted the resignation of the prime minister and designated him to head an interim government,” Abbas spokesman Nabil Abu Rdaineh said.

With Abbas setting policy with Israel, the political tussle over the prime ministerial post seemed unlikely to have an impact on renewed U.S. efforts to revive Israeli-Palestinian peace talks.

U.S. Secretary of State John Kerry is due to return in the coming week for another attempt to restart the negotiations frozen since 2010 in a dispute over Jewish settlement expansion on occupied land Palestinians seek for a state.

“When we talk about the peace process, President Abbas is our interlocutor and so it’s not going to have an impact,” State Department spokesman Patrick Ventrell told reporters on Friday, a day after Hamdallah submitted his resignation.

“Whatever happens, it’s important that the Palestinian Authority government remain committed to that effort of institution-building,” Ventrell said.

Fayyad was widely respected in the West for his efforts to curb Palestinian corruption. The former World Bank official was valued as a transparent conduit for foreign aid money crucial to keeping the economically struggling government afloat.

But Fatah politicians eager to control the levers of power berated his ties to the West. Their disapproval of Fayyad, along with popular discontent over high taxes and prices, helped squeeze him out.

Hani al-Masri, an independent Palestinian political analyst, said Hamdallah’s resignation was another embarrassment for Abbas, whose government exercises limited self rule in the West Bank under interim peace deals with Israel.

“This time, he (Abbas) doesn’t have the excuse that the man was propped up by the West or had his own ambitions,” Masri said, referring to political accusations that political opponents often directed at Fayyad, an independent.

Mohammed Mustafa, the deputy prime minister widely seen as having been behind the swift challenge to Hamdallah, is being touted as his possible successor, along with Abu Amr, a former foreign minister.

Under Palestinian law, a replacement must be named within two weeks.

A Reuters investigation in 2009 found that U.S. aid in the form of loan guarantees meant for Palestinian farmers were given to a mobile phone company backed by Abbas and headed by Mustafa.

At the time, Mustafa denied any wrongdoing said the funds were used to help fuel Palestinian job creation. Abbas’s administration did not comment at the time.

Abbas’ most powerful rival, the Hamas Islamist group that wrested control over the Gaza Strip away from Fatah in 2007, said Hamdallah’s resignation showcased divisions that only prolonged the Palestinian political split.

Since the brief civil war after Hamas won legislative polls in 2006, Palestinians have had no functioning parliament or national elections, and a unity pact pledged by Hamas and Fatah in 2011 and renewed this year has yet to materialise.

Wasel Abu Yousef, a top official in the Palestine Liberation Organisation, told Reuters the new prime ministerial vacancy could be an opportunity for Abbas himself to head an interim government of technocrats, pending new parliamentary polls envisaged by the reconciliation accord.